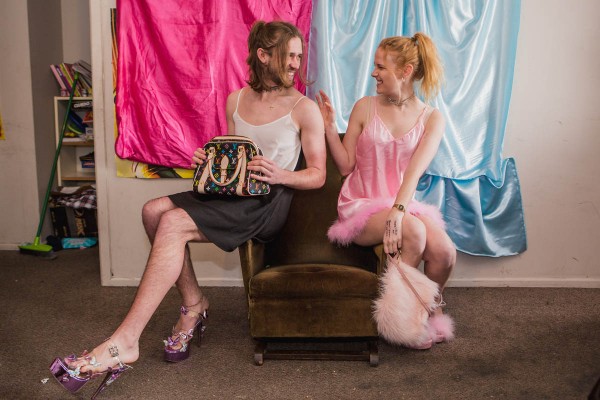 Fashion at Otago University in 2012 meant jeans and puffer vests as far as the eye could see. 2015 saw the rise of the striped top and activewear, a look which became so iconic that everyone was soon afraid to wear it.

In 2018 it’s looking like denim with block coloured tops, minimalist branding, iconography and ambiguous slogans that say something while really meaning nothing; it’s a style built around perfectly replicating the style of others.

Post-ironicism offers a balm for the apathy of a generation that is persistently reminded of what they should be, what they should look like, and how to laugh right. The point of post-ironic fashion is to openly not have a point, or even better, to completely miss the point altogether.

Fashion houses have always ‘back-trended,’ pulling bell bottom jeans from the ‘70s to the forefront of our fashion consciousness in 2006, swiftly followed by pop-culture pick up in Flo-Rida’s 2007 school disco anthem “Low”. The revival or ‘back-trending’ of late ‘90s/early noughties fashion has taken over Instagram. As @virgomood remarked, “I think it just goes to show how fashion comes full circle”.

As the interface for this movement, Instagram has been key to the rise of this non-counter- counter-culture. The social media outlet becomes a platform, a stage if you will, upon which individuals are able to manifest a purified and typified version of themselves, while at the same time maintaining their privacy by creating an alias for their identity. @virgomood started their page back in 2015, “wanting a personal archive of all their favorite pictures, that [they] felt represented [them]”. The motivation behind the collection of post-ironic photos for @virgomood had nothing to do with beginning a new fashion movement, it was merely a personal reminder of self-expression.

@amazonfashionsecrets is a full-time stylist, part-time influencer piss-taker. While they “have an extremely humorous approach to fashion,” they still attempt to the adhere to the ‘look good feel good’ motto. The way we dress is an “important form of non-verbal communication,” but engaging with trends should be a “source of joy, not anxiety”. @amazonfashionsecrets captures the idea of post-ironicism perfectly, continuing to “respond to fashion shows, streetwear drops and influencer fashion,” while maintaining that, at the end of the day, “pants are pants”.

On one hand people have always looked back to old fashion trends that anchor them to their own past. On the other, a whale tail tramp stamp will always turn heads. What can be more ‘fashion’ than just getting attention? What do millennials want more, in a world of growing populations, of overstimulation via the media, and the stress of competing for reduced availability of resources, than to be noticed, than to be human, to mean something, and most importantly, that everything not mattering any more stops mattering?

@amazonfashionsecrets, @virgomood and @shesvague remind their followers that finding a look, crafting an identity and curving the trend is about “perception, how much you tilt your head until something you consider dead and gone looks new and fresh again”.

In our post-ironic world everything is serious; it is so serious that it’s lost all reason to be serious anymore.