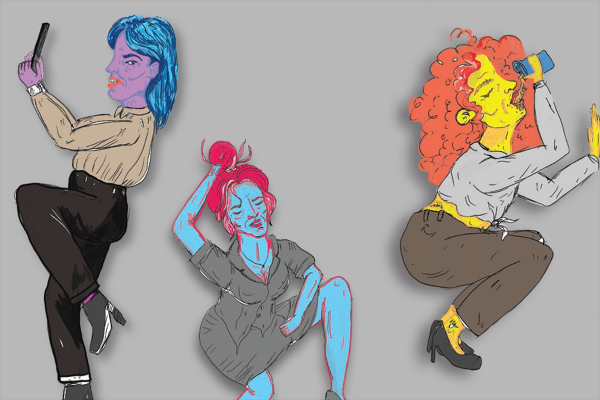 A couple of Fridays ago, I had the divine honour of seeing Dave Dobbyn live at The Cook. Aside from all the whipping and inappropriate “CHEEEAAAAHOOOOOS” that occurred, I felt myself more captivated by the audience around me than by Dave’s performance. We were the youngest in a sea of middle-aged white mums, all who got a babysitter for the night and were ready to let loose. There were mums dancing on the tables, mums silently weeping along to Welcome Home, and even the mum who passed out in the bathroom. After taking in all the surroundings with some light ethnographic research, I have curated a detailed guide to the average wine mum.

Shiraz Sharon is the ringleader of the wine mums. While she may seem all neat at the PTA meetings, she’s a freak when the bottle of Shiraz is cracked open. Sharon is your average white middle class mum. She drops her kids off to school in her husband’s crisp SUV, before running late to her reception job at the local doctor’s office. She works hard, is a loyal wife, but also knows how to bring the party. After a few glasses of Shiraz, it’s all over for Sharon. She hijacks the wine and cheese night to start inappropriately dancing to Rock DJ by Robbie Williams. She pre-emptively books the party bus so everyone can go sink a few down at Vault 21. She always initiates the back seat conversation with the taxi driver before flirting with the bartender 15 years younger than her. She holds nothing back, she’s not afraid to dance on the tables and make a fool of herself. She deserves to let herself go, and boy does she go hard. You’ll surely see the other wine mums holding Sharon’s hair back after mixing too many drinks. But she’s a fighter, and won’t let any bouncer hold her back. Sharon is always the one to watch.

Pinot Gris Paula is the underdog of the wine mums. She’s the slow burner, usually pretty timid at the pre-drinks but not afraid to let her hair down after some glasses of The Ned. Despite her age, Paula is seemingly techno-savvy. She’s going wild on the Facebook story, documenting all of her fellow wine mums’ actions and mistakes. Paula is the typical twice-divorced wine mum who isn’t afraid to have a little fun. She knows herself, and knows how to cut some mad shapes on the dancefloor. She is the one that knows the mood of the party, and has a perfectly curated queue on the Spotify playlist. Once a few glasses deep, Paula makes sure to clear a space for the perfect dancefloor. She is sure to post a selfie with her gals on her Instagram, with only the most appropriate filter and hashtags to accompany it. Once in town, Paula is who everyone wants, and wants to be. She owns the dancefloor, with freshers from Studholme constantly trying to buy her drinks. While she comes across as very conservative when sober, she finally knows her worth when with the girls.

You’ll never see Susan without a glass of Cleanskin in her hand. I mean, she deserves it after taking care of all four kids while managing the hottest real estate property firm in the lower south. Sauvignon Blanc Susan (also referred to as Sav Sus) is the one to watch. Her and her best friends Shiraz Sharon and Pinot Gris Paula not only run the school’s PTA, they own it. Susan works hard and knows how to treat herself on a Friday night. While she goes hard on the platters, she will often duck out of the party to text her younger side fling to meet her in town. Susan remains always in the know, and becomes the hivemind of the wine mums’ events. She keeps up with the latest trends, and is generally liked by all the other wine mums. She knows her worth and is not afraid to flaunt it in town. She’s sensible enough to not dance on a table, but knows how to slut drop when necessary. Sav Sus never has to pay for her own drinks, as long as her husband doesn’t find out. She embodies a perfect mix of sophistication and trashy wine mum that we all hope to be one day.

Merlot Margaret is generally the oldest of the group, but she doesn’t let her age define her. She’s been around the block, and knows how to tear the house down. Don’t let her Minions profile picture fool you, Margaret knows what’s up. Margaret likes to think of herself as a nice bottle of Merlot that gets better with age. After quietly sipping on some Oysters Bay, Margaret spends the whole time remising about her youth. She recalls her wild days as a party girl on Hyde, and secretly wishes to be back in her prime. Margaret is counting down the years till her retirement, so tries to go as hard as the other wine mums before it’s too late. Although Margaret is more a sit down and gossip wine mum, she still knows how to pull out the Macarena when necessary. She’s the kind of wine mum who you don’t want to hear her thoughts about politics on – unless it involves who keeps throwing their grass clippings over her side of the fence. She will accompany the girls for their adventure into town, but she hopes that the night will wrap up before 10pm so she can go home and watch One Born Every Minute. Margaret is a character, and will surely show up to your house an hour before everyone else with a pack of gingernuts and some gossip for all.

Lindauer Linda is probably the shadiest of all the wine mums. She’s the mum that will rave about your chocolate lava cake to only bitch about it when you’re not there. She wishes to be like Shiraz Sharon but is constantly living in her shadow – which grinds her gears. She has an opinion on everything, and isn’t afraid to express them after a few glasses of Lindauer. She constantly brings up shady memories to assert her dominance, like the time Paula accidentally slept with Karen’s husband. She takes pride in her knock-off Louis Vuitton clutch and tries to assert her social capital in as many ways as she can. She is always bragging about her children’s latest grades in school in the most condescending manner. Most of her conversations start with “oh my god, did you hear about….” that ensues a large gossip fest among the wine mums. She causes petty drama to avoid dealing with the problems in her own life, such as her crumbling marriage. She gets jealous of all the attention the other mums receive, which causes her to drink more glasses of Lindauer and create an embarrassment of herself in the middle of Inch Bar. She is generally the outsider of the wine mum clique, but will always find a way to invite herself to the next wine and cheese night. Her ‘can I speak to the manager’ haircut or family car stickers won’t save her now.

Diesel Debbie is by far the loosest of all the wine mums, for the fact that she doesn’t even drink wine. She’ll show up an hour and a half late to the pre drinks, with the smell of Diesels and Winfield Blues on her breath. She’s the rebellious one of the group that always knows where to find the latest party drug of choice. Once the music starts pumping, she hijacks the aux to play her favourite Guns N’ Rosessong that reminds her of her first husband. She lets her true colours shine, flaunting her new tramp stamp she got the weekend before. Diesel Debbie is always down to party, but would much rather go to the likes of 10barto pick a fight with some 18 year old freshers.She really knows how to get the party started, often through oversharing details of her personal life that no one really wants to know. No one knows what Debbie does, but that doesn’t even matter. All they know is that she brings a unique style of boganness to the party for everyone’s entertainment, as the wine mums live vicariously through her.