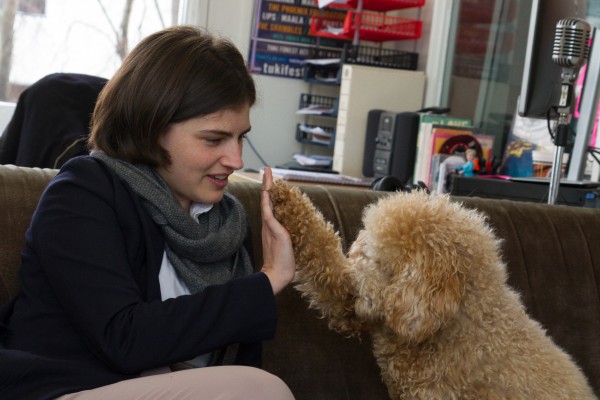 Chlöe Swarbrick says she’s “the perfect flatmate”. She’s out the door of her Wellington flat at 7am and back after 11pm. She has no time to cook, so never leaves dirty dishes. That is, of course, because she’s a Green MP in an eight-person caucus and handles nine portfolios.

Swarbrick’s age was not something we talked about when she took the day off  Parliament to be at the University of Otago. And yes, it’s been said a million times. But I’m going to go there, because Swarbrick’s life is very different from your average young person. Most university educated 24-year-olds have relatively few responsibilities. But Chlöe Swarbrick is an elected representative of the New Zealand people. To me, that seems like one of the biggest responsibilities you can have.

And she takes it seriously. Swarbrick says she has a “busy breakneck life. I thought I’d hit peak busyness a few years ago. My dad ripped me out for sending a Google Calendar invite to go to coffee. But now I have someone else to look after life and correspondence. It’s pretty good actually. I get to do the fun stuff rather than the admin.”

She showed me her schedule – it’s packed. Tim, her Executive Assistant, puts in little dinner slots for her, because otherwise she forgets to eat. The day before we talked, she debated five bills. I asked her if she manages to sleep and she says “not much.” Fellow Green MP Julie Anne Genter sometimes tells her off for not getting enough sleep.

Being in politics is a job she clearly loves. I had to drag her away from convincing freshers to run for local government at the Green Party stall at Clubs Day. As we sat down to talk, Swarbrick saw on Twitter that a bill she inherited from Mojo Mathers, the Election Access Fund Bill, got randomly drawn for debate from the Members’ Bill Biscuit Tin. The bill will create a fund that can be used by any disabled candidate to cover disability-related costs of standing in a general election.

She called Tim straight away: “mate my bill got drawn, fuck that’s so cool. So good! So good!” She was stoked about this for the rest of the interview.

The bill passed its first reading with a unanimous vote in parliament, and now is in select committee awaiting a second reading.

Swarbrick’s had a string of jobs she’s loved. “I haven’t had a CV for a few years now as I’ve been self-employed. I deleted LinkedIn because of all the bloody emails.” I’ve heard her criticise neoliberal capitalism in the past. But, she has benefitted from it. She’s started a string of businesses, benefitting from New Zealand’s few barriers for entrepreneurs.

After working in retail, Swarbrick started up her first business with her boyfriend, Alex Bartley Catt. Google ‘The Lucid Collective’ and you will find a photo of the very windswept pair on the New Zealand Fashion Museum website. After that, they started What’s Good, an online publishing company that grew to have forty contributors. She also started TIPS, a digital marketing and copywriting company. In 2016, she and Alex opened Olly, an art gallery/cafe/doughnut shop in Mt Eden. All the while she was hosting on Auckland student radio station bFM and studying two degrees. “I finished my Law and Arts conjoint in four and a half years doing ridiculous amounts of papers. I did twelve papers in my last year. The marks weren’t fantastic, but it was just about finishing the degree.”

Then, she ran for the Auckland mayoralty. It’s not a stretch that she shifted from media, fashion and art to politics. There is a pattern to it all: she wants to bring people together.

Take her public, but unsuccessful, mayoral race. She didn’t run on specific policies. Instead she asked what Aucklanders wanted to change about the city, bringing people together behind their own ideas.

She says she made the switch into politics as she was “so sick of waiting and interviewing politicians and not feeling there was truth or passion in what they were saying. They were upholding something that felt so broken. I want to change things.”

“Politics was not the intention. If you told me [hat’s what I would be doing I’d say that wasn’t part of the plan. But things kept escalating. I have a problem with saying yes to stuff.”

At the heart of it she says she likes solving problems. “And I’m bloody lucky to have a job that has the potential to do that.”

I wouldn’t describe our conversation as an interview. I asked a question and Swarbrick talked. For a long time. She was full of optimism, enthusiasm and tangents about “nerdy” topics she’s passionate about. It was interesting. But she was packing in so much detail she was almost straying from the questions. I got the feeling Chlöe Swarbrick is used to having to prove herself.

She says the most frequent criticism she get is ‘how can you be an MP with no life experience?’

She says people presume that she comes from a “privileged stock” and has no job experience. “In response I just tell them to google me, they’ll find that’s not the case. What do you mean when you talk about life experience? An older person doing the same things for thirty years is less open to change and more supportive of upholding systems that they don’t see the disproportionate impact of. Young people are more open-minded.”

Swarbrick passionately defends her place in Parliament. Students today “have grown up in an age of rentals, student loans, expensive education, no linear careers and have interacted with the world so differently from their parents.” She says it is “crucial and valid” they are represented. “50% of the population is under 35 but only two MPs are. We need more young people running and being involved in [politics].” We need to stop telling young people “they don’t belong in that space.”

“Big issues disproportionately affect young people. But I don’t think anyone’s going to give it to us, we have to make [change] happen.”

She’s walked that talk already by fronting change she’s passionate about. She proposed the Misuse of Drugs (Medicinal Cannabis and Other Matters) Amendment Bill, which was the Green Party’s more progressive version of the Government’s Medicinal Marijuana Bill.

It was scheduled for soon after Parliament met again in the new year, which was a short turnaround to get “respected stakeholders involved”. Swarbrick got Grey Power, (the advocacy group for people over fifty) and Helen Clark to endorse the bill. Although the public gallery was packed with supporters, the bill was voted down at First Reading. She says, “we didn’t win the battle but have started winning the war.”

Swarbrick hopes to spread the message that “health is not a criminal issue” in the lead-up to the Green Party’s coalition promise marijuana referendum in 2019 or 2020. She hopes to see “cross-party” consensus on drug reform, where politicians share ”a baseline of evidence” and avoid “moral panic-esque rhetoric”.

As someone who readily admits to “abusing alcohol as a teenager as a form of escapism from depression and anxiety,” she acknowledges we need to be sensitive to mental health concerns when thinking about drug reform. “When Portugal decriminalised drugs, addiction decreased and tourism increased – but the neglected part of the conversation is that mental health and addiction services rose.”

But, she thinks New Zealand can do cannabis reform right and is still strongly in favour of it. She says, when drugs are “criminalised” it is hard to raise up your hand for help and addiction services are harder to access. “Evidence shows that the ‘War on Drugs’ does not work. It is cheaper to invest in health services” and to treat drug addiction as a “health issue rather than a criminal issue.” “Already we have 400,000 New Zealanders using cannabis, with 42% using it for health.”

Swarbrick’s Election Access Fund Bill has now gone to Select Committee and she says people are starting to listen to her because “I have been working my butt off” in “every element of this job. In Select Committees, if you’ve done your homework it shows, you can demonstrate you’ve done your research in the House and it affords you respect every time you perform.” And, of course, “a lot of work is done outside of debate” in “deeper conversations” and “shifting public opinion.”

Despite her hard work, Chlöe Swarbrick doesn’t see herself as a trailblazer. “I have such a privileged position. Jeanette and Rod (first co-Leaders of the Green Party) and all the MPs who have come before me had to fight so hard to get into a system that consistently rejected them.” Politicians “spewed out the dope-smoking narrative” and didn’t take the Green Party seriously.

“Like any movement for change, if you stay and normalise your presence, it makes it easier for the person who comes after you”.

To others thinking of following in her footsteps, she says, “your starting point shouldn’t be becoming an MP, you should want to change things, and there are so many different ways to do that.”

She doesn’t think she’ll be a politician forever. “I would be quite happy to blow up my job if it was a catalyst for something bigger.”

Really, the ultimate goal is to “make politics cool.”