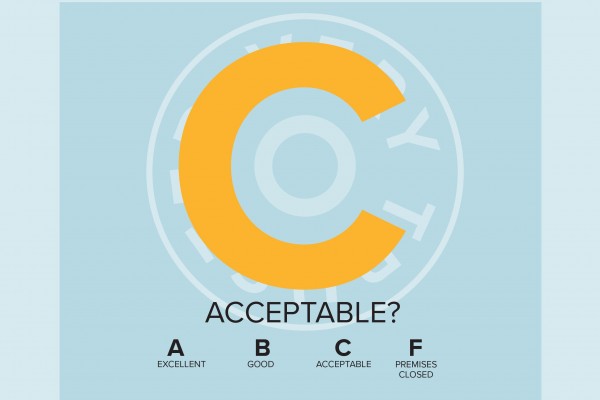 Our intrepid reporters put their lives on the line to bring you cutting edge reviews of the eateries that Dunedin’s Health Inspectors have deemed least safe for human consumption.

This place is weird. As a bakery/Japanese restaurant, The Bin is arguably the most ambitious crossover since Infinity War, and it doesn’t live up to the hype.

By day, The Bin is a pretty standard bakery with pretty standard bakery food. By night, it inexplicably starts serving Japanese food in a strange, poorly lit side room. It’s basically a long, wide hallway with a toilet at the end. The walls are white on all sides. There are no windows. There is no bar. It’s just a square room filled with tables. It looks like the most depressing date night ever. Also, the menu font is Jokerman, a typeface so horrible it puts Comic Sans to shame.

There’s also a strange room hidden off to the side which clearly used to be an office. Next to an empty shelf is a small round table where a despondent man sits alone, eating a pie while gazing out the window at the wondrous world of South Dunedin.

Their C-grade health rating sign was conspicuously missing from view.

We ordered a steak & mushroom pie with a cream bun and got the hell out of there. The pie was cheap, at just $3.80, but you get what you pay for. Not terrible, just standard. The gravy was pleasantly rich and thick, but the mushrooms seemed undercooked and not very well integrated into the sauce – as if they had been added right at the end. The pastry was pretty average. More doughy than flaky, and without much structural integrity. About what you’d expect from a local rugby clubroom.

The cream bun was a winner. At an affordable $3.50, the cream bun was easily the highlight of our visit to The Bin. It was dusted with cinnamon sugar, which was a real game-changer and a huge step up from your standard raspberry icing operation. Overall a pleasant experience, however it does make you feel a little queasy afterwards. Possibly from the abundance of dairy, or the fact that the restaurant had a C-grade health rating. I guess we’ll never know.

We stood in this place for all of 30 seconds and genuinely feared for our lives. I don’t know if there is a single place on the planet that epitomizes South Dunedin quite so well, other than Heffs “Sports Bar”.

The King is a low cost supermarket with a “get stabbed in the kidney and get a free loaf of bread” deal that runs on Sundays.

The most striking feature was the three racks of clothes located roughly between the frozen foods and the fresh fruit and vegetables. Like, are you a supermarket? Are you an op shop? Are you a pawn shop/drug dealer? They also sold spades for some reason (probably for hiding bodies).

There was a massive ‘Smile, You’re on Camera’ sign as you walk in, and the checkout counter had thick metal bars separating you from the teller, like something from an American movie where people do crimes with guns and shit.

While the place was undeniably filthy (and the back doors were wide open with a great view of the dumpsters), it wasn’t immediately clear why they even had a health rating, considering it blatantly wasn’t a restaurant. After a small scan, we did locate a sad looking pie warmer, which appeared to be their only ready-to-eat food offering. They all looked awful.

We didn’t buy any food, but we did spot potatoes for $0.99 a kilo so The King at least gets a thumbs up for that great deal.

Skyline Sushi – All You Can Eat Salmon(ella)

It seems like an ongoing trend among C-grade restaurants that they seem unable to focus on one thing. Just like The Bin was both a bakery and a Japanese curry place, and The King was a grocery store that sold both clothes and methamphetamine, Skyline was attempting to be a sushi place, an all-you-can-eat buffet, and was also running an international food minimart off to the side.

The buffet was just $18, which seems like a sweet deal, but was let down by a lack of food. There were like five bowls of stuff to fill your plate from, and not much food in any of them. One was just hot chips, the other was a massive pile of sushi literally covered in what looked like gravy. Upon a poking, it moved like a piece of wet rubber.

We opted for the six pieces of sushi for $6.50 deal. Pretty standard pricing in the Dirty D. Plus, you get to pick whatever bits of sushi you want, so that’s a win. We went for the “one of each” approach. The crispy prawn was probably their best offering, and they earned big props for not skimping on the salmon. There was probably more salmon in that one piece than every student flat in North D combined.

The crispy chicken and teriyaki chicken were pretty standard fare, if a little tough. The vege piece was boring, but that’s to be expected because vegetarians are boring. We didn’t trust the tuna, so we left that to fester on the footpath.

The C-grade health rating sign took a bit of searching to find, but was visible on a side wall behind the espresso machine.

Thrive – Something fishy going on here

Thrive was most definitely not thriving. Located opposite the Dunedin Needle Exchange and surrounded by apparently abandoned buildings, it was sure to be a fine establishment.

With a rustic wooden exterior and sleek olive leaf logo, it looked clean and classy. Inside we were greeted by a small eating area of three white tables with cute blue chairs. The menu was handwritten on a blackboard, giving it a nice homely feel. The lady behind the counter was lovely and engaging. She made it feel like home, and the one other customer there was a tradie having a great old yarn to her about the All Blacks.

While it was nice by C-grade restaurant standards, it wasn’t what you would consider a high-end cafe, so we were a bit taken aback by the pricing. $3.50 for a little piece of lolly cake and $5.50 for a chicken pie! Most outrageous of all was $2.50 for a single cheese roll. It’s a piece of white bread and some cheese sauce, for fuck’s sake.

We opted for the lunch special, which was a $7 fish pie. That was a very bad choice.

For a start, it just straight up wasn’t a pie. There was no top. It was slop in a bowl, next to a couple of scoops of mushy mashed potato. It looked like cat vomit and smelt a bit like it too. It definitely seemed like it had been in one of those tinfoil reheatable meal containers and she poured it into a bowl before microwaving it for us (to her credit she nailed the microwaving, perfect temperature!).

There were some absolutely bizzare culinary choices made in the construction of that ‘pie’. It was full of what was clearly just a bunch of corn, peas, and rubbery carrot from a frozen vege pack. There were two hard boiled eggs just thrown in there, which is definitely not something that any fish pie needs. They felt and tasted like car tires.

We were unable to identify the fish on our own. Upon questioning, we were informed that it contained “Tuna and um… smoked. Smoked fish.” The answer did little to settle our stomachs.

The flat white we ordered wasn’t served in a proper tulip cup, it was just a regular $2 Kmart mug. It was very nice though.

We were pretty hungry again about 40 minutes later. Probably because of the tapeworm.

We didn’t see a C-grade health sign anywhere, but just as we stepped outside we did see a Hertz minivan full of the All Blacks, so that was cool.

We arrived at our final destination back in the safety of North Dunedin with optimism in our hearts, only to find the windows of Thai Fusion covered in newspaper. Something must have happened. Maybe the impact of the C-grade health rating was just too much.

A truly devastating blow, as Thai Fusion was an absolute establishment, with a very reasonably priced $12 lunch. It was clean, modern, and the staff were super nice. Truly a great loss for our small town.

My memories of this place are mostly fond. It was an excellent place to break up with someone (can attest to that personally). And they did a great Tom Yum. The food was decent, they did all of the standard dishes expected of a Thai restaurant, the Indian lady at the counter was basically a mum away from home, and you could grab as many mints as you wanted on the way out.

To the owners of Thai Fusion: If you are reading this, we hope you come back soon and up your health rating. We love you.