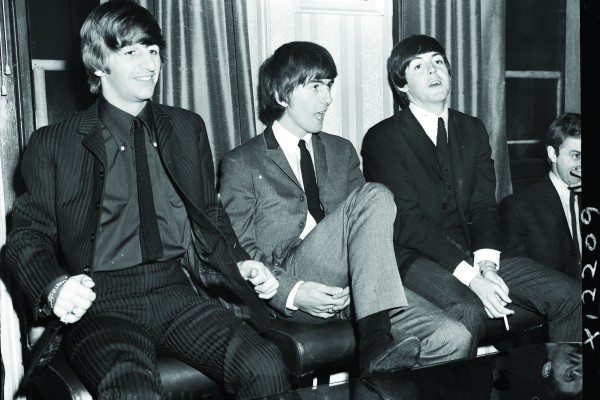 We Crashed The Beatles

Well, we did it. We sent two of our intrepid, expendable reporters to the City Hotel – not to join the rest in the boozer – and told them to “see the Beatles.”

What actually rocked us on our heels was that they did. Our newspaperman and news hen walked in between the barricaded fans, crept surreptitiously upstairs and wilted in front of the biggest line-up of plainclothes detectives they’d seen since the powers-that-be caught up on Bias.

But no, nothing ventured nothing won, they eluded the pursuers and found sanctuary in Lou’s and Simon’s room. But when all four ventured out they were caught by the chief of security for the tour.

But our girl Friday stood her ground and assured the gentleman she didn’t have a revolver in her handbag. Eventually he relented and our friends went in.

The interview room was so full of visiting reporters and radio people that our bemused staffers thought they’d have more chance if they joined the crowds chanting, “we love you Beatles” all the way down Princes Street.

But they did get an interview and Critic editor while in a delirium said he’d print it on page four. And that’s where it still is. And our reporters are accepting offers for Beatle autographs and a cigarette given them by Paul McCartney.

There we were – upstairs in the City Hotel, in a room crowded with newsmen of all varieties – everyone, except us, invited and let through a massive security cordon.

Then the Beatles came in. Once the bedlam started we were kept busy trying to keep our ears open to three concurrent conversations. We succeeded. And here, in no fixed order whatsoever, we print, daring the wrath of Capping Book, Noonan, Critic Editor, our readers and the world, our interview with The Beatles.

ODT Reporter: Could you tell us which one of you is which?

George: If you don’t know by now you shouldn’t be here.

With a casual ‘hi’ they sit down and apologise for John Lennon’s absence.

“Sorry, Johns got a sore throat – he’s upstairs all trembling on the floor,” says George.

Critic: We hope you had some food before you came down?

George: Oh yes, we had plenty to eat – a whole biscuit. The boys were all offered a drink but, except for Ringo, stuck to coke.

Paul: We’re a bit disappointed with the weather. I always thought the further south you got away from England the warmer is would get – but now I realise that we’ve been travelling down so it must get colder.

At this stage the Beatles offer everyone cigarettes. George lights ours with a gold cigarette lighter. We notice Paul’s hair particularly – he tells us he washes it every night because it becomes curly with sweat – “and I don’t like that”.

By now all our cigarettes are lit – except the ones we’re keeping to sell.

George: I like this brand ‘cause they’re the ones with the L.O.N.G. filters

Critic: Does it worry you that all people smoking over 20 a day may get cancer?

Paul: You don’t believe that do you – don’t you believe it.

Paul: Organised wildness is fine, like on stage 0 we’re up here and the audience is down there. That’s fine. As long as the barricades hold.

Critic: What is the main thing you want on holiday?

Paul: Only one thing – sun. I just love heat.

Critic: About your haircuts – are all the stories about swimming in the Hamburg baths and emerging without a comb true?

Paul: Partly. All the German boys had their hair fairly long and we just grew ours and it just came naturally. We didn’t plan it as a gimmick just like that.

Critic: Do you ever buy clothes off the hanger?

Paul: No, they’re mainly tailor made. Do you want to see the label?

At this point Paul opened his jacket and showed it to us.

Critic: Do the officials ever have trouble getting in to your hotel?

Paul: Yeah, the conversation usually goes like this – Official: Excuse me, could I get through, I’m with the Beatles? – Police: Oh sure, we believe you.

Critic: Do you ever take pills on tour?

George: Oh no – we aren’t drug addicts or anything like that. We may use the hypo or marijuana – but pills – never.

Critic: What place do you like most in the world?

George: Oh, all the Britain and of course Liverpool although we’re never there much now. Although I loved Miami as it was so hot.

Critic: What do you think of your new record “cry for a shadow”?

George: its awful. We only recorded it as a joke. We know this ‘ere German group that played like the Shadows and this record was just done for a laugh.

Critic: Ringo, how was hospital?

Ringo: Great, eight wonderful days. Every time I pushed the bell I got a different nurse.

Critic: Is Brian Epstein worth his 25 per cent?

Ringo: Every penny of it. If it hadn’t been for him we would still be playing in local clubs. He’s worth every penny.

Critic: Do you have many press agents?

Ringo: No. Everyone seems to think we have thousands but really we’ve only one and a tour manager. In fact, very few people travel with us.

Critic: Why did you come to New Zealand?

Ringo: We had nothing to do with it – we just go where we are booked. We don’t do anything at all except sing.

Critic: What do you think of Beatle wigs?

George: Atrocious. Have you seen those plastic things? We get 2d a wig or something daft like that.

Critic: Do you think the fame will last?

George: We would like to think it could. We hope to keep writing songs when we’re finished with the initial fame and mania. At the moment we have 60 songs on record.

But among the trade secrets we found out was that none of them can read music. The Beatles just think up the tunes and play them on their guitars. Then the tunes are taped and later transferred to sheet music. Everything’s done by ear.

Paul: The crowd outside the hotel could have been more controlled, though they’re quieter than Australians. Still, the gap between the two lines of screaming girls was the smallest I’ve ever had to dash down to a hotel foyer.

Critic: What do you think of students?

Paul: Students? They’re just people like the rest of us, and it’s good to see you Critic people along.

Critic: Is your hair too long?

Paul: Sea, sand and swimming. I thought I was going to swim while I was here but I didn’t realise you were so low – like on the underside of the world. It’s too chilly in Dunedin.

Critic: Do you approve of people selling the sheets you slept in?

Paul: As it was for a good cause I think it was okay.

And that’s our lot. We weren’t meant to be there but we got in. Their tour manager congratulated us for our initiative and the boys seemed to get a kick out of somebody cracking the security cordon so it was no skin off anyone’s nose in the long run. We’d be willing to do it again.