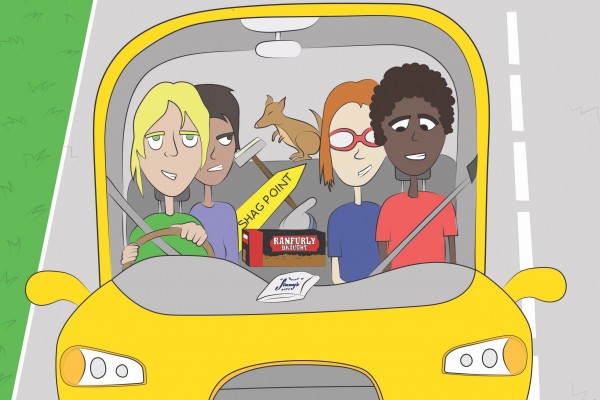 The Critic Guide to the Shit Towns of Otago

Has singing toilets, which are an extremely common thing in most reasonably-sized cities, but for some reason are considered a tourist attraction here.

The Wikipedia page lists it as “one of the country's most important apple growing regions,” which is the only time “important” has ever been used in the context of Roxburgh.

The Fish and Chip shop does a Thai green curry pie for $3.

There’s a watchmaker’s shop with a big clock on it. The hands are frozen in time. That is a metaphor for the whole town.

Crowned itself the “Curling Capital of New Zealand,” a title that no one else pursued or even wanted.

The “Activities” page on the Naseby tourism website includes “Cemeteries”. Although in fairness, dying is the the highlight of most Naseby residents’ lives.

According to Wikipedia, “Ranfurly lies close to the heart of New Zealand's curling-playing region,” which is another way of saying it is close to Naseby.

Is the namesake of probably New Zealand’s cheapest and most mediocre beer, Ranfurly Draught. Fun fact about the Ranfurls: in 2010 they made an embarrassingly terrible attempt to rebrand as an upmarket ‘Station Pale Ale’ and ‘Frontier Lager’. They were very, very bad and failed miserably.

They have a big sign of their name. It makes them feel special. Mosgiel Taieri Community Board member Martoin Dillon said it was “known throughout the world,” which is not true. Another member, Blackie Catlow, said “it’s where you find Mosgiel,” which is true.

Last year, the ODT described Oamaru as “the last bastion of the old-school New Zealand man, his masculinity undiminished by feminism, proudly leaning an elbow out the window of his van to yell, ‘Hey, sexy!’ without fearing a clobbering”.

The same article also calls Oamaroovian men “Chivalrous and decent,” and includes the line “Chopping firewood, digging trenches: all the things that men everywhere used to do before women told them to stop because it was sexist, Oamaru men do them.” Most feminists would tell you that chopping firewood was not their primary issue.

The new hometown of The Wizard of New Zealand, which is a genuine real thing that the government appointed.

It is the Steampunk Capital of NZ; awful middle aged people dress in pseudo steam punk garb every weekend and think they are being edgy.

Is the hometown of Mark Henaghan.

Nobody knows what the word Timaru means. It’s not a real Māori word. It was made up by Europeans to sound Māori.

Produces Flame beer, the only brewery in New Zealand entrusted with the recipe, which was originally created by Trappist monks in a secluded monestary near the top of the Pyrenees.

Still coasting on the fact that Phar Lap was born near there.

The thing Waimate promotes the most about itself is that it has wallabies. Which are a pest in Waimate. The best thing about Waimate is a bad thing.

Was literally used as an example of somewhere inbreeding would be likely to occur in a Health Sci lecture a few weeks ago.

White people pronounce it wrong but then correct you when you say it properly.

Most iconic landmark is some cement on a hill that looks like a fat, misshapen horse. It cost $240.

Probably the only town in New Zealand whose economy is still driven by people who stop off on their train journey to the big city.

The Middlemarch Singles Ball is the most lit thing ever and you should definitely go.

They have Line Dancing twice a week at the community centre. Mondays and Wednesdays 1 - 3pm.

Notorious for the big fruit and being the only town to bar up for being mentioned on the Shit Towns of NZ Facebook page.

Main attractions: big fruit (duh) - peach, pear, apple and apricot which looks suspiciously like a bum. Every few years it gets repainted which always kicks up a huge stink with the locals who all have their own opinions on what ripe fruit should look like.

If you kick the lights hard enough in the greenways they shut off for a few seconds, which is a popular pastime when walking home from the pub.

A great place to settle down and get married. And if you’re single, don’t fret: you can find your future wife/husband at your family reunion. Your nine sisters and twelve half sisters are waiting for the opportunity.

Named after the middle name of Sir Thomas Browne, Governor of New Zealand 1855-61.

Notable residents include physicist Roy Kerr, who mathematically proved Einstein’s theory of spinning black holes. Gore is kinda like a black hole, except nothing is attracted to it.

The town slogan is “The Town of Opportunities”. There is a significant meth problem.

The town’s only features are an abattoir and a prison.

Was supposed to be called Milltown, because there were mills there. They messed it up because no one there can read or write.

Notable residents include Daryl Tuffey, former Blackcaps opening bowler and the only person to ever get hit for 14 runs off one ball.

There is a massive kink in the road, probably because they messed up building it, but nobody knows for sure.

The town slogan is “Big River Town,” which sounds like it was written by a caveman.

There is a bridge.

Wikipedia lists the drummer from the one-hit wonder kiwi band Steriogram as a notable resident.

The Māori name for the area is Iwikatea, literally "Bleached bones" (a local Māori inter-tribal battle in 1750 left the decomposing bodies of the defeated on display, their bones whitened in the sun). That’s badass.

Their slogan is “Come Enjoy Our Lake”. The lake is polluted and has leeches.

Actually, it’s more of a swamp than a lake.

Despite appearing to be a Māori word, the Māori language does not actually include the letter L.

Local cryptozoologists claim there is a species of otter that secretly lives in the lake. There have never been any verified sightings. Come on Waihola, if you’re gonna lie, at least make up something cool, like the Loch Ness Monster, not a fucking otter.

It’s a Māori word written and pronounced the way a white person would say it (are you noticing a theme?).

Richie McCaw lived there briefly as a child, and they have been riding that wave ever since. He wasn’t born there, and he didn’t start playing rugby seriously until after he moved to Dunners, but hey, it’s all they’ve got.

Palmerston, or “The Palmerston North of the South” as it is better known, is a small town with a medium-sized hill near it. There is a memorial at the top of the hill in honour of some guy who once climbed the hill.

There is a shop on their main road (only road) that sells Nazi paraphenalia.

Palmerston made the first ever NZ to England radio contact in 1924. Technology has not advanced since.

Their local radio station proudly says they “don’t only play country music, we also have a jazz and blues night”. However, they do draw the line at “rap, or anything like that”.

It’s just a small group of rocks and a coffee shop with overpriced touristy crap in it.

The rocks aren’t even that round I don’t get it. I thought they were going to be perfect spheres or some voodoo shit like that. They’re just kinda circley.

Most of the rocks have big cracks in them. One of them was split in half. The Mochachino was very bitter.

Has a very funny name. Is named Shag Point because a lot of people there shag in public and you can point and laugh at them.

If you go there in your very cool high school boyfriend’s car after the Year 12 ball you will become a woman and it will be beautiful.