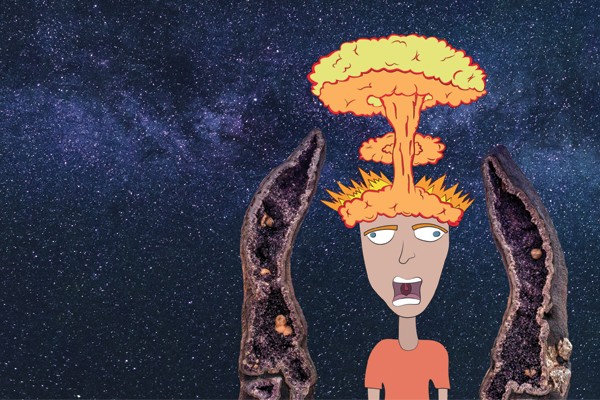 Journey to the Mystic Crystal Castle

Mullumbimby, Australia is not famous for much, apart from Iggy Azaelea and substance abuse. But there is one curiosity which manages to attract visitors from around the world to this shithole town – the Crystal Castle.

The founder of the Crystal Castle, Naren King, celebrated the early hours of 1986 in a house designed by Edwin Kingsbury, a pioneer of Harmonious Architecture. Naren fell in love with the groovy design, which lacked 90 degree angles and included “magical ponds” as a central feature. Conveniently for Naren, it was located directly where two ley lines (magical bullshit energy lines) supposedly intersected. Even more conveniently, the owner had gone bankrupt building the house and it was now up for sale. Such is the karmic nature of the universe. Naren started operating his crystal selling business from the “Castle” and must have eventually discovered that tourists were dumb enough to pay to look at crystals.

Entry to the castle is AU$28 – you may not be able to put a price on peace and tranquility, but the Crystal Castle sure had a stab at it.

Grumbling about the now-sizable hole in my pocket, I wandered into the gardens, to discover some lovely koi ponds and an impressively sized ball of rose quartz (300kg!) slowly rotating, cushioned on a stream of water. Maybe the price of admission had been justified?

Further in, I grooved forwards to two crystal geodes, positioned in front of a mural depicting the road to Shambhala. Obviously the road to Shangri-la would have been too contrived, so a more hipster mythical kingdom was adopted instead.

Reading the information provided, I felt I had been stabbed in the back. These were the two largest crystal geodes in Australia? But all of the advertising for the Crystal Castle had promised record-breaking crystals, depicting a massive geode pair towering over a woman in a wedding dress. Had they hired a dwarf to pose for these photos? My throat chakra was getting seriously misaligned.

Furious, I stormed to the cafe, determined to eat my anger. Lacking any chocolate brownies or carrot cake, I chose the most normal thing in the cabinet; a turmeric slice. Turmeric is renowned as an antioxidant, but I had no idea just how potent it was. I was pleasantly surprised when I went to the bathroom afterwards, and saw that where previously I’d been a little rusty, was now shiny chrome.

In the gift shop I learnt a great deal more about the science of crystals. I had always known that crystallography was an evidence based practise, but I was blown away by the professionalism of the crystalmancer. If your crystal isn’t having any effect maybe it needs to be energised. Crystallography, being grounded in science, recognizes the first law of thermodynamics, meaning your crystals will run out of energy. It’s easy to recharge your crystals – you can bathe them in moonlight, infuse them with incense smoke, chant at them or use Crystal Castle Clearing Essence™, available at the Crystal Castle gift store.

I saw a crystal geode which would have looked sick in my flat, but unfortunately course related costs wouldn’t have covered the $9000 price tag.

I strolled out onto a verandah and saw below me two towering pillars, filled with glittering crystals. These were the giant geodes that had been foretold. As I approached these monoliths of peace, I felt myself becoming enlightened. The air crackled with electricity and a spiritual presence watched over me as I made my way to the base of the geode pair. In my crystal research, I have found that even just standing between crystals of this magnitude can recharge you and even help to open your third eye. As if drawn by magnetism, I reached out to place my hands on the crystals. Upon contact, I felt an immense energy surge through me. The raw force of the crystals was acting. In that moment, I saw the expanse of the universe before me. I felt the connection between all living beings, and I understood the cosmos. I started to levitate as I absorbed all of the wisdom of the universe. I saw the history of the world, from ancient Babylonians using crystals to channel their spiritual energies, to the crystal wars of the late 26th century. The crystals focused my mind and allowed me to unleash the 90% I had never used before. I floated upwards, slowly ascending to a giant, spinning amethyst in the sky.

I have no recollection of what happened next. My next memory is being at New Zealand customs, trying to explain away the ‘ornate glass vase’ in my hand luggage.