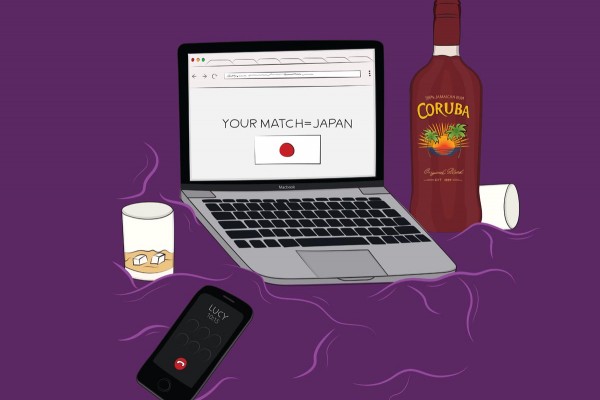 Your Rough Guide to Student Exchange

You can take the scarfie out of North Dunedin, but you can’t take the beer bottle out of his hand

It’s a cold, miserable night in Dunedin. My flatmate Alice and I are on our phones drinking rum. Occasionally we’ll look up to show each other a meme or pour another glass. It’s a simple, well-worn routine, like putting on sweatpants or drunkenly calling your ex. Out of the silence comes an idea:

“I think we should go on one of those student exchange things.”

“Hahaha why the fuck would we do that?

“Because I’m depressed and want to run away from my problems rather than deal with them in a healthy way.”

We empty the bottle.

Basically – as you probably know from having it shoved down your throat at the beginning of your lectures – to go on exchange you pay the same fees as you would to go to Otago. Only you’re not going to Otago and so you don’t have to sit in the freezing abyss of Burns 7 on a Wednesday morning wondering if you’re going to die alone. It’s a win-fucking-win situation.

What you need to know:

Unlike Critic, the exchange program smiles favourably upon Commerce students. Yeah, you read that right. Wanna go to Italy, Austria, Belgium, India, Poland, Portugal, or Thailand? Well too fucking bad, they only offer business school universities. The bad news for Commerce students is that you need to have a B grade average to go on exchange. So maybe nobody’s going to Italy, kids. If you’re a law or psychology major, your choices will be further limited. To be fair, that’s your fault for doing wanky degrees. I feel no pity.

If, at this stage you’re having questions or concerns, there are exchange seminars every Tuesday at 12pm and Wednesday at 1pm, which you’re encouraged to go to. I went to one so you don’t have to. The exchange seminar is held in a weird room filled with various memorabilia of the University clock tower – in case you didn’t already know what it fucking looked like. The presentation just says everything the website says, but you get a charming lady talking at you for half an hour. My touch-deprived self felt a thrill run through my body as the guy next to me passed a pen. I still think about that sometimes.

If you’re worried about the financial aspect, don’t. Otago gives you a free $1000 just for going on exchange. You’re paying Otago fees, and StudyLink will continue to drip feed that sweet, sweet moolah into your outstretched hands. Just pick a dirt-cheap European city – the kind where you feel like you might get murdered when you eat a Danish in the morning – and rent should be a breeze. If you feel inclined to write a shitty blog about your experiences (because everyone definitely wants to read about your time hiking the Grand Canyon) then you could be eligible to get another $1000 for your efforts.

Critic decided that a good journalistic approach would probably be to ask other people about their exchanges. There’s also a whole bunch of info on the website where people recount their adventures – however, that’s basically the clean-cut version you tell your parents (the kind where you gush about how many friends you made and what a life-changing experience it was). There’s no room for sentimental shit here. This is a serious student magazine, bitches.

Craig went to Sweden for his exchange, but travelled around to a variety of places like Canada and America. Compared to Dunedin, he loved “actually being able to afford to go out drinking in bars because the DCC is not being a shit cunt and making business impossible”. Come to think of it, drinking was raised as a repeated highlight for Craig, such as “taking a boat trip to Latvia for a day because it’s super cheap and when you’re in international waters there’s no tax on alcohol, so you can massively stock up at very good prices,” and “drinking my way around pretentious craft breweries in Montreal during the autumn where they actually have trees that change colours and it’s really beautiful”. You can take the scarfie out of the North Dunedin ghetto, but you can’t take the beer bottle out of his hand. Touching, isn’t it?

Gaby and Julia both went to Miami for their exchanges. Why Miami? “Because, well, it’s Miami.” For Gaby, her exchange was basically just shaped around meeting Beyoncé. Honestly Gaby, same. “Highlights were definitely being able to attend Coachella Weekend 1, where aside from the major, MAJOR performances – I was two people behind the front when I saw Beyoncé bust out Destiny’s Child, and I made eye-contact with both Eminem and Dr. Dre because I was at the front of the barrier their night – I met an insane number of really cool people from all different states and countries, and who were so goddamn funny.” Suddenly Hyde Street looks a bit a lame in comparison, not to insult your drunken Instagram stories or anything.

There’s a bit of a culture shock though. Gaby said: “I thought I could handle the American student drinking culture. But where Otago kids could spend 7pm-3am drinking and be relatively alright, parties at my exchange uni go from 9-12pm, because there’s a noise fine after midnight. This means that these kids get smashed hard and so, so fast.” For someone who loves to down some shots and be tucked in bed all before midnight, this sounds like a pretty good time. You can also tell your mum that you really broadened your horizons and experienced other perspectives.

There are other bonuses to going on exchange, notably your academic performance. Julia says: “It’s easy to get As here, and we all know how much work is involved in getting an A at Otago! The level of difficulty for a 3rd/4th year level paper here is pretty much equivalent to a 100-level paper at Otago.” Not only that, you no longer have to make eye contact with your lecturers around campus after you ghosted their tutorials and only got a C+. Thank god.

On exchange, you can choose to flat in the city, or, if you feel like reliving the horrors of your first year, you can typically live in a hall on campus. These halls are filled with other scared shitless international students so you won’t be alone. Or, if you’re like me, you could consider dragging your least annoying flatmate for the ride. Gaby fondly recalls her experience settling in: “Less than two hours after I moved in, I’ve figured out I’m living with eight other sorority girls: one of which I’ve seen their butt, three that were comparing nipple piercings and then their lip tattoos, another with frankly the nicest bong I’ve ever seen. I’m being told a story by a girl, within my first thirty minutes of meeting her, about how she went on exchange to Australia, hooked up with a guy in the back alley, and ate his ass cause he just shoved his ass in her face and what else was she supposed to do?”

Overall, going on exchange sounds like a pretty sweet time. It’s relatively affordable, you’ll get some good snaps for the ‘gram and best of all you’re getting drunk somewhere other than your mate’s half-burnt couch. When I told my friends I was applying to go on exchange, they raised some valid questions:

“Isn’t it bad going to the other side of the world with no support system?”

“I’ll have Alice with me. And fucking cobblestone pavements, man,” I retort.

“Yeah, but Alice is an alcoholic. And you don’t leave your room.”

That aside, it’s important to remember that you always need hope. Hope that you suddenly change your whole personality and start again somewhere new. Hope that you can detach yourself from your crippling anxiety to enjoy the simple pleasures of coffee in a French cafe. It’s the little things that count. So, consider going on exchange. You may not meet Beyoncé, but at least you won’t meet that guy who you’ve re-matched on Tinder five times now. In the parting words of Alice: “Why the fuck not?”