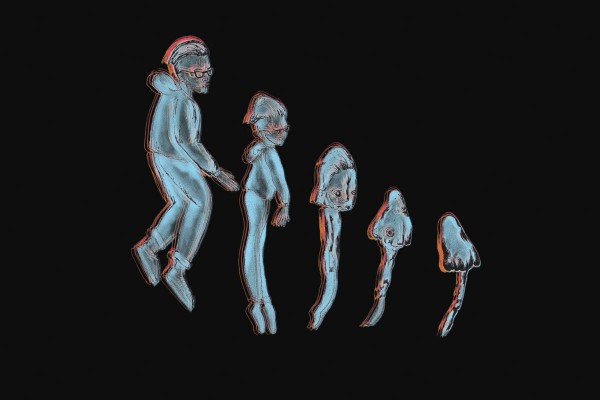 I Took Mushrooms and Went to a Concert, Because Journalism

If there’s one thing that Critic has taught me, it’s that you can do the dumbest shit you can think of, and if you write about it afterwards, it’s still technically journalism. Watch every Adam Sandler movie in a year? Journalism. Wear a fedora for seven days? Journalism. Fuck a guy to smoke his meth? Questionable, but still journalism [“How Wack is Crack?” - Issue 1, 2013]. And luckily for me, apparently so is taking a shit-ton of magic mushrooms and going to Outer Limits.

Originally, this plan had been hatched when Young Thug, a.k.a. Jeffery, a.k.a. SEX was still supposed to show up to Outer Limits. However, as this is the man who wasn’t able to show up to his own music video, it shouldn’t have surprised me that he cancelled his appearance several weeks beforehand. He was replaced by Alison Wonderland, a name with such a shit level of pun that she should be writing for Critic. But as I’d conned Critic into giving me a free ticket already, since they still think I’m actually a journalist, why not go? Sure, I didn’t know any of the bands. But enough of these fun guys (see what I did there?) and it wouldn’t matter who the hell was playing.

There was just one problem. I had no idea just how many mushrooms I needed. Should I take half my stash and hope it was enough but potentially barely feel anything? Or should I take all of it and possibly melt my brain? Faced with a difficult decision, I figured that it’s best to have too much of a good time than a boring time, and decided to eat them all and suffer the consequences later.

We started off at a friend’s flat. Being responsible students, they would not be accompanying me on my descent into decadence. Instead they would be drinking enough alcohol to permanently damage their livers, as God and the liquor industry intended. Somehow the Leith Liquor staff (who I will be bringing legal action against for such awful fucking advice) had convinced them to buy some sort of basil-flavoured vodka, which was really dish soap. Finally we departed, alongside what seemed to be Dunedin’s entire fresher population. We’d hoped Fresher Flu would have culled the numbers somewhat, but unfortunately they were fairly resilient.

Once we finally made it to the line, it was time to get this party started. Once down, you have roughly half an hour before they kick in. This was the worst part of the night as I spent the entire time questioning whether it was kicking in, or if that asshole had just sold me some mouldy portobellos. So, there I was, listening to music I didn’t like, by a band named after a Chinese delicacy. Was this actually going to work? Would I be okay in a huge crowd? How much had I actually taken? Hang on, why does it feel like these lights are moving on their own and pulsing into my brain?

What I hadn’t realised was that, as I questioned whether I was even tripping or not, the mushrooms had snuck their way into my system. What I assumed had been sick lighting effects had just been the start of the visuals. All doubts of the potency were shattered when the screen, which had before been displaying some graphic effects straight out of Windows Media Player, suddenly transformed into a wild kaleidoscope of shifting colours and textures. The music, previously generic shitty EDM remixes (sorry Alison) was now this pulsating, shifting, almost sentient music that was the greatest thing my brain had ever encountered.

Now many people use this point in a trip as a way of reflecting on their inner selves, coming to some sort of revelation about their life, their actions and how they interact with the world. Myself? I just enjoyed the pretty colours and enjoyed my brain going into full meltdown. Time had lost all meaning, and I was struggling to keep track of what was real and what was just the result of the furious fungi. It didn’t help that Dunedin parties and concerts bring out the weirdness in everyone. At times I would stop dancing and just watch the sheer insanity of what was happening in awe. I was a part of this spectacle of ridiculous behaviour, but had convinced myself that I was only a spectator. One lad, who was apparently on some even better shit than me, was going around sucking his friends’ fingers. Two girls, who looked so similar I assumed they were identical twins, started making out; it was good to see that Gore is still well represented at Otago. At one point we were pulled into a mosh pit (how is that a thing at a fucking EDM concert?). My stoned serenity was quickly cut short by about 10 shirtless lads slamming into me, which, as I didn’t go to Unicol, was an unpleasantly novel experience for me. Luckily, my friends came to the rescue, and we relocated to a slightly more clothed section of the audience, where I could resume my slack-jawed staring at everything and everyone. A few people caught me staring at them and assumed I was either trying to fight them and/or flirt with them. Luckily one look at my pupils and they understood that I was too gone to warrant engaging with, leaving me free to find the next light, glowstick or particularly aesthetically pleasing shirt to get lost in.

Finally, it was over. Miss Alison came out one last time from behind her wall of monitors, one of which I imagine was actually doing something musical, to hastily check where she was actually playing, tell us we’d been great, and bugger off. I quickly checked to make sure I still had my wallet, phone and the correct number of limbs. Everything seemed to be in its place, although I did find some blood on my shirt (the origin of which, to this day, I have absolutely no idea). As we watched several determined lads charge into the women’s bathroom, only to be chased back out by its occupants, my group decided that we were going to town, which I enthusiastically agreed to. But to be fair, at this point you could have told me you were going to feed me my own leg and gotten the exact same response. Nevertheless, we were off to see what else the night had in store for us.

However, disaster struck. A female companion’s heels had given up the ghost; the straps had broken off. Some would have taken this as a sign that they’d had a good night, and that it was time to admit defeat and head home. But true scarfies don’t know what defeat is. They can’t even spell it. Pausing only to neck the final bottle of basil-flavoured piss water, she somehow tied the broken pieces together and powered on into the night. Maybe this was actually no big deal, but to my mushroom-muddled mind, this was awe-inspiring.

Town was a blur of music and people. The mushrooms were proving to be a bad influence, and I had to stop myself multiple times from staring at people again, or in one case trying to get close enough to stroke the most beautiful patterned shirt I’d ever seen (upon later consultation I found out it was just a flannel shirt). I had to get away, to take myself somewhere far from others where I could be at one with the world and explore what the mushrooms were telling me. As I set off home, the possibilities were endless. Would I go to the Uni and stroke old buildings and see what they told me? Would I go to the Botans and try to go full bush? Instead, I heard a scary sound near Castle Street, so my night ended with watching YouTube videos of dancing whales synced to Pink Floyd before passing out.

This was a tricky article to write, because either I must be doing mushrooms wrong, or everyone else is lying about them. You always hear about how they cause existential experiences, that you’re transported to another world or have some life changing personality switch. For me they just made shit look cool and made me feel amazing. Although to their credit, they did make Alison Wonderland listenable, which is nothing short of a miracle.