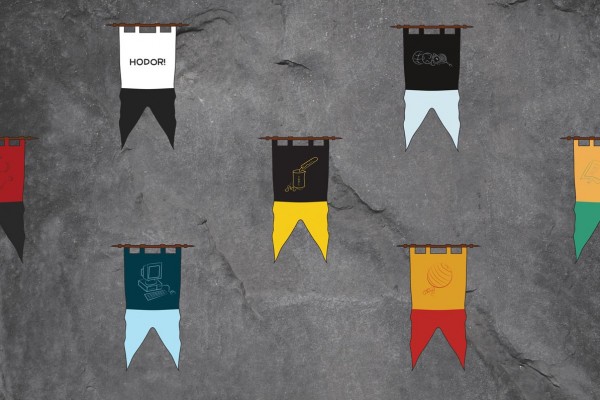 If HBO weren’t being massive cockteases and making us wait a whole extra year, the new season of Game of Thrones would be out by now. But it’s not and everyone is very sad about that.

To ease the pain of not having any new episodes, we fired up the ol’ imagination and paired common degrees at Otago University with some of the Great Houses of Westeros

The commerce students are the ones everyone are rooting for, but fuck they struggle. These champs are the kings in the North (D), earning respect from their peers by being good cunts on the piss and looking out for their mates when winter comes. Unfortunately, like the Starks, many a commerce student’s journey comes to an early end because of their tendency to worship the Old Gods (Speight’s) too hard, landing them in trouble with the Red God (Harlene). These battlers are known for missing every class, sinking piss and rigs that have been sculpted by years of beer pong.

One of the great houses of North D, the dent students are always good company. Their problem is that, like the Arryns, they are often hidden away in their castles studying. When they do come to the party they well and truly bring it, but, unfortunately for the rest of us, these occasions are few and far between. Known for their spunky dark blue uniforms, flossing and slutdrops.

Words: “As High as Honour” – these guys low-key love blazing up.

Pretty loose units, the old pharm kids. Not known as one of the great houses, and all of them low-key wish they were in med or dent – but they’re a fairly positive group, so they just get on it instead of wallowing. They love drugs, they love pissing up, but most of all, they really love drugs.

Golden haired fuccboiz and fuccgirlz rule this department and are known for some seriously incestuous antics (the real reason Law Camp was banned). These units low-key sink a lot of piss but are a little less vocal about it than some of the other groups at uni. Can often be a bit snobby and care too much about what people think. This lot are notorious for being pretentious fucks, pushing kids out windows and just being bad people.

Words: “Hear Me Roar” – we get it, you guys love attention.

Passionate, bullish, alcohol-driven monsters. King Robert would’ve been proud to name this bunch Baratheons. Never in my five years in North D have I met a group of students more likely to scull a jug of SoGos in a show of masculinity. An extremely proud and old house, they are not known for being particularly intelligent folk – but are renowned for their unparalleled love for sinking piss and rooting.

Words: “Ours Is the Fury” – work hard play hard, amiright.

The humble arts students often get shit around campus for taking the easy out at uni, but we don’t think anybody should blame them for that. Like the Tyrells, many arts students hail from wealthy backgrounds and are enthralled by the “finer” things in life, such as literature and art history. Arts students are known for being a very friendly bunch who smoke weed and chill out. This being said, they will fire up if you throw around any sexist, racist or just generally bigoted chat, which is arguably their most admirable trait.

Words: “Growing Strong” – a reference to the Tyrell rose, but for the arts student, we imagine it’s also referring to their bud.

Neither the largest nor most prestigious house on campus, but they’ve got heart. Made up largely of people who gave up in med after first semester but were like, “meh, physio seems chill”. Known for being more chilled out than their cousins in med but are still actual students, as opposed to their cousins studying PE.

The PE students have long been trying to assert themselves as real students at this great university, but let's be honest – they might as well be at polytech. These frothers are known for rowdy get-togethers, drinking cold ones and being undoubtedly the most attractive group in the dirty D.

Words: “PE is hard! We had to do Hubs191 which was basically health sci.”

When the gods created med students, they flipped a coin. They’re either good cunts that balance studying, sinking piss and general good cuntery, or total psycho crazy fucking nerds (you know who you are). Like the Targaryens, med students are very elitist and look down on anyone who isn’t a med student. A notoriously incestuous house, with nearly 40% of doctors marrying other doctors.

Have you ever met a lit comp sci student? Do they even exist? Are they living? One thing I know for sure is that any talk about coding is just objectively shit chat. Known for being very pale skinned, cold to the touch and playing with dragons.

Words: I dunno can they even speak? Is HTML a spoken language yet?

Easily the saltiest bunch at uni with a huge chip on their shoulder. This lot are pretty much just health sci dropouts that have a point to prove to the rest of the uni. You’ll hear many a BSci complaining about how they have to work real hard and do labs and shit, but nobody really takes them that seriously. Known for being salty and overly aggressive, and for not really having any mates.

Words: “We Do Not Sow” – they don’t sow the seeds of friendship, but instead force themselves on others with their obnoxious chat.