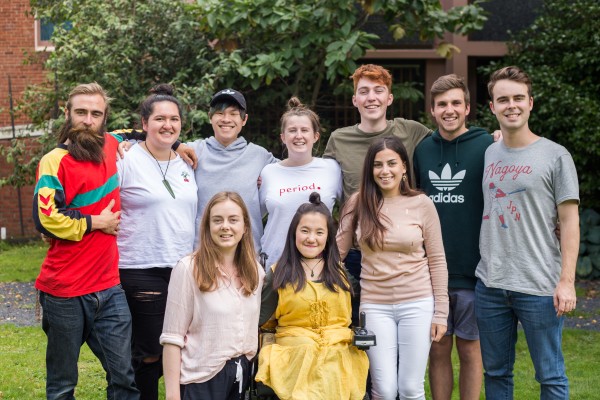 Talking Shit About The Exec For A Bit

Every quarter the OUSA Executive submit reports about what they’ve been doing, which the exec then votes to approve. In order to get paid, they have to have their reports approved in full.

This quarter’s reports were super boring so we had our subeditors pore through them and mark every single spelling and grammatical mistake, no matter how minor, so we could make fun of them. The rest of us looked for things that were just weird.

Caitlin’s report was grammatically shocking. At one point she included a 237-word sentence; Critic’s subeditor fainted at the sight and had to be revived with smelling salts. She also has a horrific habit of using multiple exclamation marks and thinks an apostrophe is a fancy kind of trophy. Pull yourself together Caitlin; you’re not an infant.

“I keep the executive up to date on almost every step of things I do.”

“There have been a couple I have no reported back.”

“Some other meetings I have attended include, but not limited to: learnt to be a good radio host”

Caitlin was also confused about her goals. “I am not 100% on what my goals look like and if they are at all feasible.” One of her goals was getting more for students “to do”. She said the main thing holding her back from this goal was getting “out to students to see if there’s things they would like to do”. She also said that “a concern of mine is the line at UBar”.

Cam wrote the longest report, at 2958 words, because he is a massive nerd.

However, the exec was not impressed with his report. “His is formatted poorly,” said Caitlin, noting that “he didn’t follow the format he sent out”. Abigail also lambasted him over his egregious “missing subclauses”.

Cam wants to ruin the picturesque Otago campus during OUSA election time by having it “covered in OUSA green”. He also uses the term “Student Body” a lot (kinky?). And he says that, “Caitlin gives me advice on how to manage myself,” (also kinky?).

He talks for a bit about how the exec meetings are getting more punctual: “Now that we are into semester, each meeting is shorter and more to the point.” Maybe speaking a bit too soon there, as he then presented this report in a two-hour meeting that seemed like it would never end.

He gave Critic a shout-out on the last page, so he gets bonus points for that.

The best thing about Cam Meads is the amazing joke Re-Creation Officer Josh Smythe told about him in an exec meeting. “What do you call a bunch of Cams standing in a field? A Mead-ow!”

Cam has a calendar of pugs and a ceramic pug penholder on his desk.

As Welfare Officer, Abigail is fourth in line to sit upon the OUSA throne should her superiors all meet an untimely demise; “I would be happy to do so if asked,” she said. Really, Abigail, happy?! Critic would like to officially state that if Caitlin, Sam, Cam, and James were all to die, we would be at least moderately sad. Apparently Abigail would be dancing gleefully on their graves. For shame.

Abigail also reported that, in a startling change of direction, “the Welfare Committee was primarily focused around conversing about student welfare”. Fascinating.

Abigail said that making statements to the media “has not been required of me yet,” which is blatantly untrue, as she has been quoted in Critic describing a painting of Sexy Garfield as “beautiful”.

Despite his stated aim of “making these reports actually consumable by students,” the Critic reporters whose job it was to read these reports couldn’t force their way to the end. We assume it was top-notch though.

Norhan has got this politics shit down. Her report came in at a petite 1431 words, cutting out all the bullshit waffle that some (cough *James* cough) insisted on making the poor Critic reporters read.

Norhan wants to visit every Residential College and says that is “almost complete,” but she is “yet to meet with Selwyn, Te Rangi Hiroa and Toroa”. Honestly, she is probably just avoiding those three on purpose, which we can all agree is fair enough.

Norhan’s also organising a colouring in competition for all the colleges, just in case any freshers out there don’t feel infantilised enough.

She ended her report by using five exclamation marks in the space of five sentences.

Like all good commerce students, Sam put this off until the very last minute, and was the last member to submit their report. (Wait, he’s not actually a commerce student? How did he get this job?).

He says he checks the Association’s invoices fortnightly “to keep an eye on where the money is being spent”. He has apparently not noticed that the “staff training” line in the Critic budget has been exclusively spent at Leith Liquor.

Kirio uses words like “therein” and refers to talking to other students as “liaison”.

He is a member of something very important called “The [CONFIDENTIAL] Working Group,” and says he cannot “talk publicly about the content of the meetings or what the working group exists for”.

He has a number of goals but wants to make it very clear that “I am more interested in the spirit of my goals than I am committed to seeing a single specific vision come to fruition”.

Roger is the Campaigns Officer, a position made redundant by the three full time staff of OUSA’s Marketing and Communications department.

Roger is very enthusiastic. At one meeting Roger seconded and voted for a motion, only to ask later what the motion was for.

As far as we can tell Roger’s main job is making videos talking about what happened at exec meetings. He does assure us that he’s also “come up with and partially planned some campaigns”. “Campaigns” plural seems a bit of a stretch, seeing as he only mentions his plan to clean up Castle Street (an idea Critic’s very impressed he ‘came up with’) and his “Sex Week,” which at the moment consists of only those two words.

It’s appropriate Roger wants to hold a “Sex Week” considering his habit of wearing turtlenecks and bringing women back to the exec offices late at night. That’s right Roger, we see you. We never leave.

However, Roger’s was the shortest report, so we’ve got to give him that.

The Best Re-Creation Officer OUSA Has Ever Had

This was an amazing report. Josh Smith, who renamed himself Smythe because it is cooler, is a fire-dancing, yoga instructing, drug-doing, fantasy man who should be declared emperor of OUSA forever.

His erudite prose flamed with passion and eloquence. He dedicated his report to “the breathas” and “the homies”. He included several emojis, escaping the shackles of words and breaking into a new, undefined and unrestricted form of communication.

He has been “existing in and around Dunedin for the last 7 years,” feeling “the very positive rhythms and relationships,” and “making wonderful and authentic connections [. . .] the communal enthusiasm empowers and invigorates me”.

“Re-Creation is a huge part of our shared and individual existences,” he says, sending a shiver down Critic’s collective chakras.

He concluded his report with a 300+ word meditation on why psychedelic drugs should be legal. Here’re large portions of it verbatim:

“I wish to bring Kava nights onto campus, to start regular alcohol free ecstatic dance parties, and to introduce an alternative to the prevailing hegemony of the abuse of an addictive depressant and neurotoxin [alcohol] that is currently tacitly facilitated on an societal, organisational, and institutional level; causing so much unnecessary pain.”

“There are so many alternatives to this vicious substance that are not currently legal, but the science is rapidly indicating are MUCH less damaging (eg newly emerging clinical peer reviewed literature on MDMA, Psilocybin, LSD, etc) – and potentially even healing/empowering in the right circumstances.”

“The current unregulated status of the market has meant that cheap and dirty research chemicals have started to permeate the black market in this country – seeing waves of hospitalisations from fake MDMA in Canterbury, deaths from synthetic Cannabis in Auckland, and the presence of the super potent and deadly opioid Fentanyl at festivals on or fair shores. How many more deaths will it take before we can have a responsible conversation about this as a society? Our current legal framework is erroneous, and based on an outdated and archaic paradigm.”

“I believe OUSA has a responsibility to our students and to the youth to champion a change to the Misuse of Drugs Act and current legal statuses of the aforementioned substances. As the Re-Creation officer I feel it is my official duty to initiate these discourses, to challenge the prevailing hegemony, and provide alternative recreational options.”

“For the breathas, for the homies, for the sake of students that I know and love so deeply, I recommend that we take a scientifically based critical look at our current perspectives – before something truly tragic occurs under our jurisdiction.”

However, the big old grumpies on the exec refused to accept Josh’s report, demanding he resubmit it. It was a travesty.

“I think a couple of clauses were missing,” said party-pooper Abigail. “Your last three paragraphs for goals don’t contain any goals.”

“It needs to be put as ‘Recreation Officer’; it’s a formal document,” said fun-police Caitlin.

“I was under the impression that goals had to be measurable,” said Abigail, tediously and boringly. “The last three paragraphs are completely redundant,” she said, which is exactly what a square would say.

Despite Josh sitting on four committees (as his job requires), Abigail complained that he hadn’t voluntarily signed up for more. Abigail, no one cares that you sit on 17 committees (we assume; we couldn’t be bothered to count, because, you know, it’s boring).

The exec decided to make Josh resubmit the report. Which is bullshit. Josh is the best Re-Creation OUSA has ever had, and this report is the best quarterly report Critic has seen since the Golden Days.

Critic promises we’re not biased just because Josh has apparently been telling people to “read Critic”.

English is Umi’s second language so we can’t really make fun of her mistakes and her report was actually very thorough and pretty onto it, so that’s not very fun either. We’re just gonna ignore this one.