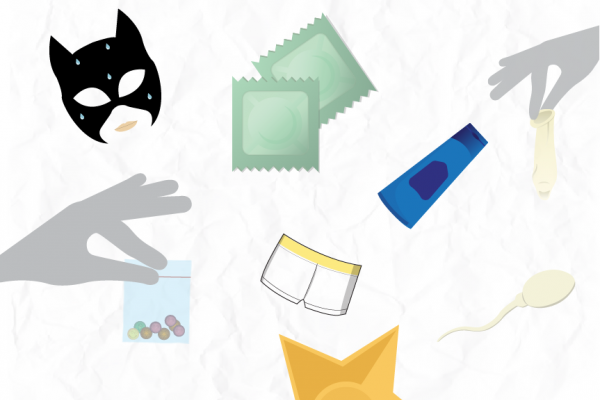 “So I had been talking to this guy on Tinder for months and we finally met up. We hung out and I couldn't decide if I liked the text version or the live version better, so we met up a few more times. Cue the awkward ‘I'm very sober, I haven't had sex for a long time and can't remember if I'm doing this right' sex scene. We move on, talk it out, get past it and start 'seeing' each other on a more regular basis. Now things are starting to get more comfortable between us (but we have probably only spent a few weeks together at this point). So one day I thought “hey let's try something new,” and ask him to hit me. He's all good, gets into it, so I push further. “Do it harder”. Still fine, maybe a little more careful but I could see that he was enjoying the twist. Then I ask him to say that he hates me. He slows down looking slightly concerned. I tell him, “it's ok, it isn't real – it's just role playing”. I try to get him to say it, but he keeps saying “no . . . I can't . . . no”. His sentences keep breaking and then he eventually says it, but with about as much enthusiasm as someone reciting their times tables. Then he gets all awkward and mutters, “but I can't say that I hate you, because I . . . I love you”. And that, my friends, is how the guy I had been seeing for just a few weeks declared his love for me. How romantic, I can't wait to tell the grandkids.”

“When I was in high school I had a boyfriend who would come round a lot. My parents were generally okay with the 'knock before you enter' thing, but sometimes they seemed to go through periods when they were getting a bit slack. Anyway, you probably know where I’m going with this. One day my dad forgot to knock and walked in. He quickly said “oops!” then ran out and slammed the door – only to reopen it a few seconds later and yell through the crack, "isn't it supposed to be the guy on top?””

“I took a gap year, and among my travels I stopped over to visit my friend in Korea – and we went a little crazy on the partying. One night I went home with one of her friends who was extremely drunk, to the point where he just fell asleep by the time we got back to the apartment. A few hours later he was back 'in the mood'. It started off not great and only got worse. He couldn't keep it up, the condom kept coming off and I was very quickly becoming far too sober for any of that nonsense. Then the bastard decided to take the condom off without telling me. Which is just not okay. To top it off, when I tell him that he either has to put on a new one or that it's the end, this guy whispers in my ear (now you have to imagine a very drunk person, with broken English and a seductive tone), "you need to find a new condom so we can have sexy fun time". Nope – that was the end for me. Not enough drinks in the world could fix that one.”

“Picture a fresher in a striped crop top (that’s me), drunkenly catching the eye of a tall, dark, and alright-looking guy over a few street-party stragglers. He comes up, throws me some shit chat about how I’m really pulling off the look. I can practically smell his fresher kink. Perfect. We stumble into his flat. He starts to immediately undress me, letting out a soft “damn”. He says it again a few times as we get into it, until it changes: “damn . . . Daniel”. He says it again, in time with us fucking. He points to a pair of sneakers on the floor: “back at it again with the white vans!” He starts giggling uncontrollably and repeats it a few more times, getting more into it and into me. I jump off him; he asks if I want some of his MDMA in between more “damn, Daniels”. I refuse, leave, and spend the whole next day researching whether you can ingest drugs through cum.”

“I lost my V-plates over the summer, and while nothing too funny happened then, I got a message the other day with the classic “we need to have a chat”. Turns out she had gonorrhea when we hooked up, so I fucking hightailed my arse down to Student Health to get a check-up, but because we used protection I was in the clear. I was shitting myself over it, not a pleasant aftermath of finally losing my Vs. I would definitely advocate safe sex!”

“I was on a family trip with my girlfriend, and we snuck up to the hills for a bit of wild rumpity bumpity, when all of a sudden my girl loses interest; turns out there's a massive skiddy in my underwear! I've never had that before!”

“I was visiting family in Sydney and on a night out I went home with a guy who was quite well-to-do. We got to his place, which was a stunning apartment in the city, he clearly had a lot of money and taste. We’re getting it on in the lounge when he goes to the bedroom and comes back with a bag of cocaine. Never one to be rude, I politely (eagerly) join him in railing lines, and we resume making out. After a while he disappears off to the bedroom again, this time for much longer. He finally returns dressed in a latex suit, carrying a latex hood (think a full head Catwoman mask without the ears). Almost apologetically, he asks me to put it on. He’s a nice guy, I’m kind of kinky and I’m enjoying the drugs, so I happily comply. After a bunch of latexy sex and a bunch more cocaine, I try to remove the mask – but can’t, because I’m all sweaty under there. He tries to help me take it off, but to no avail. In the end, I have to jump into a cold shower wearing the damn thing in order to cool down enough to get it off! Still worth it.”

“When a friend was staying with me in third year just up Queen St, there was this flat party a few houses down. I took this bird back to our place and we were in the bedroom and I was quite drunk, and I thought that my friend who was staying with me had some lube with his stuff – except, unbeknownst to me in the dark, it was actually that mint green shower gel. And I put it on, and we started going and then I asked her, “do you feel that burning?” (she did). So we had to jump in the shower straight away. And now my mate religiously tags me every year in one of those green shower gel posts.”

“A mate of mine’s flat used to do this competition. It’s a bad thing to do, but they’d say “how much for the girl?” and the worse the girl looked, the more points they’d get. It was a Thursday night and there was this really dusty setup that came up, and my mate said to his flatmate, “if you dust this girl, I’ll give you 150 points”. So he dusts this girl, and wins the week hands down. And there were good prizes to be won, like no cleaning the flat or cooking for a week, that kind of thing. But the kicker is that he’s with that girl now – because he knocked her up that night and they have a kid together. And she was the dustiest setup that they’d ever come across.”

“I’m from Twizel and I went to Mt Cook once. There was a girl there who just knew me as “Mark from Twizel” and one thing lead to another. We were getting it on, fucking away, and she was real into it and kept sighing, “ohhh Mark from Twizel! Mark from Twizel!” and it was fucking weird, but I just kept going because sex is sex, amiright?”

“It was just before my 21st birthday, and out of the blue I got a Facebook message from Matt, my high school crush. I hadn’t heard from him in years, but we soon reconnected.

Over the next two weeks we became really close again. Slowly the topics became more sexual. I lied and said that I had been in a previous relationship, where I’d lost my virginity. The truth was I was just as innocent as in high school. It became very clear that we wanted to have sex with each other; he even planned a special dinner for my birthday.

About three weeks before my birthday, I went on Tinder. I was determined to lose my virginity before Matt arrived, and try to gain some ‘skills’. I slept with a random. It wasn’t great.  The worse part was somehow losing the condom halfway through. I was furious! I thought he had taken it off. So I kicked him out. The next day I got the ECP and eventually forgot about it.

Three weeks later on my birthday, Matt arrived. All my flatmates were aware of the situation. They agreed to postpone my birthday celebration and promised not to be in the flat that evening. On the date at La Porchetta, everything was going magically. Matt briefly mentioned how he was meeting with my brother, Tom, the next day. I already knew this because Tom was going to stay on my couch. I’d told Tom where the spare key was, as I would be working when he arrived.

Eventually we went back to my flat and Matt and I started making out. I took him to my bedroom and we undressed each other. We were completely naked and he started going down on me. I heard the front door open, and just assumed one of my flatmates had forgotten something. Matt started poking me. But he stopped and gave me a strange look. I asked “is everything ok?” and he responded “are you on your period?” “No?” I said, and he pulled a strange piece of plastic out of my vagina – the condom I’d lost three weeks ago. Just then, Tom opened my bedroom door; he paused for a moment in shock and slammed the door. He had arrived a day early.”