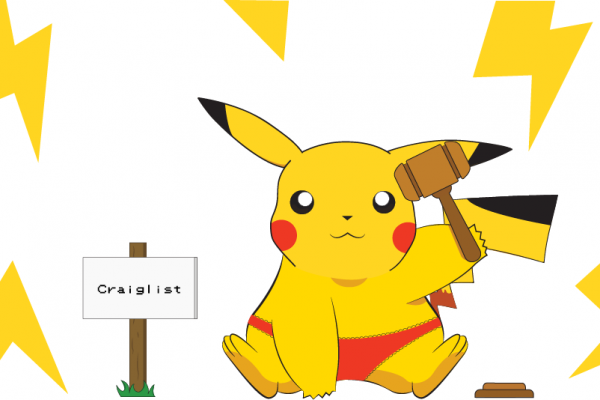 Matilda* is your typical Instagram art hoe. Never seen without her kanken, her embroidered dungarees and Vincent van Gogh socks, we’ve all seen variations of her around campus. But behind the lens of her yellow Polaroid camera lies a more twisted version of reality. Matilda sold her used underwear on Craiglist for money, “until I got enough to buy the new Pokémon game”. Critic delves into this phenomenon to explore the hidden world of underwear kinks, and how you too can shamelessly exploit men for money.

Female underwear is more than just underwear. Similar to Speight’s, the American Dream, and your Tinder hookup being down for anal, it represents a kind of ageless ideal that will forever illuminate humanity’s longing for greatness. Female underwear is about the first date decision of which overpriced Victoria’s Secret shit you’ll wear; always a malnourished, Oliver Twist version of what you thought you knew as underwear, begging for more material to cover your sweet cheeks. Thongs that ride up your ass more than Harlene Hayne. It’s about the granny underwear you wear to hide the muffin top you grew while living off two-minute noodles and Billy Mavs. We all can fondly smile about our black period panties, the holes in the elastic, the white discharge stains you got after the convocation ceremony with Jacinda Arden.

But how much does underwear cost? You can get a pair from Kmart for only $3 – the kind that sweetly smells of child labour with the stitching that only small, nimble fingers can sew. The next question to ask is, how much does used underwear cost? Think of a new car. The second you buy it and drive it off the lot it depreciates in value by around 11%, which is a pretty fucking big amount; all because your sweaty ass dared to sink into the pristine Italian leather seats. But if your sweaty ass touches the fabric of some Hello Kitty cotton briefs, get prepared for that sweet price increase. There’s no economic logic behind it; no one should want your gross day-old underwear. But they do, because humanity is full of beautiful little surprises like that. One might liken the vagina to the legendary King Midas: everything it touches turns to gold.

But where would one go to sell and buy used underwear? The street is out of the question – imagine running into your Aunt Mildred as you procure a stall at the Farmers Market (underwear juices are organic, right?) You’d be caught, quite literally, with your pants down. Thank fuck for the internet. More specifically, thank fuck for Craigslist, the quirky younger brother website for those of us too lazy to figure out how to use the dark web. For those unfamiliar with Craigslist, think of an unsanitary mix of TradeMe and Tinder and you’ve hit the bullseye. With graphics birthed from the gore of early 2000s chat room minimalism, Craigslist Dunedin is an unsettling place to say the least. Ever wondered what happened to those creeps you would talk to on Omegle with your friends at sleepovers? Look no further.

Matilda started selling underwear when she was 17 years old, having got the idea from Reddit. Posing as a group of girls (consisting of a 16 year old, a 17 year old and an 18 year old) Matilda undertook the challenge of navigating the murky waters of the internet. She guided us through the steps of selling used underwear – the dos and the don’ts of the panty trade.

First things first, you need to tailor your posts. This is a time to whip out those old NCEA creative writing skills. Remember to use keywords such as “moist,” “juicy” and “wet,” maybe even chuck in a cheeky emoji or two. “I used a lot of cute Japanese emoticons to give a very innocent, kawaii vibe,” Matilda says. She would attach pictures of her wearing the underwear – but not of her face for obvious privacy reasons. If you’re anything like most girls and fucking hate your body because of the media, feel free to jump around this step by using God’s gift to mankind: catfishing. Just don’t be obvious about it and use the first image result that comes up when you google “hot girl”.

Having got “dozens and dozens of messages” the next stage is to pick your targets. This means filtering out the guys who solely want to fuck you or probably kill you. The aim is to find a nice, normal underwear sniffer – is that too much to ask? Matilda recounts some of the men she talked to: “there’s lots of scary men who wanted to meet up, and luckily I was like “that’s a bad idea, I’m not doing that.” I got some weird requests. One was from a man who asked me to do a pussy pop – where he gets a lollipop, puts it inside my vagina, takes it out and eats it – which I didn’t do, because I’m not a huge fan of yeast infections. I had some men who would ask for more money if I shat in the underwear, or if I were on my period, which again I declined, but it was tempting.” Trust your gut and use your instincts. Don’t worry, you’re not going to die alone – you’ll find your perfect panty buyer, I promise.

Once you’ve cut down your selection to a lucky few, you need to prepare your unmentionables. You’ll want underwear which is cheap – thank fuck for Kmart – but still a bit lacy, a bit fun. Pro tip: be sure to cut the labels off to make it look more expensive. The longer you wear the underwear, the sweeter that stench will be. Plus, it’ll save you from having to do laundry (just think of the flatties and the power bill). Matilda found that “wearing underwear wasn’t entirely effective. So, I thought I’d spice things up a bit, and I made a nice concoction of PVA glue and the liquid from tuna cans, which gave it a nice look and smell. I’d just smear it on – really slap it on there – and you’re ready to go.” Arts and crafts has never been more fun.

So, you’ve got the goods, now you need to arrange how you’re going to deliver the packages. Matilda opted to support the struggling NZ Post, but also recalled an experience meeting a customer in person: “some of them wanted to meet up in real life which I wasn’t keen for. I only met up with one in real life because they gave me $200, but I did it in a mall. God, he even looked like your classic paedophile, with the little seedy moustache, the weird toothy smile and those glasses – you know the kind I’m talking about. He gave me extra money to wear my school uniform.” A $200 encounter aside, Matilda found she sold most of her underwear for roughly $70 apiece. That’s pretty top-notch considering the production costs total less than $10. “I would use an envelope to ship it to all the different people, which apparently you’re not meant to do. But I’d draw some cute love hearts on it, maybe put some stickers, really make it an authentic experience.”

Overall, selling your used underwear on Craigslist is a pretty decent way to make money and have some decent yarns for your future grandchildren. You may have to wade through a sea of unsolicited dick pics and dirty talk, but hey, isn’t that what being a woman is all about? At the end of the day, you’re walking home with some juicy tax-free dollars for your efforts. Matilda also hoped that her story can “inspire girls out there to exploit men. That’s actually the thing, I’m not just an innocent schoolgirl; I’m actually exploiting the patriarchy. I’m getting these creepy old men and I’m scamming them”. All in all, Matilda has no regrets about her schoolgirl experiences: “I’d definitely consider doing it again, but I wouldn’t necessarily recommend for other people to do it, especially for younger girls. The whole experience was funny but also weird, so weird. But I wanted my Pokémon game, and I had enough to get The Legend of Zelda: Majoras Mask afterwards too! I really loved playing it, I have a level 100 shiny Altaria [she insisted that we print that]. And one of my customers told me he had the best wank of his life to my tuna-glue. So everyone’s a winner.”

*Names have been changed to protect identity