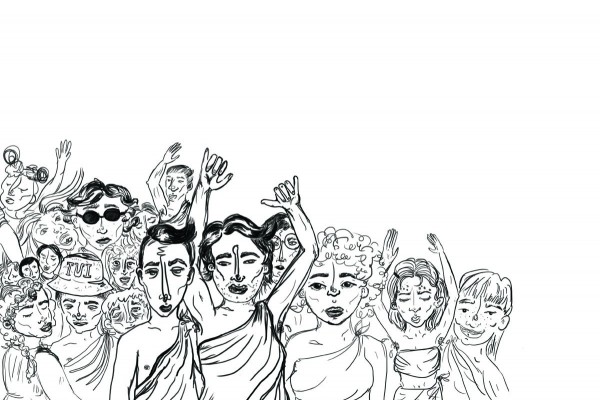 Ancient Greeks: We Disguised Ourselves as Freshers and Infiltrated the Toga Party.

‘Otago’ is one letter and a tiny word scramble away from ‘Toga’. Taking this as a prophetic sign, we sent two Critic writers who are way too old for this shit to coat their baggy eyes with foundation, rip up some sheets, and brave the iconic event that is the Toga Party.

After googling ‘what are young people into these days’ and finding pictures of Justin Timberlake (wtf why?), we decide to fake it till we make it.

Backstories were planned in advance, just in case any freshers got suspicious

Erin: Just been on a gap year in India where she ‘found herself’ and also got an edgy buzz cut. Studies psychology, because she's ‘like both arty and into behavioural analysis’. Goes to Cumby.

Jess: Overachieving Law student, unashamed of her contempt for English and Arts students. Goes to Unicol.

Erin arrives at Jess’s flat where everyone is snuggled up in bed, probably watching Midsomer Murders.

Jess’s friend helps her make her toga. It’s a two piece. She looks hot and young.

Erin cuts a series of holes in a sheet and comes out looking like a conservative Disney fairy. Nice.

Erin: I decide to wear my Doctor Martens because there will be a mosh pit and I’m pretty sure heaps of people purchased them like 2 years ago so surely they are still in fashion? I am also wearing two layers of wool and a pair of shorts under my toga.

Jess: The basic bitch toga is my vibe. At first I was going to make a poncho so I could wear polyprops underneath, but Erin convinced me it was risky – freshers don’t get cold; they might sense I was an outsider. So it came down to a two-piece toga, hair coated in glitter and white Converses I haven't worn in years.

We take photos outside Jess’s flat as per tradition. Jess pulls her door handle off its hinge in an effort to keep her flatmates away. They have eggs in their pockets; we run to the car screaming.

We roll up to Toga Party in Erin’s wholesome-looking car that your aunty probably drives. We park discreetly in the gym car park before joining the flock of freshers waiting in line. Then we realise that freshers are dumb as shit and walk past almost all of them to the front and slip back into the line unnoticed.

Jess: I ask a first year what hall they are in - Erin forgets her entire back story and tells them what she actually studied. (I am a very convincing liar. Erin is not.)

Erin: A second year approaches us and makes his move on Fresh-Jess. I ask him if he feels really old being at the Toga Party in second year. He says he’s 19 and we are probably like 18 so it’s not so weird.

Jess: We gush about how cool it is he’s in second year and he lives on George St and, like, that’s one of the main streets, right?!

Jess: Either that or they’ll pick up whatever sticky stuff is lying around - freshers are like toddlers - loud, sticky, attention seekers.

Erin: We try to hand our media passes discretely to the person taking the tickets. Media passes don’t count as tickets. We proceed on a wild goose chase to get into the stadium and the woman at the ticket counter calls the suits and slides open a gate for us. We are in.

Jess: Several pumped up lads cut the line in front of us to chant their hall chant. I stare at them with glassy eyes. I feel cold inside. That goddamn second year is waiting for us when we get in.

Jess: The second year I met earlier thrusts his phone in my face as we wait in the line for wine and I type my name, not wanting to be rude. He disappears, but we see him out there, hovering… waiting…

Jess: We realise that everyone around us was probably born in 2000/2001 and we shiver at the thought. Fucked up if true.

Erin: In line we meet a first year with a black flower crown and a pagan symbol on a chain. She’s really nice. If you’re reading this, young’n, please send your music to Radio One; it sounds like it’s going to be great.

Jess: We finally get our drinks. Both the beer and the wine are foul. I don’t believe they were even real beer and wine. No fresher would know the difference though.

Erin: A first year with a King’s tattoo on his inner wrist shows us how to really drag a ciggie. He proceeds to drag it seven times before exhaling. He doesn’t pass out. He then makes a joke about taking *illicit DRUGS*. This boy is bad.

We meet Wld Yung Thang (we didn’t want to name her - but we remember), and she tells us a sob story about how she’s lost her card, asks for a taste of Jess’s wine, and then skulls the whole thing. She also tells me she has mobile banking and I clutch my rank beer to my chest. She can’t take my one drink away from me.

Good Samaritan Wld Yung Thang (WYT) then spots some unfortunate fresher’s bank card and ID (which is fake) and we hand it in to lost property. We lose WYT and go to the bouncy castle. But it’s not a bouncy castle - you strap yourself to the end of it and run as fast as you can, and then it flings you backwards. Where was this five years ago?

I rate the bouncy castle 9 out of 9 shoeless freshers.

Jess: My boob pops out and I get very flustered, then disappointed that no one saw.

Erin: We get free ZM fanny packs - gotta be happy with that, even though their radio station has nothing on the great Radio One, patron saint of alternative music and saviour of students ears (91fm or r1.co.nz thankyouverymuch).

Jess: In the mosh there are many characters. There’s the guy with wrap-around speed-dealer sunnies, the guy wearing the goggles, many a Tui-hat combo, and pretty much every woman has her hair trapped under a sweaty armpit. Oh god it’s all so sweaty. I cannot deal.

Erin: Everyone presses themselves together for hours to see if humans can morph into one giant human. No one cares about the music; they just care about pushing their bodies really close together and being the person most towards the front. We are two old women disguised as first years infiltrating their space, trying to take as much eyewear as we can. I am not young enough to get away with that shit anymore and Jess looks like she is having a breakdown.

Jess: Erin was thriving in the mosh pit, but she saw my face and understood immediately. It was vital that I got out ASAP Rocky, lest I slap someone and tell them off for pushing, because pushing is rude.

Erin: I re-tie Jess’s shoe because I forgot about the fanny pack development and thought everything would fall out of her boob-bag if she did it herself. In doing so I caused a human avalanche #thoughtsandprayers.

Jess: I am dying. I need a bloody gin and tonic if I am to go on.

Erin: A dude yells to us that he loves fanny packs - he has his own unbranded one. This guy is smart, I reckon he will make it through HUBS this year. I tell another fellow teen I’m from Cumby and he says, “oh bro, I haven't seen you yet,” and asks what floor I’m on. I forget that Cumby has yearly themes and say second floor; he’s on fourth. Star-crossed lovers separated by two floors - it would never have worked m’dude. I’m sorry I lied - I actually live in Belleknowes.

People are smooching against the barrier.

Erin: I’m hungry and tired, and apparently so is everyone else because people start leaving.

Home for pizza and Bee Movie.

Erin: The next morning I wake up in a cold sweat having dreamt that I didn’t make any friends in my hall.

Jess: I get a message from my second year stalker. I need to send him a full letter of apology explaining how I have used him and why I don’t want this to change what we had. I’ll always be your fresher gal.