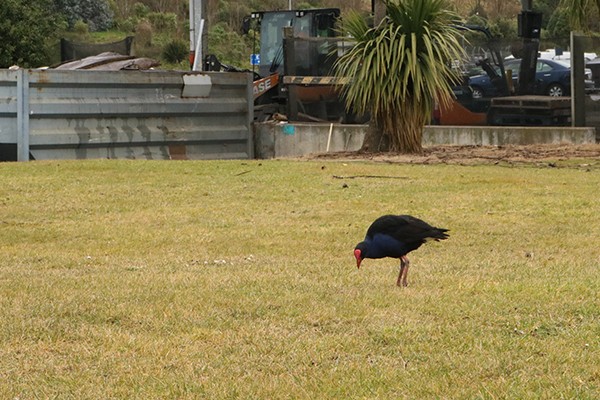 Dunedin’s Landfill and Its Inhabitants

It was a slightly rainy Wednesday afternoon, one of the ones that give you a general feeling of desolation and misery. My body was covered in goosebumps. We were going to one of New Zealand’s landfills, and a part of human lifestyle no one really likes to dwell on. Ironically, the dump is located in the suburbs of Green Island.

Recycling in New Zealand is handled by the municipal government, in this case, the Dunedin City Council (DCC), which employs about 15 people to operate the landfill. To enter, we had to pass a barrier and a guard working at the till.

Green Island is bordered by a small stream called Abbotts Creek that separates the landfill from the Kaikorai wetland, and terminates in the South Pacific. This wetland is home to the pūkeko (porphyrio melanotus), a species of Australasian swamphen, and other endemic, as well as introduced, bird species. We saw several pūkeko taking a stroll around the dump before we had even gotten out of the van.

Pete, a bird enthusiast, later explained to me that the purple swamphen had come to New Zealand twice in history. The first arrival is assumed to have occurred about two million years ago, and it then evolved into the North and South Island takahē (poryphyrio mantelli and porphyrio hochstetteri respectively). The second time it was brought to New Zealand by early Māori, and then became the pūkeko — at least that is what research and bone findings suggest.

Pūkeko have an elongated conical red bill between their eyes and a distinctive purple underbody. The takahē are similar but heavier and flightless. They have bluish-green feathers among their plumage, as well as a bigger beak that is adapted to pinch the strands of tussock bushes. The North Island takahē went extinct at the end of the 19th century, but the South Island takahē, once thought extinct, were rediscovered in 1948 thanks to Geoffrey Buckland Orbell. Orbell retired only eight kilometres north of the Green Island landfill, in the town of Mosgiel, and died in 2007 at the age of 98.

The Green Island landfill opened in 1981. Now, over 35 years later, it had developed the smell of rotten eggs that surrounded us upon arrival. We looked like a bunch of fluorescent oranges, dressed in neon-coloured safety vests. While the students set up their equipment, I had time to look at some of the treasures in the landfill’s own thrift shop. A few rare items near the entrance reminded me of my childhood: video and recorder cassettes, DVDs, books, and magazines and special offers on Harry Potter were things I especially enjoyed on such rainy afternoons like today. There was plenty of houseware, frames, furniture, and an impressive collection of rusty golf clubs. The mattresses even fitted my price and size range — I just wanted to throw one of those bastards in the back of my car and explore more of the South Island. I added that to my mental to-do list. It was time to head out to the drop-off pit, a hot spot for the pūkeko, where the monstrous machines crush freshly disposed garbage into a container.

A family of pūkeko carefully approached the container, tiptoeing smoothly over the concrete. Tony, our safety instructor, later told me that the ground below our feet was the first part of the landfill — domestic waste locked away for over thirty years and sealed with asphalt for all eternity. The surrounding hills looked artificial, and were indeed filled with garbage as well. Nevertheless, it was home to the purple swamphen, which seemed to be totally fine with all of what was happening.

“It’s an unusual day,” said Tony. “There are far more birds around on normal days.” We counted nine pūkeko that afternoon. “They are masters at picking bits out of the junk or the ground, and sometimes use plastics to build their nests,” he added.

Nobody knows for sure if Green Island’s buried trash affects its surrounding environment. Bacteria slowly break down the trash and produce methane gas. Rain water may seep through, mix with the decomposing garbage, and create a toxic soup called leachate. Landfill design aims to protect our ground water from such leachate with a complex system of layers that are made of high-density clay and plastics (i.e. polyethylene). Drain pumps at the bottom of the trash pile carry the leachate to external tanks, while a set of pipes above it collect the methane to prevent it from escaping into its surrounding soils (vapour intrusion) and/or the atmosphere. The idea of a landfill itself is not the worst, but the truth is, these systems are never 100% reliable.

I later found a paper called “Environment at a Glance 2015” by the Organisation for Economic Co-operation and Development (OECD), which, amongst other things, compares municipal waste disposal of their member states in terms of material recovery, incineration with or without energy recovery as well as landfill share. Germany marks the top of the table, New Zealand the bottom. Almost all of this country’s waste is buried below ground, a minimum is recycled, and the rest is shipped to Australia.

From 2003 to 2004, Jessica North and colleagues of the chemistry department at the University of Otago, investigated the carbon and nitrogen isotope ratios to identify Green Island’s leachate contamination. They concluded that “[…] isotopic ratios of C [carbon] and N [nitrogen] enabled the positive identification of leachate in the Kaikorai Estuary” The authors add that the study did not identify where the leachate originated and suggest that a “further study could assist in the positive identification of the leachate source.” To my knowledge, that study has not been done.

Dave Hanan, a Green Island landfill engineer, claimed in a statement that appeared in the Otago Daily Times on 18 March 2016 that “based on current monitoring results, it seems to be very unlikely that there’s any leachate leaking from the landfill into the environment”. Hanan worked for the Dunedin City Council for several years until 2003. He then switched to a company called Delta Utility Services based in Dunedin and continues to work on and advise the city’s landfill operations at Green Island. Hanan has a background in civil engineering and geography, but I wonder if he or his colleagues ever picked up on North’s methods and conclusions. I assume not because neither the DCC nor Delta Utility Services have provided more scientific evidence. His statement seems uncertain. In March 2017, the DCC terminated its cooperation with Delta and announced a new contract with Waste Management Limited.

Watching the birds stroll through our trash and litter is just one of the many situations we have created due to our massive production of waste. The students were pleased with the footage they caught, but not happy with the pictures they observed. Compared to the endangered takahē, pūkeko are abundant throughout the North and South Island and sometimes even considered pests. Leaking landfills can cause a chemical imbalance in surrounding ecosystems, just as North noted in her results. But according to David Hanan, there seems to be no (current) scientific evidence investigating Green Island’s leachate. While there may be no imminent danger for the pūkeko, there may be countless others affected in and around New Zealand’s waters. At this point, I just hope the landfill itself is the next species to go extinct.