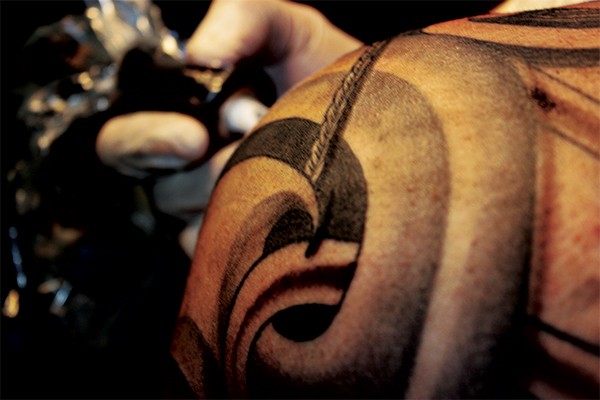 Ta moko is the traditional art of Māori tattooing, initially pertained only to the face, legs and buttocks. Contemporary ta moko has expanded its borders to incorporate one’s arms, chest and back - most likely due to the stigma that being tattooed has in modern society. However, in current New Zealand society, traditional ta moko is seeing a resurgence, with more people embracing their cultural practices and being proud to wear the moko (tattoo) on the traditional places.

Labour MP Nanaia Mahuta recently received her kauae (chin tattoo), emblematic of the way Māori are reclaiming the acceptability of traditional moko placements. Women wear the kauae, whereas men would have the face moko and the puhoro (legs and buttocks) done. After the Treaty of Waitangi, and the subsequent integration of Māori and Pākehā, ta moko prevalence declined. Māori were shamed for wearing moko by the crown, and there was a period of tohunga suppression - tattoo artists were not supposed to give moko anymore.

Ta moko has a spiritual origin. Legend has it that a living rangatira (wise chieftain), named Mataora, married a spirit from Te Pō (the underworld), named Niwareka. In anger, he hit Niwareka in the face, causing her to flee home to the underworld. In a fit of guilt and love, Mataora pursued her to Te Pō, where he came face to face with her father, Uetonga. Uetonga was a rangatira descended from the god Rūaumoko, and Uetonga was proficient in ta moko. Mataora’s people had only ever applied moko to the face temporarily, using clays and ochres, so he was curious about Uetonga’s permanent markings.

Mataora asked Uetonga for a moko on his face, and the severity of the accompanying pain was so intense that he started chanting to his lost love, Niwareka.

Niwareka appeared, but she did not recognise Mataora due to the swelling on his face from the freshly-given moko. However when she saw his cloak nearby, she knew it was him, and, pitying his suffering, she greeting him with kind emotion.

After he was healed, Mataora and Niwareka prepared to return to the world of the living. Mataora promised Uetonga he would never harm Niwareka again, because his moko was now permanent, and Uetonga gave Mataora the knowledge of ta moko as a gift to take back with him.

Archaeological evidence shows that tattooing came to the Māori from East Polynesian culture. The tattoo would be done with serrated and straight edged bone uhi (chisels), often forged from albatross bone. A bone rake-like tool would break the skin, and then the dye would be tapped into the wound with a flat blade, giving the resulting moko a chiselled impression. The dye would be created from mixing kauri gum with the soot of burning white pine or kahikatea (a coniferous tree endemic to New Zealand).

Dyes were also made using burnt vegetable caterpillars or gums, and these pigments would be kept in buried oko (small containers), which were prized by families and passed down through generations. The black dye produced from the burnt wood was only used in facial moko, whereas the burnt gum or caterpillar pigments would be used on outlines and less sacred moko.

Music would be played during the tattooing process to soothe the recipient (a growing number of studies today suggest that music is an effective tool in alleviating pain), and chanting poems would be offered. The cuts sometimes sliced so deeply that they penetrated through the cheek - pain and blood loss were prolific, but pride was obtained in neither flinching nor crying out.

The moko signified rank, prestige and social status, and was highly respected and steeped in ritual.

When the face was being tattooed, solid food and sexual activity was prohibited, which meant that until the moko was healed, food was liquified and funnelled into one’s mouth, so that the skin would not get infected. They were not permitted to speak to anybody other than the tohunga ta moko, or the other people receiving their own moko at the same time. During the long and arduous healing process, they would cover the swollen wounds with karaka tree leaves to expedite the healing process.

All high-ranking Māori, both women and men, were tattooed, commencing with coming of age. Moko marked important lessons learned and important milestones, and the head was considered the most sacred place on the body. The main designs for ta moko are two-fold. The usual process would be a blackening of the lines (or outline) only, while the secondary style would be the inverse, with only the background being filled in, with the linework remaining unfilled. This was commonly used in the puhoro (buttocks and thighs) markings.

The face moko took a long time to complete, and the tohunga ta moko would take great care to familiarise himself with the recipient’s facial bone structure in order to create the most appropriate tattoo. The tohunga ta moko was almost always a man, although there were some women who learned the art in more recent times. Tohunga ta moko were considered tapu (sacred), and were highly respected within the iwi.

Women had their kauae done (chin and lips), instead of the full face that men received. Along with their chin designs, their lips were lined in a dark blue, and their nostrils received small delicate cuts.

Wearing a moko was an honour reserved only for those of high status or rank. Slaves were not permitted to have a face moko, and a person who was able to afford a moko, yet did not undergo the process, was considered to be of lower social status for this decision.

Not only was the facial moko a sign of status, it was also a form of personal identity. It showed the wearer’s ancestry, their family stories, their personal stories and accomplishments, as well as their marital status. It was important that you could recognise somebody’s status and identity by their facial markings, and it was considered downright insulting to the wearer if you could not.

The different areas of the face housed different themes of the moko, with the left side of the face being the domain of the father’s ancestry, and the right side belonging to the mother’s ancestry. The centre of the forehead, the ngakaipikirau, would depict the person’s rank in the tribe, and underneath the eyebrows, the ngunga, would denote his position. Around the temples, the una, his marital status and number of marriages would be marked, while his taiohu (cheeks) would show his occupation. The general eye and nose region was called the uirere, and displayed his hapu (sub-tribe) rank. The raurau, underneath the nose, contained the wearer’s signature, which would be memorised by chiefs and used when purchasing property, signing titles and authorising orders. The wairua (chin) and taitoto (jaw) were the areas reserved for signifying one’s mana and birth status.

Captain Cook wrote in 1769 that "the marks in general are spirals drawn with great nicety and even elegance. One side corresponds with the other. The marks on the body resemble foliage in old chased ornaments, convolutions of filigree work, but in these they have such a luxury of forms that of a hundred which at first appeared exactly the same no two were formed alike on close examination." His initial observation was astute indeed - no two moko are alike, they are custom designed for the wearer, according to the wearer’s family history, their personal circumstances and achievements, and the artist’s own skill.

Early European settlers were fascinated by the Māori moko, and a few Europeans were eventually assimilated into Māori society and given their own moko. Described as ‘Pākehā Māori’, these men were often visiting traders, sealers, whalers and escaped convicts from Australia. While some were considered slaves by Māori, others, such as Barnet Burns and John Rutherford, married into Māori communities and were honoured with the moko.

The European fascination with moko grew such that they began to trade muskets for the tattooed heads that were trophies of Māori wars. Once the Māori learned the extent of the Europeans’ desire for these tattooed heads, they began attacking neighbouring tribes solely to obtain tattooed heads for trade - the traders would then sell the heads to collectors and museums back home.

This trade grew so lucrative for the Māori that they started beheading commoners and slaves in order to tattoo their heads post mortem, resulting in the sale of shoddily-tattooed and incomplete moko. Currently there are thirty of these heads on display at the Natural History Museum of New York, courtesy of Major General Horatio Robley, who was a major collector of the tattooed heads back then.

Although systematic oppression of Māori culture by the Europeans was rife in the 19th and 20th centuries, a recent renaissance of Māori culture, and a nationwide attempt to rediscover this heritage has been underway for the past couple of decades. Happily, this has brought about a sharp revival of ta moko practices and a renewed interest among people of Māori heritage in honouring their culture by getting tattooed.