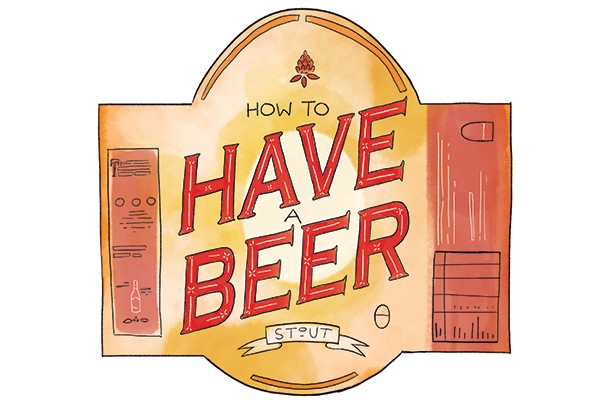 How To Have A Beer: An Interview with Michael Donaldson

Michael Donaldson is New Zealand’s pre-eminent beer critic, author of two books on New Zealand craft beer, columnist for Fairfax Media, and the chair of judges for the New World Beer & Cider Awards. We sat down with him to discuss how to have a beer, where he got his passion, and why the term ‘craft beer’ is meaningless.

How did you start your journey from beer drinker to beer lover?
That’s really interesting. It happens in steps, everyone has that epiphany beer, the one that really tips them over the edge that they can’t come back from, and I think there are people that have that in a more dramatic way, and they just get really into it and they become quite like religious converts. For me, it happened gradually. There was bits and things, but the one that really stands out was an Emerson’s Pilsner in the Martinborough hotel on Christmas Eve 2007. We’re in the middle of wine country and they had fresh Emerson’s pilsner on tap, and it was just like ‘man, this is amazing’. It was just the occasion, the beer, Christmas Eve with my wife and we were just having a really good time. It just made me think that “wow, I’ve really got to go down further and discover more about this”.

But even then at that point I was dabbling in homebrew; I’d had an Epic Pale Ale which I kind of liked, I really loved Little Creatures when I was in Australia. I had a number of little steps, which took me there and I was interested in it. The homebrewing was what I really wanted to get into, but that just really tipped me over the edge and that was full immersion at that point.

I just got lucky in some ways. I might have just been a drinker and a homebrewer, but, because I was a journalist – I was at the Sunday Star Times at the time and we got a new editor who was quite a relaxed character, and I just told him I reckoned he should get rid of the wine column that we had and replace it with a beer column, written by me, and he just said “sounds like a great idea”. So all of a sudden there I was, and within weeks I had to conjure up a beer column and I didn’t really know where to start, so I went with what I knew, which was Epic Pale Ale, and wrote about it being the hoppiest beer in the kingdom – as it was at that point. And then I continued to stumble my way through it from there. I think my first few columns were a bit naïve; I really didn’t know anything, but you also don’t know what you don’t know.

And since then not only your presence but the whole industry has really taken off
Yeah absolutely, it’s not a full time career, but there’s enough of it that keeps me in it in a respectable way. I think I was just lucky that I was bold enough to sort of say “hey, can I have a column” and it was in a national newspaper, and out of that came a book and out of that came judging and more books and more writing. I think I’ve grown up with the industry, we’ve done it together, I’ve ridden on the coat-tails of it.

Going on that, for someone that is looking to start their own beer journey, maybe you’ve got someone that is a religious Speight’s drinker, never really tried anything craft, how would you recommend they start their journey?
I think if you’re immersed in that culture, say Speight’s – I was a student here in the early ‘80s and I drank Speight’s and nothing else because it was part of just being here. The fact that it wasn’t a national brand, it was local and that was the really good thing about it. You couldn’t get it in Auckland or Wellington, it was a Dunedin thing, and there was a bonding around it. I think that applies to craft beer now. I think ‘craft’ is a loose term, but it’s all about local and identity and I think people should drink something that’s around them and be as passionate about it as we were about Speight’s back then (because we didn’t know any better).

So whether that’s Emerson’s, Cueni, Steamer Basin or Scott’s in Oamaru, there’s a lot coming out of Wanaka now, I just think you’ve got to explore what’s around you and that whole local scene, and just discover what’s in your environment and what people in your city are doing. I think that’s a really good way to get into it. You don’t have to try and understand the whole Garage Project range or try get your hands on rare releases from small breweries.

The other thing is to go to festivals, I think the Dunedin Craft Beer & Food Festival they have here is really good. That way you don’t have to make a commitment to anything, you just go in with your eyes wide open and try it. But it’s kind of not for everyone either, you can’t force people into drinking what they don’t like. Some people do identify craft as hoppy, and they find it overwhelming, too bitter, too aggressive. So in that regard maybe you just need to take smaller steps. You don’t have to think that craft means going for super hoppy, it can mean drinking a well-made lager instead, and finding out the difference between a locally produced lager, like an Emerson’s Pilsner, and maybe choose that over a Steinlager or Heneiken or something. People have to want to try it, and once you’ve tried it you have to be pretty stubborn or have no palate to not want to go back. Especially if you are a hardened Speight’s drinker; it’s so far apart from something like an Emerson’s BirdDog that if you try it and like it there’s no going back.

Are there any beginner craft beers that you would recommend for someone just overwhelmed by the choice?
That’s a really good question. Definitely the Emerson’s range, because they tend to be quite classical, well made, restrained. There’s nothing ever spiky about them that sticks out and doesn’t work. But I think if you want to try hoppy beers, you can’t go wrong with Epic or Liberty. Panhead Supercharger obviously. Tuatara make a really good range of approachable beers, even though they now are under the DB umbrella, and some people decided that with that loss of independence they were no longer going to drink that, but they still make really approachable beers. But ParrotDog, that’s probably my top pick. Their Blonde Ale is good, their Pilsner is amazing. They made their name around Bitter Bitch, and that’s quite an aggressive name and it sounds like an aggressive beer, but it’s not really, and actually they are quite classic, and again restrained, in their styles; really well made, approachable beers. I reckon they’re a really good starting point.

With Garage Project you wouldn’t know where to start. People in Wellington nowadays walk into a pub and say “Do you have Garage Project?” and bartenders will go “yeah… which one of the 284 Garage Project beers do you want?”. You could get anything from the simplicity of their ‘Beer’ beer, to a Wabi Sabi Sour or a Mutiny on the Bounty, an 11% Imperial Stout made with plantain and coconut. So, to be able to say one brand or brewery is a safer bet than another is hard, but ParrotDog are really solid.

You talked about how Tuatara have gone under the umbrella of DB. What is your view on that? Do you think it’s more important for people to enjoy craft beer for the quality or for the independence and supporting small business?
I actually think we’ve moved beyond ‘craft’. In the industry at the moment, putting ‘craft’ in front of something is a bit like putting ‘gourmet’ in front of your café food or ‘barista-made coffee’. It doesn’t mean anything anymore. If someone says they’re a ‘craft beer bar’, what does that mean? It’s a meaningless phrase that’s just being bandied around. My thing is to get people to come back to local and find out what works locally. I think that’s important. Big doesn’t mean bad and small doesn’t mean good, and the same with independent vs. corporate.

I would never preach at people what to buy, it’s what you like, and value to you might be getting a six-pack for $10. But for other people, value is a six-pack of Panhead at $21. So it’s just that cost/benefit analysis that you want to do.

I don’t get hung up on it. If you love Tuatara, I would never say ‘stop’, but if they start making it in the DB factory in Auckland, then it won’t taste the same and people will stop buying it. So as a brewery they’ve got no interest in corrupting it. I think those big breweries care enough at the moment about those craft brands to not interfere with them. Whether that’s the same in 10 years I don’t know. Now I kind of think it’s safe, they’re approachable.

Emerson’s is still pretty independent from Lion HQ, they let them run their own race, they fund them for what they need, and as a result the beers are better than they were coming out of the old brewery, so that’s been a good thing for them. Ownership can be a good and a bad thing. It’s a tough one, so I just say if you care, do your research, find out who they are and ask questions.

Of the mainstream, non-craft varieties, is there any particular favourite of yours?
I’ve always had a bit of a soft spot for Speight’s Old Dark; it’s a really reliable beer. In the Mac’s range, the Sassy Red is a really good beer. Steinlager is an underrated beer, I think people are very dismissive of it, but it’s really well made and it’s used that iconic Green Bullet hop. I think the quite aggressive bitterness of Steinlager for a long time made it unapproachable for people, but now when you have it, and you’ve had more hoppy beers, you can actually appreciate its qualities.

I just encourage people to explore and find what works for them and find one beer you love, then you can start to learn more.

Tags:   interview how to have a beer features michael donaldson