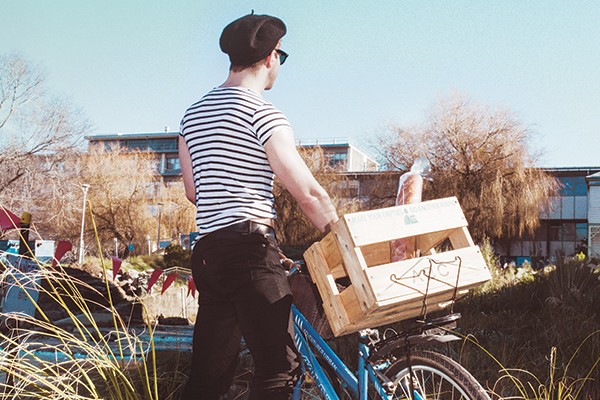 Travel Trips From A Jerk

It all starts pretty innocently, over a few loose ones at Starters Bar with a couple of your mates from high school. You happily slur sweet nothings to each other, pointing your beer bottles at each other for emphasis, sealing the bromance with a few rogue splashes on each other’s Leavers ‘16 hoodies. It’s week four of your second semester at uni and you have all pretty much stopped going to lectures at this point, because you’ve finally worked out that you don’t have to actually attend classes to pass.

You’re feeling pretty worldly tonight and a throwaway wistful remark about visiting Amsterdam escapes your lips in between Sambuca shots.

“BRO!” You feel a strong arm encircling your neck. “That’s where I’M planning on going bro!” His stubble grazes your neck as he leans in closer, blasting your eardrum enthusiastically. “LET’S DO OUR FUCKIN O.E. TOGETHER MAAAAAAATE!!”

More beers are drunk. Shots are had. Road cones are collected. Plans are made. Before you know it, your BCom has been deferred and you and your BOOOOOOYSSSSS are all booked to travel the world (and by world, we are of course referring to 7 European countries in 12 days, motherfucker!).

Scoring cheap flights is something of a gamble, depending on when you are planning to travel – it should go without saying that you want to avoid the school holidays at all times, because: a. kids are fucking annoying to be around (this is at all times, but even more so on the holiday that you have forked out actual cash for) and b. flight prices go through the roof. The cheapest days of the week to travel are Tuesdays and Wednesdays, so be flexible with your dates in order to score cheaper flights. If you’re not flying at a notoriously busy time, the best time to book is around 2-3 months prior to leaving, as this is when airlines start to manage fares actively and things go on sale. If you’re looking at flights, clear your cache and cookies or browse using separate incognito windows, because when you are looking at flights airlines use your cookies to track the earlier fares and searches, and they keep increasing the prices each time you search to try and trick you into booking at a higher cost. I’m not kidding about this. Those jerks.

Your pre-travel plans and precautions are going to be the Blu-Tack that holds your Gatorade bottle bong setup together. It’s possible to get by without it, but preferable not to have to. So firstly, get travel insurance (don’t fret child; not the expensive kind - I’m just talking about websites like 1cover.co.nz, which is fine if you know how to read terms and conditions). This should not even be negotiable – and it should cover cancellations and medical, because those are the two most common things that are going to go wrong. Trust me on this, you definitely want to have travel insurance when you find yourself stuck in an Indonesian hospital because you fucked your leg up riding around on the back of a scooter with a drunk dude named Wayan who may or may not have been taking you to a seedy karaoke bar.

Consider what kind of traveller you are going to be and what kind of experiences you want to have, and budget your cash accordingly. There are still pretentious dicks out there under the age of 40 who insist all travel plans be first class and five star, lest they actually find themselves in contact with the culture they are visiting. I trust that you, as a chilled Otago student who wants to discover the world on your own terms, are not one of these people. When it comes to hotel rooms, price is almost infinite in either direction – but most of the time, there’s not a hell of a lot of difference between the bulk of places. When you’re travelling with your mates, the only things you should really be worried about when it comes to your hotel rooms are the following four things;

That’s it. That’s all anyone should ever give a shit about when it comes to hotel rooms on holiday, because you don’t go on holiday to dick around in a bland hotel room. Fancy hotels are for having sex in to spice up your marriage when you are old and boring, or for when you have to go somewhere “on business”.

So, now that you have not wasted a bunch of money on an overpriced hotel, the next thing you need to do is consider the people you’re travelling with. Do you need to set out some ground rules? If you are sharing hotel rooms, do you need to have a chat with the resident nympho in your crew? Find out if everyone is on board with the same style of vacation - it’s pretty lame to find out too late that all you want to do is party, while your shit mate just wants to eat, pray and love their way to a quietly mediocre early retirement.

Are you travelling heavy or light? The amount of womenfolk I have met who take hair straighteners and high heels to places like Thailand is staggering. You’re in thirty-five degrees with 80 percent humidity, do you really think straightening your hair is going to do anything for very long? Tie that shit up in a ponytail and use the space in your suitcase for something more useful, like drugs (but also, don’t take drugs across any international borders).

There’s nothing more satisfying than sailing past all those people at the luggage carousel when you didn’t bring checked luggage. The maximum size for a carry-on bag is actually pretty generous, and you can easily fit a week’s worth of clothes in there. Better yet, if you’re going somewhere notoriously cheap, you could arrive with an almost empty bag and just buy shit to wear when you are there, which you can either turf to make room for tacky overpriced souvenirs and curios, or bring home with you. Also, a full makeup case the size of an accordion is totally unnecessary, and you can just buy cheap toiletries when you get to your destination.

Bring all your necessary chargers and a universal power adapter – too many people forget this stuff and have to waste precious time and energy trying to suss them out in a foreign country. Make sure you are aware of what is happening with your phone while you’re away – there’s nothing worse than arriving home to a huge-ass phone bill from Vodafone because you had data roaming switched on. But also, consider turning your technology off unless you’re waiting in airports - that’s what holidays are for!

Once you get to where you are going, beat jet-lag by staying awake until it’s night-time there, then get a full nine hours of sleep that first night. You’ll likely wake up a little tired the next day, but you’ll still be able to function well enough, and after the second night of sleep you should be fully adjusted to their time. Drinking a good half a dozen standards before lunchtime on your first day works pretty well in my experience, and gives you a rosy, devil-may-care glow. Walking around on that first tipsy afternoon in a new place is my absolute favourite feeling – everything is new and different, and your senses are heightened due to partial exhaustion, yet calmed by the booze. It’s just sublime.

Smile. Smile at everyone you meet and be gracious as fuck. Don’t whinge about lame shit like there not being a 24/7 dry-cleaning service at your hotel, that shit is all so meaningless in the grand scheme of things. Us New Zealanders have managed to give ourselves a pretty incredible reputation across the world as being really cheerful, pleasant travellers – as opposed to our neighbours across the ditch (having a NZ passport in Bali is a lifesaver, because otherwise they’ll think you’re just another Australian there to trash their country and be a dickhead).

Try everything. If some dude with a horse and cart comes up to you in Gili Trawangan offering you and your mates some magic mushrooms, you take that shit. Nobody wants to tell their grandchildren about the time they could have had mushrooms and ridden around an island on a horse and cart with their friends, but didn’t, because they were too boring to give something different a go. But also do be sensible and know the drug laws of the country you’re in (don’t touch ANY drugs in Indonesia or Thailand, unless it’s mushrooms).

Eat the way the locals do – it’s always so good. Half the point of travelling is to eat food that isn’t boring western shit, so if you’re out there in a foreign country trying to track down a McDonald’s, you’re going to be sorely disappointed – not just by the McDonald's, but also probably by your later life choices, you unimaginative fuck.

Off you go then.