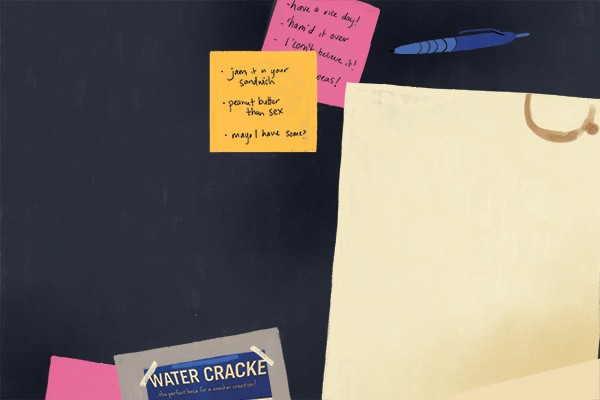 Cheap Thrills: We Tracked Down the Heroes Behind New Zealand’s Greatest Grocery Brand

Every week I piss away ten hours of my life working at a supermarket, in order to afford enough alcohol to numb the pain of working at a supermarket. It’s a vicious cycle. And every bovine tête-à-tête with a customer leaves me that much closer to throwing in the towel, and having a crack at living on $176.86 a week. But there is one candescent light in the darkness of minimum wage, and that is the slogans on Value (née Budget) products. If you haven’t noticed these slogans, you’re missing out on uniquely Aotearoan avant-garde comedy, right up there with Air New Zealand safety videos and the comments section on Stuff. Gems like “Berry good indeed” (on Value raspberry jam) or “don’t run out – cat-astrophe!” (on Value cat biscuits) make listening to my 17-year-old colleagues’ yarns about NCEA Level 2 and sneaking into Vault 21 bearable. Recently I got to thinking about the person behind the slogans. A few emails to Foodstuff’s External Relations Manager later, and I was granted an interview with Value’s chief slogan-savant, Steve Bayliss. I asked the following questions. To begin, we wanted to say that it is exceptionally rare to receive such an erudite request for information. In one fell swoop you had us reaching for Roget’s and madly Googling esoteric art history theorem. It has taken a little longer to come back to you, as we wanted to do your request some justice.

To be utterly honest it hadn’t occurred to us that the witticisms on our Value labels perhaps constituted ‘art’, rather we, like you, simply look for ways to brighten up our shoppers’ days and our own. You have unwittingly unleashed a burgeoning sense of pride among the happy band of marketing people in our Own Brands division who likely used to think a haphazard doodle in their notebook was their only artistic endeavour.

The slogans you see on Value products are created by a handful of clever folk in the Foodstuffs support centre in Auckland. It’s one of their favourite parts of the job. They thrive on throwing ideas around and coming up with something fun or quirky for each product. As a result of your enquiry we’re considering implementing “Foremost Artistic Genius of the 21st Century” as a Key Performance Indicator in upcoming reviews for the team; though, at this juncture, it’s unclear how we would acknowledge that award in a meaningful and artistic fashion.

History does show that many artists have professed to be anti-business, but the crew in our Value marketing team proudly own the badge of ‘capitalist-creative’. In our view it is no crime to earn a penny. In doing so we generate an income for the likes of your good self among nearly 30,000 others who work in New World, PAK’nSAVE and Four Square stores, not to mention the sea of dairies and convenience stores up and down Godzone who also purchase and sell our Value products. We’d argue that, like the ‘Damien Hirsts’ of this world, art is a valid pursuit and a worthwhile way to make a living – and that art and revenue are not mutually exclusive, provided both elements reflect the zeitgeist and are relevant to a host of audiences.

To slogan or not to slogan? We’ve opted instead for an alternate quip from Wittgenstein, “The limits of my language mean the limits of my world,” preferring to harness the limitless capacity of our team to chug down endless coffees and come up with as many slogans as they can bear. The odd un-fettered product name is more likely due to a momentary shortage of dark-roasted Arabica in the office kitchen than a deliberate inability to articulate the essence. We’ve noted your feedback and will try harder.

You do highlight some subtle differences between the slogans incorporated on-pack; ergo ‘wit’, ‘philosophical speculation’, ‘solipsism’ or ‘categorical imperatives’. I refer you to my note above regarding the zeitgeist. It’s a simple case of tapping into what is current and then harnessing a passion for ‘punning’, an obsession with onomatopoeia, and possibly a healthy consumption of Value Chocolate Thins. Which leads me to the process: As such, for us, “Life’s a picnic”. If work weren’t even a little bit fun it wouldn’t be worth doing.

We’re delighted to give you and our valued Value shoppers the occasional delightful moment. If our efforts constitute art in some small way, it’s simply “the icing on the cake,” which just happens to be a Value Fondant currently in the planning stages.

Nat, thank you for making us think and laugh.
Sincerely,

*Brainstorming is now considered an insulting term and has been superseded