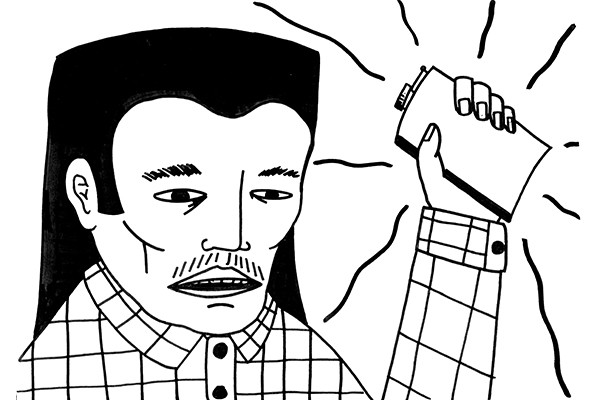 A 600-leg creature hulked with its head in Refuel, trying to get warm. Its many protuberances waved drunkenly. We had planned to arrive early to Pint Night, but, after I found my shoes and my flatmate Selena found her ID, it was 9:15pm. One obligatory, but slightly panicked, pre-pint party to Lil Wayne later and we were on our way. As we approached, we saw that a Big Mistake had been made. The Line would be at least an hour’s wait. We knew that by the time we got to the front we would be sober enough to teach a St Margs tutorial.

“Do ya think maybe we should just head home?” Selena asked, feebly, as the Line groaned and shivered its tail behind her.

“Maybe just wait ten or fifteen minutes and see how far we get?” I said, uncertain with my own level of conviction.

The Line eyed us beadily, with arms folded, as though our indecision reflected badly on them, as though they would happily trudge a ten-mile line through the desert if the oasis of Pint Night waited for them. A less indecisive hoard hustled in behind us, thirsty for the drinks. We were consumed by the end of the Line and resigned to our fate. A farmer from the Deep South would not have felt out of place, considering the levels of plaid shirts, dad denim, and overalls. The Line had essentially devoured Mac Demarco and stolen his wardrobe. Considering that the sun was a rarity during the day, let alone in the freezing night, the hat ratio was unnaturally high. There were also high levels of Thrasher shirts.

We entered the line behind a man with luscious hair, who was loudly announcing to adoring friends that he had already received three 'Wats up?’ texts from girls, even though it was only 9:30. Though his hair was shampoo ad worthy from the back, upon rotation it was apparent he sported a raging mullet. Selena deemed this “a look”, I was not so confident. He pulled a So-Go from his pockets, opened it with his mouth and smashed the entire can. He then proceeded to open his belt and fly and pull out a large flask.

"You want some?” he asked, flapping the flask in our direction.

Selena got disturbingly close to my ear - “He’s everything I’ve ever dreamed of,” she hissed. I was unclear on her level of sarcasm.

We were now twenty minutes into the line. I was starting to feel about as sober as a police officer shutting down a ski club party. At this point it dawned on me that my toes were cold, that Refuel never played good music anyway, and that I could have stayed at home and had a perfectly nice evening not getting elbowed in the face. I wasn’t raised a quitter though, and we were almost halfway down the line. Against my better judgement, I took several hearty swigs from the crotch flask and so did Selena. The alcohol was sunk and so was the cost. There was no backing down now. Deep in the belly of the line, it was time to get serious. We began to police the line with enthusiasm. Those who began to sidle up and slip into the line with friends were given an enthusiastic verbal beat down. We told them they looked like Justin Bieber and asked if their mothers knew they had no manners. We ripped off their caps and tossed them enthusiastically like frisbees, scattering the enemy. We hardened the Line’s ranks, batting away intruders with absolute seriousness.

Selena was enmeshed, deep in the mullet dude’s philosophy.

“I mean, there’s a certain point at which you realise you’re just an animal, you know. That’s what’s so wonderful about being young. You can drink and fart and fuck, and no-one really judges you. Or no-one that important anyway.”

It was a blessing to perceive that, at the 40-minute mark, we were drawing in on the barrier, the last and most vicious part of the journey. I even began to hear music over the wails and squawks of the Line’s later stages, which were noticeably devolving. As the creature grew closer to its prize, it began to undulate even more enthusiastically. The music was beginning to charm me. The pushing around me became just inspiration for my dance moves. I was beginning to feel the power of the mullet’s mystery crotch liquid move through me.

Selena was holding her ID between her nose and upper lip, giving her a moustache with an image of herself on it.

The mullet dude was talking earnestly to her, as she just nodded along.

“Adults are bull-shit man. The cars, the job with the big desk, the house and the mortgage. The pretending to have it together all the time. I don’t think I want it, but eventually everybody’s going to start pretending they do. Then I think, I think I will too. It’s bullshit man, absolute ape-shit.”

“I don’t know dude, I’m just enjoying my life right now, because who knows what could happen tomorrow, you know?”

“Totally, totally.” Selena said enthusiastically, eyes glistening. We had reached the head of the line.

“Do you want to just bounce?” said the mullet succinctly to Selena.

“Nah, dude.” said Selena, as she handed over her ID and we were swallowed up by the mouth of Refuel. We skipped down the into the dragon's den, in search of some liquid gold.