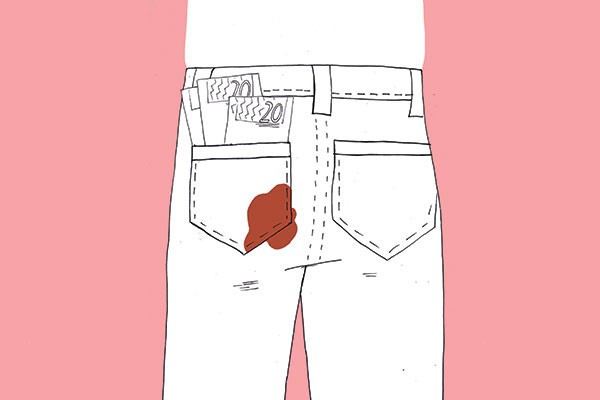 The Costly Issue of Having a Uterus

To begin this piece, I will start by saying that NOT ALL PEOPLE WHO MENSTRUATE ARE WOMEN. Some of you, will be scratching your head thinking what the fuck do you mean? Girls get periods?!! That mindset, however, is very narrow-minded. Still confused? Read on.

If anyone didn’t do year 10 health, I’ll quickly catch you up. Menstruation, or what most of us call a ‘period’ is a natural process of discharging blood and other material from the lining of the uterus at intervals of about one lunar month, beginning from puberty until menopause (except during pregnancy). Alright, so we know what menstruation is now, if we didn’t already. But what they didn’t tell you in year 10 is that not only cisgender women experience menstruation, but transgender men and some non-binary people also menstruate. Yes, read that again. If you have a uterus, despite what ‘gender’ you identify with, you will menstruate, i.e. people of all sorts of identifications, not just ‘women’ get periods. Ah, you’ve thought about it now, and it’s beginning to make sense to you.

Now this one’s for you boys. Think about your public bathrooms - whether they are at uni, at work, or out in town. Urinal for peeing in - check. Toilet for peeing or taking a shit in - check. Sink for washing hands - check. Bin for the disposing of sanitary items - NOPE. It’s 2017 yet even at the level of basic ablutions we are not inclusive of trans men or non-binary people, who - in case you forgot - menstruate as well. It is a basic human right for them to be able to dispose of their sanitary items just as it is for those who identify as ‘women’.

Alright, there we go, there’s a few numbers to think about. So on average, those who have a uterus will menstruate for 38 years. They will use over 10,000 tampons or pads and discharge about 14 litres of blood during their lifetime. A packet of tampons can cost anywhere between $4-10 (if you don’t believe me about a packet of tampons costing $10, then try buying a packet at the airport, then get back to me), meaning that those who menstruate will spend anywhere between $1,920 and $4,800 in their lifetime. I don’t know about you, but I think that’s pretty shit. Maybe that amount is not an issue for some people; maybe they can comfortably fit that cost into their weekly budget. However, for many people the cost of sanitary items can be a struggle.

Take the average student - your Studylink money comes through every week, it just covers your rent, power and internet, and what’s left is spent on your food shop. Which is fine right, you make do, until that time of the month. A packet of tampons or pads in some cases literally takes out a quarter of your food budget. Okay, so take a homeless person - you don’t have any money for a place to live, barely any for food, and sanitary items? Out of the question. It’s about time sanitary items became more affordable and more accessible for those who menstruate. Don’t get me wrong; there are some great intakes around the country that provide sanitary items to the homeless (which is awesome btw), but it’s time to do more for what is a basic human right.

I got excited recently as I saw Pharmac was reviewing whether or not they should fund sanitary items. This is it! Surely! Nope. They rejected the application and sanitary items are still just as hard to access and afford. Pharmac issued a statement simply saying “Sanitary products are not medicines or medical devices”. As Pharmac considers menstruation a “normal bodily function,” they can only fund medicines or medical devices or products which provide "therapeutic benefits relating to a health need”. I don’t know about you, but to me it’s pretty therapeutic to have products which stop me from dripping blood everywhere, but okay. We’ve been told and taught that menstruation is a natural bodily function that we have to take care of - and ‘by take care of’ they mean you have to buy the expensive items that are put on the market because, at the end of the day, it’s just a business making a profit. Of course, nothing is ever free. Of course there are always costs involved in production. But $10 a packet? Fuck off, someone out there is making millions of dollars by manipulating those who experience menstruation. Sanitary products are a necessity and that’s not fair at all.

But do you know what else are natural bodily functions? Ejaculation and impregnation. That’s right. Yet the government showers the fucking country with free Durex condoms - um excuse me, I thought you didn’t fund products that were not a medicine or medical device? FUCK YOU, a big FUCK YOU. Those with penises can choose to attempt to impregnate or not, yet you fund a product so they almost don’t even have to worry about making the choice. Yet those with a uterus have no choice in menstruation, it happens, and you will not fund or even subsidise products necessary with assisting this process and making those with a uterus more comfortable during menstruation. Unreal. Something tells me there’s a lot of men in suits and ties making these decisions.

So, here I am, reaching out to you University of Otago. You accommodate around 20,000 students, with the majority in the same financial position. Most of us admittedly struggle with the cost of our fees, cost of materials, rent, food, and so on. If the whole country cannot change, let’s be the first. A packet of tampons from the Campus Shop currently costs $7.20. I have two suggestions.

For now, that is all I have to say. I hope that I have opened the mind of at least one reader to an issue that for too long has been ignored. Sanitary items are a necessity, and it’s time that they are considered one, as a basic human right.

- On behalf of people everywhere with Uteruses

non-binary - someone who identifies themselves as either both male and female, has an identity between male and female or has a neutral or ‘unrecognised’ gender identity.

menstruation - a natural process of discharging blood and other material from the lining of the uterus at intervals of about one lunar month, beginning from puberty until menopause (except during pregnancy).

Pharmac - The Pharmaceutical Management Agency (PHARMAC) is the New Zealand Crown agency that decides, on behalf of District Health Boards, which medicines and related products are subsidised for use in the community and public hospital

Tags:   the costly issue of having a ute features menstruation frustration