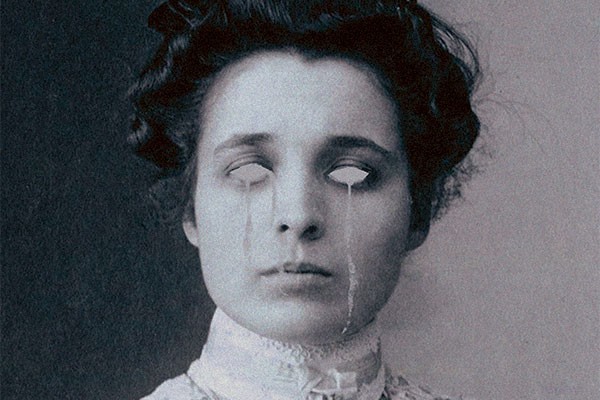 In the Victorian period, photography was a pretty new and terrifying thing. You could chuck a papier-mâché head in a photo, say it was a ghost, and a lot of people would believe you. And then there were spiritualist mediums who were using cheap magic tricks to fool the public for profit.

The world of paranormal beliefs is full of lovely ideas like guardian angels, meeting all your childhood pets, and eternal love from a benevolent being. Then there are gross things, like ectoplasm. Ectoplasm was believed to be a substance excreted by mediums during trances: a slime-like goo made from the lining of cells that emerged from all (yes all) of the body’s orifices to take the shape of a human spirit. Old photos show remarkably unconvincing “ghosts” with disgusting mucousy cords going up stoned-looking mediums’ noses, mouths, ears and, yup, bums, and vaginas. Thankfully the latter two “portals” are discreetly covered by skirts and tablecloths in photos, but you can tell what’s going on. Ectoplasm was said to be a substance between a solid, a liquid, and a gas that could take the shape of the spirit the medium was contacting. The photos are gloomy and often blurry because, predictably, ectoplasm would disintegrate on exposure to light.

Surely no self-respecting spirit would go through with that? If I were a ghost and the only way to reach my loved ones was to squeeze myself out of some creep’s anus in a big snotty blob, I’d probably give it a miss. Thanks, but no thanks.

But, of course, it’s not real. When flash photography became a thing, ectoplasm manifesting into solid spirits was shown to be (surprise!) wads of wet cloth shoved into various bodily orifices, pulled out (bleurgh!!!) and connected to papier-mâché dolls. Cheesecloth could be coated in egg white, swallowed and regurgitated. There were tricks like putting a rubber glove on the end of a tube so it looked like you were vomiting an arm. A famous medium called Carrière was caught out when it was revealed that his “spirit faces” were cut out from newspapers and magazines. Some ectoplasm was said to emit a strong odour - I’m guessing this was the stuff people pulled out of their bums. These people were charging money to indulge in their weird exhibitionist fetishes and trick grieving clients into thinking they were talking to their dead loved ones.

There were more convincing reasons to believe in ghosts than egg-covered butt cloth. Anybody who has experienced isolated sleep paralysis (ISP) knows how scary and alien it feels. I used to wake up in the night completely paralysed but conscious, with a roaring static in my ears and a deep feeling of dread. Sometimes my thoughts would mingle with dreams that were so lucid I believed I was having some sort of out-of-body experience.

What I was going through was a very common form of ISP in which a person regains consciousness before the natural bodily paralysis that helps us to sleep peacefully has retreated.

While we now know its probable physiological cause, different cultures have had varying traditions to explain what ISP is. In Scandinavia, it is a “mare”, a damned woman whose spirit leaves her body when she sleeps to sit on the rib cage of villagers and give them terrible nightmares. In Fiji, the sufferer is being eaten by a demon. In Nigeria, it is the devil on your back. In North America, it is an old hag or a witch on your back. In Turkey, the culprit is a supernatural being called a jinn that is trying to strangle the sleeper. In Thailand, it is a spirit that can reportedly leave physical bruises. In Eastern China, it is a mouse that steals your breath. If you haven’t experienced sleep paralysis, these superstitions give some idea of how real and distressing the feeling is.

Personal experiences like ISP have always been the most common ‘evidence’ for the existence of ghosts. Some people endure what feels like a ghostly apparition wherever they go.

When you lose a limb, it’s pretty common for your brain to act like nothing happened. Phantom limb syndrome is a usually unpleasant, often painful phenomenon where it feels like the missing limb is still there. Sufferers report feeling like absent fists are clenched uncomfortably, like a missing leg is twisted underneath them, and itching and pain in a limb that is not there. Now there are medical explanations as to why phantom limb syndrome happens, but in the past?

Ghosts could be living in your plumbing, and I don’t mean like the basilisk in Harry Potter (pipes).

You walk into a room and get a sudden, creepy feeling – doom, depression, and holy-shit-someone-is-watching-me. You turn to leave RIGHT FUCKING NOW and you see out of the corner of your eye a shadow, something moving in the corner, a human-shaped thing. Obviously you have a ghost on your hands (and a poo in your pants).

It turns out that sounds between 7 and 19 Hz can induce fear, dread, and panic in around 22 percent of people. In nature things like volcanos, earthquakes, strong ocean waves, winds hitting the hillside, and tigers produce sounds of this frequency. This could mean we evolved the ‘ability’ to be scared when we sense it, even though we can’t hear it.

Organ pipes can also make sounds this low. In fact, pipes are pretty good at making all sorts of noises, and that includes the pipes in your house, especially if the house is old, with weird old plumbing, and especially if you’re kind of jumpy anyway.

And then there are the hallucinations. According to NASA, the ultra-low frequencies can be strong enough to vibrate the jelly in a human eye-ball, causing “smeared” vision, which can make specks of dust or the edge of your glasses look like large, shadowy, moving shapes. Couple this with our tendency to assume that shapes in our peripheral vision are humans, and you have yourself a full-blown spook encounter that will have you calling in a gaggle of priests and a truckload of smokin’ sage leaves.

So you have yourself a spooky old Victorian house, full of rotten old pipes that make tiger sounds, you’ve just been given the collywobbles by a wacky old lady with a sheet up her bum, and then you woke up in the night because it felt like your dead uncle was sitting on your chest. To make everything worse, the arm you lost in a glue-factory accident is bugging the shit out of you with itches from beyond the veil. You are already feeling skittish, when, to top it all off, you begin suffering headaches, auditory hallucinations, fatigue, and melancholy in the way only a Victorian can. Time to get a new house my dude!

Or maybe just check for gas leaks. According to Albert Donnay, consulting toxicologist and environmental health engineer at the University of Maryland, carbon monoxide poisoning can cause all of these symptoms. Since Victorian houses were just lousy with leaky gas lamps, it’s likely that a good number of your ancestors had chronic CO2 poisoning, contributing to fainting fits in house-bound ladies, and haunting experiences in general.

Natural gas used to be odourless – the familiar sulphur small we associate with gas actually comes from mercaptan, a substance added to the gas to make it easier to detect. Mercaptan was first added to natural gas in Germany in the 1880s, and steadily became so normal that it is now recognised as “the smell of gas”. Donnay says that carbon monoxide poisoning has been linked to haunted houses since at least the 1920s, right before electric light became the less ghostly way of illuminating your home.

If you think it is sad that we don’t see ghosts as much as we used to, you can at least be thankful that we aren’t plagued by the terrors of sleep paralysis, vibrating eye-balls, and gas poisoning.

Ghosts could still be real, and we want to hear what you think about them! If you have a true ghost story, please email critic@critic.co.nz