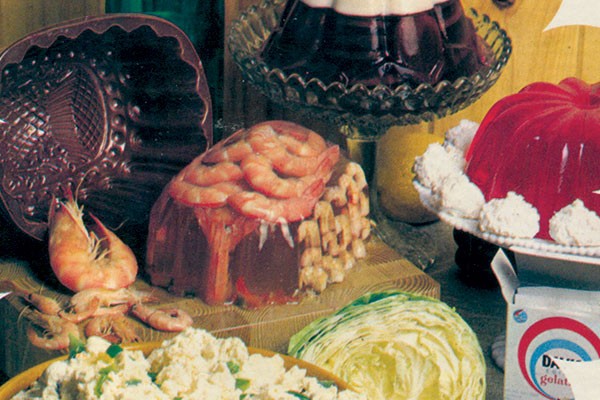 In their time scouring op shops, my friends Mary and Reg have gleaned three relics of a particular point in the ‘70s where food got very, very strange. Critic wanted to know what those wacky old recipes tasted like, so, in the interests of our readers, we bravely concocted and feasted on some of the horrors inside.

Be Bold with Bananas has glistening brown banana sludge on the cover, printed on a kind of textile cover that somehow makes the food look worse. This is under the “family favourites” section. The recipes were chosen “according to hundreds of requests. It is described as a “delicious spicy brawn”. I am glad we live in this decade.

Here’s a snippet from the recipe to give you some idea of what we inflicted on ourselves: “Add the gelatine and tuna to the pineapple with the cheese, onion, mustard, and mayonnaise.”

Tash didn’t want to eat any but she had to. You’ve got to get tuna and pineapple in your first mouthful. Comments from the dining table included “that could be a lot worse”, ”quite good”, and “kind of awful but I kind of want to keep eating it.” Mary said it was a  “good protein hit,” but “It really does feel like someone else has already eaten it.”

Everyone ate a bit of it and then kind of stopped and went quiet. It wasn’t as bad as we thought it might be. I liked the pineapple. I went shopping for a jelly mould at Kmart. I had a headache and it was the day before Father’s day, so it was extremely busy and I got flustered. There were no jelly moulds, but I found a kids’ volcano toy that would do.

We thought the beetroot jelly would be nice. It’s just jelly and beetroot juice, with extra vinegar, sugar, gelatin and salt.

As soon as the gelatin hits your tongue it dissolves and you’re left with beetroot that tastes kind of more watery than usual. I thought it would be more like a sort of chutney, but it was just like horrible cooked tinned beetroot. It was basically like mild, vinegary, salt-and-peppery jelly. It looked amazing.

On a fork, combined with the tuna pie, it was awful. Mary says it’s on par with Reg’s mum’s “seafood-extender curry”. A strange jelly sandwich, with cottage cheese in it for some reason, served on a lettuce leaf.

We didn’t really know what these were meant to be, whether they’re a dessert or a snack or what. That’s kind of why we made them.

I don’t know if the green jelly was a good choice. It made them seem more snotty. We thought it would be nice but it was horrible, like lumpy phlegm. Reg said it tasted like a lime spider that someone spat in. The cottage cheese was disgusting. The texture was definitely like something that has already been in somebody’s mouth.

We got a glass of water.

If it was just jelly and pineapple, with a cherry in the middle, that would have been lovely. Why the cottage cheese? I think cottage cheese was big for a bit. It was probably a low-fat dessert thing. Even if it were cream cheese, it would have been less horrible. Someone dropped their fork. They probably picked up something tastier off the floor than what we were eating.

Then I tried the combo mouthful. When it hit the back of my throat, I felt a physical wave of rejection from my body. Not even a gag, just a feeling of “please don’t”.

We were sad because we liked all of the ingredients. I thought these would be quite nice. Unfortunately there is no picture for these. To make them, slice bananas in half lengthwise, put a sausage between the slices, wrap them up in bacon, then put a half-ring of pineapple over the top and bake.

These looked like little people calling for help. The ends had gone an awful colour, although that may be because we didn’t dip them in the lemon juice.

A mouthful of banana—a bit meaty. There were a lot of different smells. It was pretty nice. I’d eat it. Reg thought the bacon was inedible. The sausage and banana was ok. The pineapple was weird. The texture of the banana was like. . . jelly. Would’ve been nicer without the layer of snot underneath it. Meaty and fruity with a slightly weird aftertaste. Now we come to the boldest banana of all! The photo shows the banana candle next to a real candle, to show you just how little they resemble each other. Surely these were a joke? It doesn’t look like a candle. It looks like a dick. The recipe is: stick a peeled banana in a pineapple ring, dribble mayonnaise over it, put a glace cherry on top.

I slice the banana in half. Fuck the patriarchy. We hoped that because it’s just a banana and nothing weird happened to it, it couldn’t be too bad. We were wrong.

The ingredients don’t just not go together, they react with each other. The acid of the fruit did something nasty to the mayonnaise, like orange juice and toothpaste. The pineapple made a minty kind of taste. The cherry was weird. “It’s like my mouth is a test-tube,” says Tash. There was nothing marrying the ingredients together at all. I tried a mouthful with the cherry included, thinking it might redeem the dish, but it made it worse. The pineapple is so sweet, but something happens and it doesn’t taste sweet at all. It tasted metallic and minty. Four disparate things put together that don’t like each other, which are trying to get away from each other.

Huge thanks to Mary and Reg for letting us into their home and filling their kitchen and stomachs with these abominations.

In making these recipes, we started to get some idea about why they became popular; they look great. Who wouldn’t want a magnificent, coloured, patterned centrepiece in the shape of whatever mould you have? Tash thinks that because pepper was as spicy as things got and people didn’t know about, or like, flavours, they went all out on colour and pizazz instead. The recipes are also pretty cheap. The jelly “extends” the food so it seems like there is more substance than there actually is. The ingredients are mostly tinned, which means you can stockpile food and whip up a meal from what you have in the cupboard. And they are quick to make, with many requiring no cooking. You just mix everything together and put it in a tin in the fridge. They can be made in advance and will keep for days.

However, there is a reason why some foods become timeless classics, and others become hilarious memories. Overall our feast was a disappointment. The things that have lasted into our modern cooking are the nice stuff: fruity jelly with fruit, sausages without bananas, bananas without mayonnaise. Jellied meat remains popular with cats, but not humans. Cottage cheese is put in places that don’t turn it into mucus.

I thought we’d leave our feast with full stomachs, but sadly, most of the food went in the bin. Later that night it struck me that the muck was still inside me and I felt unsettled and nauseous.