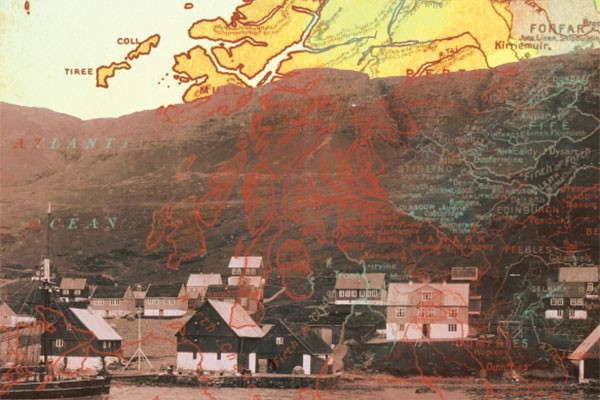 The Village at the End of the World

In ancient Celtic carvings, on dappled rocks where moss has not yet crept, one may read of the primordial myth of Creation; a tale of Oran Mór, or The Great Melody. This haunting, mighty melody – the very breath of a long-forgotten god – sang Creation into existence, hewing mountains out of stone, coaxing forests out of the rich earth and hauling islands from the ocean’s depths. As I stood there on the prow of our little boat, watching black cliffs rise from the sea, I could hear this music in the cries of the gannets and in the roar of the waves.

Out in the North Atlantic exist a collection of wild islands, rising in jagged ranks off the northwest coast of Scotland. Leaving my cosy cottage on Lewis, I set off across miles of ocean to the splintery archipelago of St Kilda, abandoned over a century ago. Here, the weather is a fickle, flighty mistress, cloaking the islands in mist and rain one minute, and melting into calm seas and beatific sunshine the next. For thousands of years, humans have fought to survive out here, seemingly on sheer determination, sea-water, and salted puffin flesh. Little stone dwellings are all that remain now of these hardy people; the wind, rain, and waves have worn away everything else. These crumbling remains, like the ruins of Babel, conjure up the memory of the farmers, shepherds and fisherfolk who determinedly created a home for themselves on the edge of the world.

“See here,” chuckled the captain as he watched our contorted faces, “here’s a tale to really stir your bellies!” Prying my frozen fingers from the railing, I tottered over to the ladder, and carefully climbed down into the dinghy. Long ago, two rival families – the MacDonalds and the MacLeods – both laid claim to Hirta, the largest island of St Kilda. After a great deal of squabbling, it was agreed that a boat race would take place and the islands would be awarded to the crew that first laid a hand on Hirta. As the boats drew nearer to shore, the MacDonalds overtook the MacLeods, jeering and laughing at their rivals. Not to be outdone, a MacLeod hatched a plan. He cut off one of his hands, and with his remaining hand, he threw it onto the land. Thankfully we didn’t have to part with any limbs upon landing – only our dignity as we floundered and scrambled our way onto the sand.

Village Bay is a gloriously green basin, fringed with white sand and dotted with abandoned houses. These old homes, with their gaping doorways and fractured walls now housed weeds, wildflowers and sheep. They were shells of their former selves; like headstones in an old cemetery, they stood as memorials to those who had lived, breathed and died under their roofs. Small slates sat in empty fireplaces or on doorsteps, marked with the names of those who were the last to leave. It felt odd to be standing in a crumbling cottage that had once been the home of an island family.

One house beckoned to me. Its slate informed me that this sad little swelling was the former home of Lady Grange, the wife of a Jacobite sympathiser. Lady Grange had been exiled to this island when her husband became fearful that she might spill his secrets. The poor woman felt perpetually out of sorts here on St Kilda, which she described as a “wile neasty, stinking poor isle.” Boswell and Johnson discussed the matter of Lady Grange during their 1773 tour of the Hebrides. Johnson believed that if “M’Leod would let it be known that he had such a place for naughty ladies, he might make it a very profitable island.” I had a sudden vision of a wild band of shady ladies-cum-harlots scampering all over the island amongst the bewildered sheep.

On a hill, through large sheepfolds, were the curious little “cleaiteans” that decorated the hillside. These dome-shaped structures are constructed of flat boulders with a cap of turf on the top, and were used for storing peat, grains, nets, preserved meat and hay. I crawled into one, and peered through a chink in the wall at all the other tourists, striding around the island with their cameras and lunchboxes. Bile rose in my stomach when I realised this particular cleaitean was also inhabited by the decaying, bloated corpse of a long-dead sheep. I scrambled out of there immediately and sat down next to a nice friendly-looking alive sheep.

"Where is the land which has neither arms, money, care, physic, politics, nor taxes? That land is St Kilda." So wrote Lachlan McLean, a missionary from the island of Tyree in 1838. Virtually ignored by the mainlanders (who were too busy fighting petty battles and squabbling over crowns), the St Kildans were left to develop their own form of society. A form of communism emerged wherein decisions affecting the whole community were made in a collective manner. Work was assigned on the basis of individual skill, and there was no such concept as ‘private property’ – excepting the beds and cottages one slept in. Every morning, a daily ‘parliament’ met in the street after prayers. Here, all the adult males decided on the day’s activities. There was no leader to this meeting, and as you might expect, vigorous arguments often ensued. According to one islander, "discussion frequently spread discord, but never in recorded history were feuds so bitter as to bring about a permanent division in the community". If only the same could be said about Westminster.

Before steam ships, motorised ferries and airplanes, the only means of making the journey from Harris to St Kilda was by open boat. This often required several days and nights of rowing across the open ocean. While I relished the isolation, I couldn’t imagine taking such a voyage in autumn or winter. After the Battle of Culloden in 1746, it was rumored that Bonnie Prince Charlie and a few of his Jacobite pals had escaped to St Kilda. An expedition was duly launched, and a number of British soldiers were ferried ashore to Village Bay, where they were greeted by a deserted village and the odd stray sheep. The St Kildans, fearing pirates, had hidden themselves away in caves on the western side of the island. When the wary natives were eventually persuaded to come down, the soldiers discovered that the islanders knew nothing about the Bonnie Prince – nor had they heard of King George II!

Even into the late nineteenth century, the islanders communicated with the world by lighting a bonfire on the summit of Conachair and hoping a passing ship might see it, or by using the ‘St Kilda mailboat’. This was the invention of John Sands, a visitor to the island in the 1880s. During Sands’ stay, a ship called the Peti Dubrovacki ran aground in Village Bay. The captain and eight of the crew were saved, virtually seconds before the boat was dashed to pieces on the rocks. Romance bloomed between one of the Austrian sailors and a St Kildan lass, although neither understood the language of the other. After around five weeks, supplies were running perilously low. Sands retrieved a lifebuoy from the hapless Peti Dubrovacki and attached a message to it, before flinging it back into the ocean. Nine days later, it washed up in Birsay, Orkney, and a rescue was arranged, much to the chagrin of the two lovers, who tearfully bade farewell to each other with many sighs and kisses. Hereafter, the St Kildans would fashion a piece of wood into the shape of a boat, attach it to a sheepskin bladder, and place in it a small bottle or tin containing a message. These little boats were launched when the wind came from the north-west, and for the most part, successfully found their way to the west coast of Scotland – or, less conveniently, Norway.

Gone are the days of these little bladder-boats, bobbing happily from St Kilda to the mainland. As the nineteenth century drew to a close, there was a gradual increase in the type and frequency of contact with the world at large. Eventually the continual gawking of tourists and passing cruise ships, coupled with tales of the easy mainland lifestyle began to wear down the islanders. A plan for the evacuation was devised remarkably quickly. Sheep belonging to the islanders was sold, and the proceeds used to offset the costs of transporting the people and their belongings. On August 29, 1930, as the first blush of dawn bloomed on the horizon, the islanders readied themselves for departure. The calm and sparkling sea lay beckoning, as the sun warmed the impassive cliffs of Oiseval. It must have seemed paradise to the islanders as they farewelled their home, heading out into the great unknown, the mainland of hunger and haste. Ever respectful of tradition, the islanders left an open Bible and a small pile of oats in each house, before locking the doors and boarding the Harebell. Surely there were tears as the island faded into the ocean. The umbilical cord between man and island stretched and finally snapped as the faint outline of St Kilda dissolved into the sunshine.

Eighty-five years later, it was my turn to depart. As our boat pulled away from St Kilda, I turned and gazed out over the open miles of seawater. David passed me a mug of black coffee; I remember being rather flattered by the writing on the mug, which read “Captain.” In the distance, I could see a number of black masses rising out of the ocean, like giant standing stones. As we sped towards these monstrous towers, David told us that they – Stac an Armin and Stac Lee – were the highest sea stacs in Britain, at 191m and 165m respectively. And there they were; granite Behemoths rising from the grey water, circled by flocks of gannets overhead. How strange to think that something so seemingly dark and sterile could foster life. Here, on the precipitous, almost sheer cliffs, islanders shinnied, grasping at lazy puffins and gannet eggs, living in caves for weeks on end in order to provide their families with food throughout winter.

I craned my head upwards. I couldn’t imagine surviving on such a bleak cliff face, in the middle of the ocean. Yet, in 1727, an outbreak of smallpox on Hirta meant no one could collect three men and eight boys who’d been left on Stac an Armin a few days earlier. These hardy souls survived here for nine months, braving the winter in their godforsaken cave, huddling together for warmth and living solely on gannet flesh and fresh water. The Steward arrived from the mainland the following spring and rescued them; thankfully, all were safe and sound.

I left feeling that my presence on St Kilda had caused the place to lose some of its mystery. Fifty years ago, when it lay virtually forgotten, there were no day trips, or cruise ships – no inquisitive, seasick mainlanders scouring the island for suitable photography sites or a trace of the old islanders. Even as the mainland came into sight, I stayed on the deck, clinging to the rails. A rainbow broke through the mist. St Kilda would always remain a bastion of the old way of living; a safe haven for sheep, gannets, and the odd solitary soul.

Tags:   features the village at the end of the wo