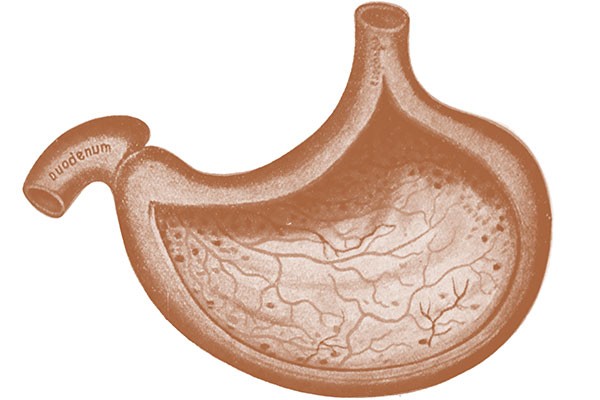 Lucy Hunter gives advice from old-timey doctors Profs Wood and Ruddock on how to detect poison, avoid biliousness, and how to plump up.

In the age of the internet, food can be scary. On one side, we have the cheeseburger lasagnes and all-bacon burgers of Epic Meal Time, on the other side we have the macrobiotic diet of Gwyneth Paltrow and the “chemical” fearmongering of the Food Babe. Don’t you yearn for a simpler time, when food was food and people used common sense to decide what to eat?

I was given Vitalogy, or Encyclopedia of Health and Home, by Professors Geo. P. Wood, M.D., and E. H. Ruddock, M.D., PH. D. Vitalogy was published in 1923 and bought from a chemist in Timaru (the receipt is still inside). What I discovered is that westerners were just as silly about food a hundred years ago as we are now.

Most people in New Zealand have escaped the daily battle of finding enough food to eat that has been a sole focus of survival for most people, for most of history. We have the luxury of choosing what we eat. But it can be difficult! Do we cut out gluten, go paleo, kaleo, vegan, squeegan, or ignore it all and eat cheese on toast and ice cream? Our grandparents should have been spared this stress, but, thanks to Profs Wood and Ruddock, they were not.

“No wonder mankind is afflicted with 150 diseases,” read Vitalogy, “for their stomachs are made the dumping ground for so much that is injurious. So long as people persist in the idiotic course of having all sorts of food on their table, except the most healthful food - cooked or uncooked fruit - they may expect to be the victims of the multitude of diseases that afflict mankind.”

Grapes seem to have been treated with some suspicion. Vitalogy reposts “The British Government Reports tell how a regiment of soldiers swallowed the grapes, skins and all, and kept well, while the officers, who discarded the skins and seeds, grew sick. When the officers were ordered to eat the entire grape, all kept well.” There are pictures of grapes, both which look ripe and delicious, but one is marked “the wholesome grape” and the other “This is an unwholesome grape and should not be eaten under any circumstances.” They look identical to me, but apparently unwholesome grapes can be spotted “if at the point of attachment to the stems they have becomes loose and, particularly, if there is a slight discoloration apparent on the grape at this point, or if it has become at all soft.”

Each food item is treated with equal trepidation. Grapes with loose stems are not the only thing to be feared. The book contains near-identical photos of foodstuffs, such as apples and potatoes, with warnings that one is wholesome, the other “the kind of apples that are very unwholesome and should always go into the garbage heap”.  A United States Pure Food Investigating Committee’s Report reads: “The germs of disease and death are in many articles of our food”. It seems food choices could be as worrying in the ‘20s as they can be today.

Chia, quinoa, kale, acai, blueberries, salmon, yogurt, broccoli …“superfoods” come in and out of fashion. However, I don’t think any modern exaggeration of a food’s health benefits can compete with the Vitalogy love of apples: “The apple, the food of the Gods, the mainstay of life in Eden, the most luscious, the most precious, most health-giving food on earth.” Apples were said to have “a marvelous power of awakening to healthful activity all those secretions of the body that tend to cleanse the entire system.” Secretions - guh-ross! But I don’t think even the most rabid of food-bloggers would claim garlic or cranberries to be the actual food that God eats.

Fish, once a superfood, is now declared too polluted with mercury to be eaten safely. This is not out first fish-related scare. Leviticus 11, 9-12 says some fish are fine to eat, but others “shall be even an abomination unto you; ye shall not eat of their flesh, but ye shall have their carcases in abomination.” A chapter of Vitalogy is titled “FISH. WHY FISH IS SOMETIMES INJURIOUS AND DANGEROUS - WHEN FISH IS WHOLESOME - HOW TO TELL WHETHER FISH IS GOOD OR BAD - DIFFERENT WAYS OF COOKING FISH.” Fish is called the “most nourishing and healthful” as well as one of the most “appetizing flesh foods.” But fish came with potential danger. Decayed flesh was believed, if “taken to the stomach,” to act as a slow poison that was “the cause of a great dysentery and other troubles.” This “wholly unsuspected poison” could take effect months after the guilty fish was eaten. As a side note, “Freezing does not kill fish. If carefully and gradually thawed out they will swim away as if nothing had occurred, and the may be kept a long time in this frozen state.” Ahem. I suppose not many people had freezers to try this out, so it went untested?

Our main obsession with food is the Western world is surely weightloss. Our abundant sources of nutrition and calories, a triumph of the modern world, are now a major cause of grief as we gaze on the scooped-out flesh of diminutive fashion models.

Vitalogy has a different take on body image. If you wish to become fat or plump, Vitalogy recommends, along with starchy food and plenty of rest, that a person eat oysters, though not with vinegar or pepper. “Activity of the mind or body prevents fattening,” so try not to move or think too much. Eat plenty of fresh, ripe fruit, potatoes, meat, or fried mush, bread and butter, cocoa, and soup. There are certain Brahmins or priests of Asia who are very corpulent. Condiments, spices, and stimulants should not be taken. “To sum it up, then: to become plump one must use plenty of water, starchy food, oysters, fats, vegetables, sweets, and take plenty of rest.” I can’t find any tips for weight loss in the book.

By the way, don’t you just hate biliousness? People who are in the habit of taking cathartics or emetics, when the period arrives for their usual “cleaning out” are generally sure to be troubled with biliousness. You know what I mean?

Nowadays we tend to call it bloating, but biliousness has troubled people with its “langour, dull headaches, sleepiness, and other symptoms of uneasiness” for a long time. The remedy is to drink the juice of two small lemons (or one large one) twice a day. If that doesn’t work, try one-half tablespoon of saleratus in a tumblerful of cider every morning and evening.

We hear a lot these days about additives in our food and how they could be harming us. Believe it or not, our great grand-parents had it much worse.

The chemicals used to preserve our food and drink had, according to Wood and Ruddock,  become “a serious menace to health”. There were thousands of “invalids” whose chances of recovery and life “depend on their getting the purest drugs and food, and there can be no doubt that some of these are are killed every day by the poisons in milk, butter, and meat, put there by farmers, grocers, and butchers to save trouble or avoid the risk of goods spoiling in their hands”. Sound familiar, Food Babe?

Salicylic acid was used to preserve foods in the ‘20s, While their extract was somewhat effective, it also caused digestive problems such as gastric irritation, bleeding, diarrhea, and even death when consumed in high doses. Salt and zinc were put in canned peas to give them “A pretty green colour” which could result in “a sleepless night, colic, headache, loss of a day’s work, and general misery” which can go on “indefinitely, rendering life a burden, without any suspicion in the victim of the real cause.” Coal-tar extract was used in confectionary, ice cream, soda water “and to many persons they are poisonous.” A Western hotel in 1926 lost hundreds of guests who left one by one as they became sick for a mysterious reason. They blamed the water and ice, but the mystery sickness was eventually traced back “by careful experiment” to a cheap coal-tar flavouring extracts.

The Vitalogy authors hoped, however, that “the era of chemical food may be postponed indefinitely.” Much of the food for sale at the time had been adulterated with substances added that “can be made to resemble it in appearance and flavor,” but which were often “injurious to health.”

Doctors don’t seem to use poultices much anymore, and it is a shame. We could debate their efficacy, but they sound fun and tasty. A poultice is a soft, moist mass of cloth, bread, meal, herbs, etc., applied hot or cold as a medicament to the body. Vitalogy is big on poultices. For example:

What could make dying from a snake bite worse? Profs Wood and Ruddock have the answer. Onions, pounded to a paste and applied raw to the wound, followed by fresh applications “as soon as a disagreeable odour occurs.” In dangerous and critical cases the whole person should be enveloped in onion poultice, then bathed in tepid water and recovered “as the unpleasant odour is produced.” Though the profs claim that “patients in the very agonies of death” have been cured by this, many must have died miserable, cold, stinky, with streaming onion eyes.

Cramp in the stomach could be treated orally with hot peppermint tea and “as much common soda added to it as would cover a nickel,” but also with a poultice on the outside of the body. Precisely a mustard poultice on the stomach left until considerable redness is produced. Boils can be treated with an egg white combined with “from one half to one-teaspoonful of powdered Spanish Flies,” though later the profs say the ingredients of the poultice don’t matter “for the reason that it is the heat and the moisture that cause it to ripen.”

Professors Wood and Ruddock were clued up on some health advice, but many ideas in Vitalogy seem pretty weird to modern readers. So if modern food talk is getting you down, be thankful that it isn’t laced with coal tar and salicylic acid, that you aren’t freezing fish alive in the belief they will come back to life or smearing your dying friend with pulverised onions, or stuffing yourself with enough oysters and trying not to expend energy thinking in an effort to plump up.