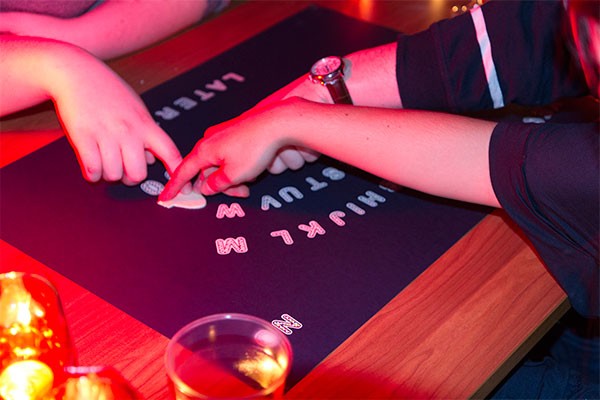 Interview With A Ghost

The Critic team attempt to contact the dead through a Ouija board in the office.

In the office, Ceri, Laura, Tash, Joe, Jean, Bij and I sat around waiting. Red light from the candles flickered on our faces and over the board. My workmates and I had had a couple of wines each and were trying to get scared. We held hands, breathed deeply and closed our eyes. “We are here in peace,” I said mystically. “Is there anybody there who wants to talk to us?”

For those who don’t know, Ouija (pronounced wee-jah) boards are “talking boards” through which living people can supposedly talk to ghosts. It is a relatively new invention. The Ouija board was patented as a parlour game in America in 1890 by E.C. Reiche, Elijah Bond, and Charles Kennard. The letters of the English alphabet were painted in twin arcs across the middle of the board. Below the letters were the numbers one to ten. In the corners were “YES” and “NO,” underneath, “GOODBYE.”  The only other piece to the set was a heart-shaped wooden planchette with a hole in it. Participants place their fingers on the planchette, ask it questions, and the planchette moves terrifyingly about the board to spell out words.

I had wanted to buy a Ouija board but couldn’t find one for sale in Dunedin. I had make one instead. I got some spooky supplies – a piece of purple cardboard, some polka-dot letter and number stickers, and a packet of little wooden aeroplanes that I thought would make good planchettes. We didn’t have enough letters to spell “GOODBYE” so we wrote “LATERZ.” I also got red cellophane to tape around glasses to put candles in and make creepy red light. I asked Ceri, our feature designer, to draw on the plane so it looked like a scary demon, but instead she made it look like an even more adorable plane, now with a friendly face. So far we hadn’t achieved the spooky mood I wanted to.

Joe and I had just read a book on Mother Teresa called “The Missionary Position: Mother Teresa in Theory and Practise.” It said she was a corrupt person. We decided to ask her, through our purple Ouija board, if it was true. “Why are you such a bitch?” someone asked.  “We’ll try nice and then we’ll get mad,” said Ceri. “Blessed be, Mother Teresa,” said Tash. “Are you really a bitch?” asked Joe. Nothing happened. “We need to give her some kind of stimulus to react to,” said Ceri. I said “bet you can’t do a miracle, Mother Theresa.” She wasn’t replying and we decided we were aiming too high. The planchette hadn’t budged. I told people off for letting their arms touch the table.

Maybe red candles and holding hands wasn’t going to be enough to summon the spirits. We put on the Hannibal soundtrack and told scary stories for a while, hoping to get spooked. “Is anyone hungry for person right now?” said Ceri. Joe told a story about the guy in Germany who arranged to be eaten by a cannibal. Laura told one about a woman trapped in an elevator and not found until a month after her death. I told my favourite story - my old drama teacher’s son who went haywire after a nasty breakup and was found by police to have been living for months in his ex girlfriend’s roof, spying on her and her new boyfriend through holes in the ceiling.

We had some more wine and tested the planchette to make sure it wasn’t sticking in place and blocking the ghosts. “It’s pretty slippy,” said Ceri, “You can feel it wiggling. They’re trying to get through. Fuck it, tonight I’m a believer. Come at me, Mother Theresa.” She didn’t. After Mother Teresa’s no show, we asked for a random person, anybody, we didn’t care. This time, the planchette started to mooooooove…

Kennard, one of the board’s first marketers, claimed he called the invention “Ouija” after the Egyptian word for “good luck.” Ouija is not Egyptian for good luck, but since the board reportedly told him it was during a session, the name stuck. In 1982 William Fuld took over the company. Fuld said that he himself had invented the board and that the name Ouija was a fusion of the French and German words for yes (“oui” and “ja”). The boards were marketed as innocent parlour games with no connection to the occult. They were were said to read minds or tell the future, not contact ghosts.

“Is anybody there?” Once it got going it could really hoof it. It moved to yes. I told Joe off for having his finger in a weird position. The recording of our interview goes hushed with whispery giggles at this point. We held our fingers on the planchette as it spasmodically hopped around the board.  It went to the ‘2’, then the ‘P’. Tupac? “It’s definitely Tupac”, said Tash. The planchette went to “No.”

Parker Brothers, who make the board games Monopoly, Cluedo, and Trivial Pursuit still have the rights to the Ouija board, which is marketed as the “Mystical Oracle.” Not everyone swallows this innocent sounding title. Conservapedia describes the Ouija board as “an occult device currently manufactured by Parker Brothers under the auspices of a board game.” The website warns “evil demons pretend to be cooperative ghosts in order to trick users into becoming spiritually possessed.” In 2001, Ouija boards were burned in Alamogordo, New Mexico, by fundamentalist groups alongside Harry Potter books as “symbols of witchcraft.”

We decide to make a new board so the planchette could slide better. “We have meters of that fucking news roll,” said Tash. “Lets use that.” Joe was worried there really was a ghost and we were being too sceptical. We accused him of moving the planchette and he swore he wasn’t. We all agreed that Joe was going to become a cult leader after this. He has a deep voice, calm demeanor, and was quickly becoming a Ouija believer.

American Spiritualist Pearl Curran popularised the Ouija board as a divining tool during World War I. Using a Ouija board, Curran believed to be able to communicate with a spirit, Patience Worth, who had died in the 17th Century. There was never any documented evidence that Patience had ever been a living person.

“Is there anything we need to know about the Critic office?” said Tash. The little balsa planchette spun to N, then O-H-U-G-H. “We have to get rid of him,” said Joe. “Maybe we need Hugh here to talk to the ghost?” said Laura. “We need to specify,” said Ceri. “Do you want to speak to Hugh?” The planchette moved to N-O. “Hugh isn’t here,” said Ceri. “How do you feel about that?” G-O-O-D, said the ghost. “Why no Hugh?” asked Laura. S-H-I-T, said the ghost. Poor Hugh came back in the office and found us laughing.

Popular culture adheres to the idea that Ouija boards are potentially dangerous tools of the occult. In the 2007 film “Ouija” a group of adolescents use the board and a murderous spirit starts to follow them. Four years later, “The Ouija Experiment” portrayed a group of friends whose use of the board opens, and fails to close, a portal between the worlds of the living and the dead. Horror movies have the boards predicting deaths and facilitating demonic possession.

“What is your name?” I asked. P-J- “PJ Harvey?” said Ceri. NO said the ghost. P-J-O-D-I-E. “Did we get your name right?” YES. Now the ghost really got going. Pjodie told us her favourite colour is black. She said the afterlife is bad, but she is happy. She was a student at Otago in 1983. She studies English Lit (oo yeah, hi-five,) and said she likes Critic. But she had an issue with the Critic editor from 19-- (date obscured for legal reasons). She couldn’t remember their name, but they had done something bad to her she didn’t want to talk about. S-E-C-R-E-T, she said. Holy fuck. Pjodie left. L-A-T-E-R-Z.

Ouija consultations have the potential to mess with people’s lives (like that editor from 19--). Take the case of Stephen Young, an insurance broker from East Sussex who was convicted of murdering newlyweds Harry and Nicola Fuller at their cottage in East Sussex in 1994. Young won the right to a retrial when it was found that four members of the original jury had consulted a Ouija board to help them reach their verdict.

The last ghost we chatted to was called George. He was at Otago in 1953. “Good shit, George,” said Ceri. “I bet you had some rad doowop and shit. Did you like jazz, the devil’s music?” NO said George. Watch it Ceri! He had a secret too. He said it was of a sexual nature, and it was making him sad. It turned out he had been a gay man who couldn’t tell anybody about it because of the prejudice of the time. We asked what his sex life was like. He said B-D-S-M. We asked what kind and it said S-P-I-N-K-I-N-G. Spanking?

Sadly, big old dorky science has come along and ruined everyone’s fun with a giant wet blanket of a rational explanation for the Ouija board. The ideomotor effect refers to the influence of suggestion or expectation on involuntary and unconscious motor behaviour. Sometimes if you are concentrating hard on not moving something while expecting the thing to move, you will subconsciously move it. Another example of the ideomotor effect is the movements of rods and pendulums in dowsing. The effect has been demonstrated on the Ouija board by stacking a series of plastic disks on top of the planchette. If the movement were coming from the planchette, the disks would be expected to slide away from the fingers from the bottom layer up as they try to keep up with the movement. What happens is the opposite - the disks are pushed forward from the top down and it is the planchette that seems unable to keep up. The movement is coming from, surprise, the fingers of the people playing the game. Another test the spirits have failed to pass is if the participants are blindfolded and the board spun around, the planchette moves as it usually would, to where the letters had been before and the places where “yes” and “no” had been.

“Why don’t you guys close your eyes, so you don’t move it unconsciously?” asked Jean. “Because it won’t work,” said Ceri. “It stops working cos it’s not real,” I said. It is understandable that people are scared of Ouija boards. Even knowing about the ideomotor effect, not believing in ghosts, and hooting with laughter while we did it, it felt like it was real. The planchette slides along with strong determination. It stops on letters and swivels around. It moves to leave when you don’t want it to. It’s an example of how strange our brains are and how the control we think we have over them is probably largely an illusion. We had a fun night with the Ouija board, even if we didn’t find out much about the afterlife.

Epilogue: The Monday after I was at work and Elaine from Planet Media asked if remembered seeing her on Friday night. I said no I didn’t. She said “It was strange. Your eyes were glazed over and you were staring at me. Vacant. Then you gave me a hug.” “Ew,” I said. “That sounds creepy.” “It was,” said Elaine. “You’re eyes looked so weird. It was like you were possessed.”