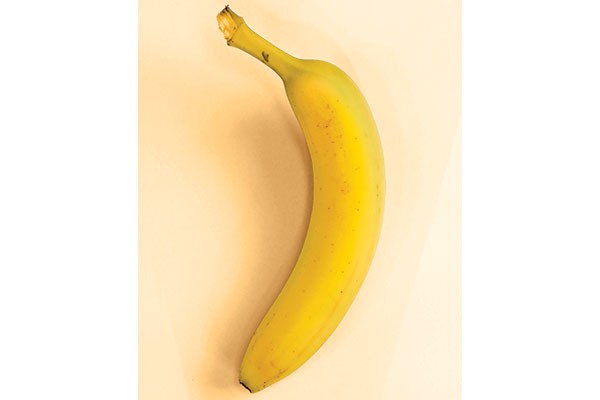 The Big Banana Blow Out

You may want to sit down for what I’m about to smack you in the face with: bananas are dying, and it isn’t the most a-peel-ing situation. Bananas all around the world are starting to die from a deadly and uncontrollable new strain of Fusarium Oxysporum f.sp. Cubense (Panama Disease) —the same pathogen that wiped out nearly the entire population of conventional bananas in the fifties. That’s right, bananas have gone extinct before, and they’re doing it again —well, kind of. The genetic modification used to create our bananas was a result of the big extinction of Gros Michel, colloquially recognised as ‘Big Mike’ bananas; the sweet and fleshy fruit your grandparents probably ate. Taking this out of the nutshell and actually looking at the situation from a more objective viewpoint however, the future extinction of the banana is a lot more complex than it first appears.

Before we get started, here are five fun banana facts you need to know (Okay, so you don’t need to know them but hey, bananas are rad as heck!)

Everyone seems to be shitting bricks when they learn that a ubiquitous lunchbox staple is going extinct right underneath their noses. But species of bananas have gone extinct before. The banana flavouring in sweets and ice creams can taste artificial and strange because it is based on a now extinct banana. The Gros Michel ‘Big Mike’ banana tasted different to the banana we have today, and its flavours were mimicked in the confectionery industry. Every time you drink some banana milk you are tasting the fruit that your grandparents grew up with. It was similar to our modern Cavendish banana, only a little bit rounder, shorter, thicker and sweeter in taste.

Humanity was trying to pull itself back together after WWII ended. The Civil Rights Movement was beginning in the United States, a new generation was inventing what it was to be a “teenager”, and the economy was booming. However, in the world of the banana, things weren’t looking so cheery. Panama disease had arrived, and it was here to stay. Like a rogue piece of popcorn that gets trapped between your molars and is there until you die, the deadly fungus that took up a vendetta against the banana was the Maggie Thatcher of harmful pathogens. Ruling with an iron fist, Panama disease wiped out over 90 percent of the world’s population of ‘Big Mike’ bananas, and revelled in its success at destroying one of the world’s most popularly consumed foods. Gros Michel bananas can still occur naturally in some rare and lucky places around the globe that aren’t affected by Panama disease.

The bananas we eat would not exist without artificial selection. Ray Comfort, a New Zealand local and Evangelist, appeared on television in the early 2000s to introduce the answer to the world’s largest debate: how do we prove God exists? His idea is that the banana is perfectly formatted for the human mouth, with its three grooves on the top and two on the bottom to fit a human hand. Is this evidence the world is designed for humans by God?

Comfort’s argument is flawed in that bananas have been so genetically modified they lack the ability to reproduce. Each banana is an asexual clone bred through banana-tree “pups” - manually-cut side-shoots of the parent corm, including a stem and some roots. Without humans the bananas we eat could not survive. Wild bananas are small, dry, cacao-pod-looking things loaded with inedible seeds and hard flesh. The soft, yellow flesh of the edible varieties is the result of collective mutations cultivated thousands of years ago. But this selection has rendered the fruits of these plants completely sterile, and so unable to survive in a wild “natural” state. Comfort also doesn’t mention that edible bananas only grow between 30 degrees north latitude and 30 degrees south latitude. Many people who lived outside of the tropics had never seen a banana until well into the 20th century.

Bananas come in many different species, with over twelve hundred varieties. Each plant within a species is almost genetically identical. This can be of huge benefit to cultivators for producing consistent and high quality harvests, but also means that what can kill one banana can kill all of them. Panama disease began to slowly infiltrate the banana as early as the roaring twenties. At the time scientists had less knowledge than they would now of pathogens and genetic mutations. Panama disease —known back in the day as Race 1 - spread and thrived. By the time the pathogen and its methods of destruction were understood it was too late to save the precious yellow berry. As the golden era of Hollywood prevailed, the death defying rapture of the Gros Michel was unfolding in front of everyone, and there was nothing they could do.

Panama disease is a soil pathogen that infects the root system of the banana plant. From there it goes on to colonise the entire population, pillaging and wiping out all hope of resistance against the machine-gun-armed fungus. The only way to cure the disease is to treat the affected soil with chemical treatments which have such awful environmental impacts they have been almost entirely banned from being used. This leaves no hope for the future of our tasty and phallic shaped fruit. As the pathogen infiltrates the roots, it gets into the vascular system of the plant, travelling up to the top and destroying not only the fruit but also the leaves and the plants ability to survive. Unless a strain of the banana that is both resistant to Panama disease and fits well into the human standards of what constitutes a ‘good’ banana can be found, the soil affected by Panama disease is unusable and the pandemic continues.

Fortunately for your grandparents and all generations to bear passage into the world since - the banana we know and love today, the Cavendish banana, was an almost perfect substitute for the ‘Big Mike’. The Cavendish banana was named after the sixth duke of Devonshire Sir William Cavendish. He was a missionary who supposedly fell in love with the fruit after seeing the image on a piece of imported Chinese wallpaper. Sir Cavendish was the first person in the developed western world to start cultivating the then extremely rare and expensive edible wonder. The Cavendish was longer, slimmer and less sweet than its rival the Gros Michel. It made a good alternative, for a while.

The Cavendish got its big break as the banana pandemic seemed hopeless. Like a superhero crashing through the door in the eleventh hour, the Cavendish banana’s resistance to the strain of Panama disease made it the new hottest banana celebrity figure in the free market. Unfortunately for the Cavendish this new found fame and prosperity only lasted thirty years before signs of trouble began to emerge on the white picket fences of banana farms around the world.

As the Cavendish came along, showing off its resistance to the deadly disease its older brother was smothering under, farmers began to replace the Gros Michel plants with that of the Cavendish. But all was not well. The cost of replacing the world’s fields and transporting/harvesting needs was expensive. The Cavendish bananas were much more delicate to handle. Their shelf life was lower than that of the ‘Big Mike’ and they had a bitter aftertaste. Nevertheless, the Cavendish did us well for 30 odd years. Then, in the early ‘90s, a plant pathologist from the University of Florida named Randy Ploetz discovered an all new strain of Panama disease dubbed Tropical Race 4 that posed a threat to U.S supplies of the fruit as well as to Latin American Producers. “There’s nothing at this point that really keeps the fungus from spreading,” said Professor Ploetz in an interview for CBNC around the time of his discovery. Twenty four years down the track the Cavendish, which makes up 95 percent of the world’s commercial banana population is under attack from Tropical Race 4.

But don’t despair —there is hope in the 1000 different types of banana able to be eaten by us. Most bananas in the world are used in cooking, rather than to eat raw or with breakfast cereal. Just like humans, bananas come in all different shapes, sizes, colours and sweetness. There are Saba bananas, Musa Balbisiana, plantain, namwa, ice cream, and viente cohol bananas. There are Mahoi, dwarf red, and golden finger bananas, Mysore and Mona Lisa bananas, just to name a few.

Why must we only have the one banana in our supermarkets anyway? There are so many different, edible and cultivable types of banana that if our commercial primarily sought after Cavendish does disappear like its front runner the Gros Michel, I don’t think we’d have a problem finding a new ‘banana’. We have at least five different selections of apple, one of the most mundanely boring fruits to ever exist. The banana is fun, fresh, and humorous in its shape. Bananas have been confined to the homogenised representation of the exclusively prestigious Cavendish that dominates our screens and supermarkets —and it’s time for a banana revolution!

This sounds fun, but here in the West we are lucky to have bananas as a small and funny part of our lives and diets. Large populations of people are dependent on the successful yielding of Cavendish bananas for their income. Bananas are the fourth highest grossing crop industry in the world, coming only behind wheat, rice, and corn. Cavendish banana crops produce multi-billion dollar revenues each year. They are also a large part of 410 million people’s diets around the globe, providing at least a third of their daily recommended calories. Randy Ploetz described the new strain of Panama disease as “a really insidious, hidden type of pathogen that doesn’t rear its ugly head until it’s widespread and causing a lot of damage.” One of the world’s top leading banana specialists, Professor Rony Swennen has claimed that if Panama disease hits Latin America once again then the risk of infection would spread like a wild bushfire. Ploetz believes that there are more than a enough optional replacements that are just as good, if not tastier than the mainstream Cavendish banana. Unfortunately consumers are picky, and they want what makes them feel comfortable and settled in the chaotic journey of our existence.

If we cannot find a way to control the spread of the new Panama disease, Tropical Race 4, we will be forced to adapt to alternatives to the Cavendish, while mourning the extinction of a beloved fruit that has suffered through two apocalyptic like epidemics. Watching the eradication of something so mundane you thought it would stand the test of time though? That is just straight up bonkers.