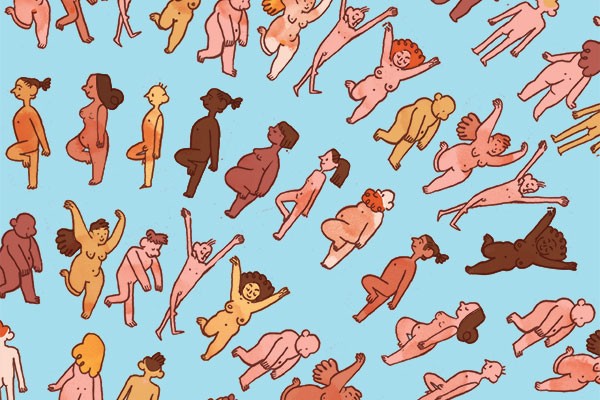 After spending some time in a nude sauna in Finland, Kirsty Gordge explores public nudity in New Zealand, asking the big question: Why don’t Kiwis get naked more often?

Boobs: perky, droopy, and wrinkled. Nipples: dark, pink and small. Bums: tight, big, and saggy. Hair: thick, black and styled. I saw all this and more when I entered the public sauna in Finland for the first time…

My friend took her clothes off. I had not seen her naked before; I took this as a sign that I was to do the same. I reluctantly removed my swimwear, and self-consciously walked to the showers to rinse. Everyone had been staring at me, and I soon realised it was because I was still wearing my togs. Now that I was naked, no one looked twice. I stood in the showers, no more than a metre away from a naked Asian lady.  My friend signaled we were done with the rinsing ritual, and I moved to pick up my towel, not to cover myself, just to bring it into the steam room and sit on it.

We entered and I sat next to a large lady with big nipples. I battled with the desire to simultaneously look and look away, resulting in an awkward ‘hi’ when greeted by her. The steam hid our bodies a little and I tried to relax. We were experiencing a cultural contradiction: I could not understand her comfort with the situation and she could not understand my awkwardness.

By the time we got to the dry sauna, I was finally feeling comfortable with my nakedness, and even managed to talk to a stranger. Walking around in shameless nudity became fun, I walked tall and with pride. I could get used to it, I could move to Finland and walk around nude at the sauna complex all the time! I reigned in my imagination as I got carried away thinking about how fantastic the freedom of being in one’s skin was…

Months later, I found that the OUSA sauna here in Dunedin was completely different. I felt genuinely uncomfortable in my togs. However, I knew if I suggested we all removed our clothes I would be shot down with glares or sarcastic laughs. The kiwis I was with were clearly not comfortable with public nudity. I thought back to when I was reluctant to remove my clothes and remembered that my heart was in my mouth for fear of it all being a practical joke aimed at me. I definitely understood the desire to wear togs… But wanted to spread the feeling of liberation by taking them off!

It became clear to me that the cultural gap between Scandinavia and New Zealand involved more than just language barriers and climate. It involved our social acceptance of public nudity.

Certain beaches here in the Land of the Long White Cloud allow people to sunbathe nude. Skin-comfortable people are relegated to their own little crook of sand out of the way of the general public. However, in other parts of the world the absence of togs on a beach is welcome. Close to home is Bondi Beach in Australia, where you might find a few stray tits on display, something that might make you double-take. Spain will also have a similar effect; although you might be the odd one out if you don’t remove your layers (Don’t forget sunblock - sunburned nipples are not a desirable souvenir).

However, public nudity is not purely reserved for beaches. Topless waitresses earn extra money by presenting their breasts for people to drool into their beer over.

Aimee Burns-Mawson, an Otago student, spent a summer working in the Albion pub in Singleton, New South Wales as a (fully-clothed) waitress. She was surprised when she saw the first shift of topless girls, unaware this was common in Australia and practiced at her new workplace. To start with, she was not very confident working alongside naked breasts as she “didn’t know where to look or what to do” and at 19 hadn’t really been on the pub scene much. But seeing nipples is something you can get used to, and Aimee’s perception of topless waitressing changed over time.

She talked to the waitresses and learned their names, “which very few people seemed to do.” She discovered that topless waitressing “is about confidence and feeling truly comfortable in your own skin”. Many said it’s a part of who they are. Aimee became so used to it that a nude breast wouldn’t warrant a double-take now that she is accustomed to seeing women walk around topless.

Most people do get used to all the exposed skin. Someone who is initially quite bothered by people without clothes on in public can adjust over time. It is mainly the rarity of the incidents that make us gasp. Surely if the naked body was the norm, we’d think nothing of it.

Do you avert your eyes when you see your flat mate wrapped in a fluffy towel, breezing into the kitchen to get some clean undies off the airer? Do you feel odd if someone walks into the kitchen in the morning just in a t-shirt and undies? A Critic Facebook survey indicated that the Otago students who answered were totally okay with (or even very keen for) flat nudity. Some of you cheeky thangs drink milk from the bottle in naught but socks, run to the loo in the night completely starkers, or just stride around freely all hours of the day (though perhaps not when guests are present). The confines of your own home tends to make nudity okay. But would you ever put the rubbish out with no clothing on your body whatsoever? Would you pop round next door to ask for some milk without stopping to put a t-shirt on first?

Getting naked in public is not actually illegal in New Zealand. This has resulted in some amusing incidents. Because there is no law prohibiting it, the police often go to the Summary Offences Act 1981 and consider:

•S27 Obscene/Indecent Exposure—If a person intentionally and obscenely exposes any part of their genitals. The person can be let off if they prove they had reasonable grounds for believing that they would not be observed.

•S4 Offensive Behaviour—If a person behaves in an offensive or disorderly manner in a public place, or acts in a way intended to threaten, alarm, insult, or offend someone.

•S4 Disorderly Behaviour—when someone behaves, encourages someone else to behave, in a riotous, offensive, threatening, insulting, or disorderly manner that is likely in the circumstances to cause violence against persons or property to start or continue.

In the ‘90s, a man in Whangarei painted the exterior walls of his house with all his tools on display, causing neighbours to call the police. He hadn’t done anything outside of his rights and no legal action was taken. Steven Preister was a child-welfare expert who got nude from the waist down while at a hotel and drunkenly chased four teenage girls back to their room. He pleaded guilty to disturbing the peace with his piece; they couldn’t convict him for having his meat and two veg on show. In Timaru last year, a nude cyclist was ticketed by police - not for showing his helmet, but for not wearing his helmet. Acting Senior Sergeant Ian Temple from the Southern District Command Centre here in Dunedin comments that public nudity doesn’t prove a problem for the police in Dunedin, adding that it’s far too cold for people to put their giblets on show.

But still, despite the legality of public nudity in New Zealand, the average person puts clothes on before doing anything remotely public. Like testicles in cold water, most people would shrink away from the idea of their neighbour peering upon their wobbly bits.

“Naturism” is a term used to describe the culture of practising, advocating, and defending public nudity. You can go to naturist facilities around the world, situated at private residences, clubs and resorts, swimming pools and hot springs, and rented facilities. There are clubs you can join in order to meet with other people and share the sensation of being naked in public, and they’re not necessarily all about orgies. Naturism is also associated with a healthy lifestyle, ecological or environmental rapport with the natural world, equality, liberty, pedagogy, and spirituality. It can lead to a teetotal, vegetarian, or vegan lifestyle. It’s amazing what can happen to your mind if you take your clothes off and let your body rule.

For members, being a naturalist means you are in touch with your nature and self-respect - as well as being comfortable with wearing no clothes for extended periods of time. “The Orchard Sun” is one such club in Dunedin that celebrates public nudity. Situated around Middlemarch, the club members meet frequently to enjoy many activities together. These include swims in the “lovely warm Physio pool”, interclub sports including “blind tent erecting” (that must be a euphemism), themed dinners, and a salt-lake picnic. All activities are performed in the nude. You might just come across such club nakedly venturing through the quiet bush of Dunedin.

When one makes their way down a tricky path to the shores of a nude beach, it’s safe to assume they were seeking it out. However, when nudity is sprung upon you like a topless waitress at a bar you’ve never been to before, or your neighbor enjoying a bit of sun on his bollocks while he paints the house, you might be a little more uncomfortable.

Public nudity is not illegal in New Zealand, but it’s certainly not socially acceptable. Why? It’s not like we haven’t seen it all before!