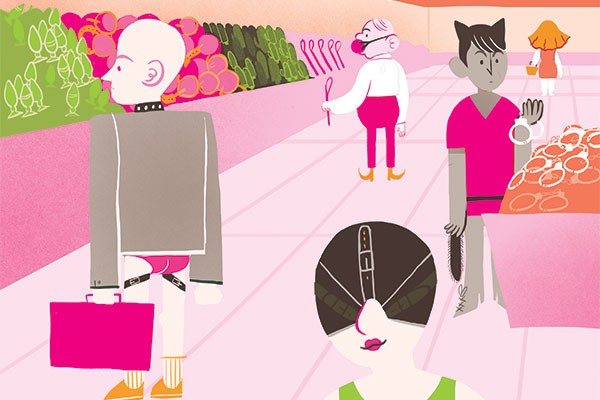 A Week In The Life Of A Sex Store Employee

“Wow, that is so cool! What’s it like? Are all the customers hella kinky?”

Disappointingly (or thankfully) for the wide-eyed newcomer, our stores are just regular retail stores, with the same bright overhead lights, tidy displays and clean merchandising that you would find in any other store. The same can be said of the majority of our customers, who tend to forgo the latex cat suits, chastity belts and gimp masks when they do their shopping - because, a. they are just regular people, and b. fuck trying to get everyday shit done in all that constricting garb.

However, after being in this job for a while it becomes easy to forget that things I consider to be unremarkable are often considered scandalous and taboo to another person. Perspective shifts really quickly in this industry, and your definition of what you find shocking will continually expand to include all kinds of fucked-up shit that you had never even heard of a year ago.

With all that in mind, here lies a glimpse into this amazing industry from behind the counter!

After opening the store, I set about doing the usual cleaning. My usual Monday customers trickle in and out of the store at regular intervals - mainly lone, unkempt older men (better known as “dirty old men”) chomping at the bit to peruse our very limited DVD section. The first guy is a regular who comes in every Monday morning without exception, and never fails to ask me whether we have any specials on transsexual and strap-on porn. As “Strap-On Steve” shambles out with shattered dreams once again, Crackhead Carl sprints in to pick up his daily supply of herbal Viagra (does he do anything except fuck? I can’t imagine him going grocery shopping or watching the footy nursing a 24/7 boner). Like sands through the hourglass, so are the days of our lives - welcome to another Monday. Variations of these two characters interrupt my consciousness all day, but it’s no big deal because they don’t linger for long, so I don’t have to expend any real interactive effort all day.

Tuesday is prime hangover day and I relish in the knowledge that I won’t see a soul until at least 11.30am, which is often a woman buying her first toy. I’m going to hazard a guess that they pick a Tuesday morning lunch break slot so as to not be recognised coming and going from this house of ill-repute. True to form, the first customer is a nervous lady in her thirties, shaking with fright at the thought of what kind of seedy jizz-stained old bastard may be awaiting her custom. She relaxes as she sees me, a young(ish) female with subtle makeup, decidedly tame clothing and a respectful demeanour. “Oh thank god, I was hoping there would be a woman working,” she gasps while patting her heart. Laughing, she buys a typical entry-level toy - a basic clit stimulator, which I’m sure will liven up her marriage something chronic.

After she leaves, two young guys walk in - one in regular clothes, one dressed as a cat. These two are regulars, and the kitty always wears cat ears, a collar, paws and a tail when they come in. They always buy a lot of anal toys and today is no exception. Once the cat came in on his own, out of costume. I recognized him without all the cat trimmings and it was kinda jarring seeing him in regular clothes. Even lacking the feline ensemble, he did appear to me to almost saunter silkily through the aisles and I could have sworn he gently rubbed his face against a couple of corners lazily, leaving his kitty scent around his favourite sections. I guess some people are just born as cats trapped in human bodies, y’know?

Later that day, I decide to go through the DVDs and re-organise them, and am delighted to come across the title “South Side Hos 3”. I put it aside to buy and sneak it under my flatmate’s pillow later that night, because SOUTH SIDE HOS, that’s why.

The store has only been open about ten minutes when a woman arrives, and I become somewhat miffed when I greet her and she doesn’t respond. However, I understand the reason for the silence when she wordlessly hands me an envelope containing cash, an itemised list of what she is to buy, and a note from her Master. The note asks me to sell her the requested items and to call him if there are any issues, ignoring the sub completely. I look over at her again, and upon realising that our eyes would never meet, I turn mine instead to the list now clutched in my hand. Luckily for the diligent sub, we have everything on the list, however I do have to call the Master and check that a couple of colour substitutions will be okay. He seems like a pleasant guy and doesn’t sound like the Voldemort-esque figure that mainstream society likes to associate with his role. After chatting for a few minutes, he requests that she be sent home with two copies of the receipt because she is “hopeless with losing things and she needs to be re-trained with a firmer hand”. I consider sending her home with just one, knowing that he probably wants to use that as a reason for punishment. I get the feeling she wouldn’t mind this at all either. However, without knowing what their relationship is like I decide not to mess with them, even if I am possibly denying her some much-anticipated disciplinary action. I wonder how they got on that afternoon as I absent-mindedly start cracking the whips loudly in the store to fill some time.

Around lunchtime, an older couple in conservative clothing wander into my midst, where they pounce on the faux-latex outfits. They rack up over $300 adding to what is probably an overflowing fetish wardrobe at home, and throw in another couple of hundred dollars worth of toys. His eyes light up with eager anticipation and a slight look of desperation as she selects a metal buttplug with a bejewelled end, sternly telling him that it would be a special treat for him if he behaves this week. They seem really loving towards each other while still maintaining their chosen power-play roles. It’s a pleasant dynamic to witness.

That afternoon a gaggle of young women aged enter the store, looking for penis straws. On the way to the straws they get sidetracked for about 45 minutes, laughing and screaming at every single toy they come across. As they snicker at an 11 inch dong, one of them obnoxiously screeches “oh my god, do people actually use these?!!” I saunter over and fix her with a cool stare, replying “actually, I have that toy and it’s one of my favourites. If there wasn’t huge demand for everything in this store, we wouldn’t have this stuff on the shelves at all.” This is my standard line for when people are being narrow-minded about various toys we sell or minority fetishes we work hard to cater for. I believe I am doing them a massive favour by showing them a different perspective, encouraging them to think about the words that come out of their mouth in certain contexts and hopefully helping them see why they should broaden their definition of “normal”, lest they want to come across as a judgmental dickhead all their lives. I understand covering discomfort with laughter, but it can make other customers feel anxious about what may already be a nerve-wracking personal experience.

A gentleman that I had sold a steel cock ring to the previous week strolls into the store. I ask him how the cock ring had gone and he launches into how he had left it on too long and was then unable to get it off, so had to go into A&E to have it cut off. Aghast, I gently scold him for leaving it on so long (“it’s metal! It doesn’t stretch! I told you no longer than 10 minutes!”) I expect him to ask for a refund, but he insists with cheer that altogether it had been a great experience, and could he please have another the same (as the first one was destroyed by those pesky nurses in the hospital). I send him away with the new cock ring and a bunch of silicone based lube (“just in case”), shaking my head in wonder at the cavalier attitude he has towards the threat of painful dick mutilation.

My final customer that day is a sweet, frail little old man in his nineties. I show him a Fleshlight (fake vagina masturbating aid) and watch him grin in delight and poke his fingers into the tester, like a child prodding at a new pet puppy. He cannot contain his excitement about getting this toy, and the happiness is infectious. I give him a “senior’s discount” and he breaks out into a little jig-style dance at this happy news. It just goes to show that you still have a huge capacity to feel excitement, wonder, and happiness over fucking a synthetic vagina substitute well into your 90s, and this is probably one of the most beautiful conclusions I have ever come to.

A young guy comes in, looking rather bewildered at being there, like a deer caught wanking in headlights by his mum. He makes a beeline to the small bullet section and is poring over the various bullets in silence when I approach him to see if he needs help. He wants “the smallest bullet”. Ahhh, I get it. It’s for his butt of course - this is a common thing with the lads and I’m pretty good at identifying the culprits. I show him a few, and then ask point-blank, “Is it for yourself or for a female?” He goes red and stammers, “ahh, for a female”. Sensing blatant embarrassment, I reply gently, “no worries, we always ask guys that question because if the bullets are used rectally they’ll get sucked up there and have be removed at the hospital. The ones designed for anal have bases to prevent that happening.” Sheepish, he asks me if I could show him those ones instead. It never ceases to amaze me how embarrassed men get about basic anal play. Guys, you have an entire g-spot up there that your weird homophobia is straight-up cockblocking you from exploring. Just get involved and treat yo’self, precious boys.

Relaxed couples mosey in while they digest their delicious brunches and lunches from the cafes nearby. They appear content and loved up as they enjoy a slow browse through the store, holding hands and murmuring to each other about the toys. I try not to cramp their style. If it looks like “couple time”, often a hard state for people to achieve in their busy lives, I ain’t gonna fuck with the vibe!

I close up and happily drive home, knowing what I do is one of the more special and positive jobs of this society. Helping people connect with themselves and their partners on a respectful and safe sexual level leads to strengthened relationships, increased confidence and better self-esteem. We are encouraging people to feel good about themselves and their desires every day, and this can only be a favourable influence on the world!

Not all heroes wear capes.