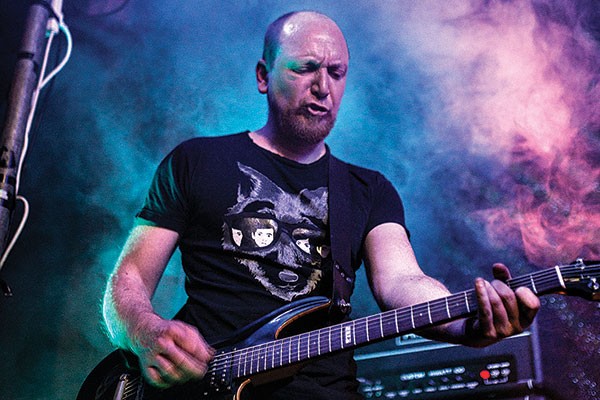 Dunedin’s best alternative music venue, Chick’s Hotel, is about to close. Mikayla Cahill pays homage to the venue, its history, and her memories.

Richard slammed his hand over the guitar strings and a ringing tore apart the room. Everyone began to cheer in unison. A second later the guitar riffs and sharp drum beats were ripping apart the walls. My hair whipped me in the face, and beer spilled out of my glass as I swayed side to side with the crowd. The disco ball above us spun around, shining flecks of light onto the faces of both strangers, and friends. The air smelled of hops and sweat. I grabbed my friend’s hand and we sang along as we danced with the masses. MALES said thank you and hung up their musical instruments for the very last time as they walked off of the stage.

Chick’s Hotel, an iconic Dunedin music venue is set to close by the end of March in 2016. It is hard to imagine that this once rowdy place will be an urban legend to those yet to discover the magic of Dunedin’s night life. The devastating rumours were confirmed in late November of last year by a Facebook post. Michael McLeod’s words shocked a community whose cultural centre has been at Chick’s. However, in a money run world like ours cultural wealth sometimes just isn’t enough to keep businesses alive.

Known across both Dunedin city and New Zealand, Chick’s Hotel was not once all the glitz and glamour it is today. Erected in 1876, the popular music venue used to be known as the Jerusalem Hotel. The building was commissioned by Henry Dench, a former mayor of the town. Like many people in today’s society, Dench ran into financial problems and was forced to sell the building in late 1878. A local carrier of Port Chalmers, George Chick, came along in 1879, and purchased the hotel – oblilvious he was creating a legacy that would be infamous over one hundred years later. George was an immigrant from England, much like the rest of the European population in the country at the time. He and his wife Helen birthed nine children, who lived with them in the hotel. Unfortunately, George had a bad stroke of luck with his off spring; of his nine children only three managed to reach adulthood and four of his nine children died in the hotel. Spooky, right? The gothic filtered life of George Chick ended in 1894, where his lamentable luck got the best of him. Chick was one of the 134 passengers to die on the horrific Wairarapa incident off of Great Barrier Island.

The spookyness doesn’t stop there either. Farfetched ghost stories of a basement dungeon and a tunnel that runs out to sea are still thrown around by some people to this day. Michael McLeod, the current co-owner of the venue, describes it as a “smuggling tunnel” where legend has it that those whom got a little too rowdy “might wake up the next day sort of halfway out to sea on board a fishing vessel enjoying [their] new career as a fisherman.” However, everyone can sleep in peace knowing this smugglers den is fully bricked up, and no longer in use. Despite these Victorian-like horror stories, the music venue has suceeded in creating a cultural explosion; one that will be missed by its subcultural community and local frequenters.

Robert Scott, musician in both The Clean and The Bats, says that “[Chick’s] wasn’t set up as a specific music venue but it was a pub that had music. Then Hazard took it over, put a lot of work into it, fixed it up, and hired a lot of bands.” Hector Hazard, a connoisseur of Dunedin’s unique and distinctive music culture scene, opened the venue in 2008. Before Hazard took over the bar Scott described it as being “very, very rough”. Hazard’s crusade of turning around the venue, and releasing its potential was founding factor in the role that Chick’s would play in the Dunedin music community.

By the early 2010’s Chicks Hotel had been sold once again to four co-owners: Michael McLeod, Thomas Bell, Morgan Oliver, and Jake Langley. It had also established a reputation not only as a popular music venue but as an iconic piece of Dunedin culture throughout New Zealand; with artists from all over the nation, including Anthony Tonnon wanting to perform in the mysterious and inviting venue. The venue draws a specific type of crowd; one that encompasses the eccentricity of Dunedin’s image, and sound, something Port Chalmers as a suburb also shares. Scott says that “lots of musicians and artists actually moved out here in the eighties because the housing was very cheap.” Even though Chick’s Hotel was not established as a music venue at the time, the location of these artists at the beginning of the internationally acclaimed ‘Dunedin Sound’ was centred within the suburbs of this small port town located 10 kilometres outside of the Dunedin city centre.

Regardless of its small size and the drive out of the city, Chick’s Hotel often pulls large amounts of people for gigs and special events. Why? Perhaps it makes us all feel closer to each other. Richard Ley-Hamilton, lead singer of Dunedin band MALES describes Chick’s as “a very intimate venue, you don’t need a massive amount of people to fill it up and have an incredible atmosphere.” Once a dark and rough hangout for sailors, the venue is now catered to an increasing group of individuals who enjoy the historic aspects of the intimate music venue. I have been fortunate enough to have never been denied entry but many are not so lucky. Some might not think that travelling on windy roads to attend a gig is worth it, but those people have clearly never been to Chick’s Hotel. Many of us Chick’s goers choose to travel on the Magic Chick’s Bus; a bus service run by the venue that charters its attendees both to the venue and back into the city for free with your Radio One card. An ingenious idea that enables Chick’s to stand out from other popular music venues in the city, the magic bus nearly came to a close in late 2013 until an online Pledge Me campaign and a birthday show enabled the current co-owners to buy their own bus rather than hire one for each gig; something that began to bring a lot more people into the venue after a year of reliable bus services.

A night at Chick’s – for me at least – almost always begins on that bus ride. There is something wonderful about waiting on the university steps with some of your best friends, going to see a band or two you all really like. That’s why Chick’s is my favourite place to go. The times at Chick’s that have formed life-long memories, friendships, and one or two regrets are what makes the venue so special. Other than the impeccable décor of the stage and the cosy, intimate setting of the bar and outdoor areas, Chick’s has a very homey atmosphere, and I think that’s why so many people become infatuated with it. A feeling that I think the building was destined to be stuck with: Michael McLeod spoke to Anthony Tonnon during a radio interview in 2014 and stated that “Some people often think that Chick’s refers to females, hot babes, ‘chicks’ or whatever, and that its some kind of groovy place for chicks to hangout, but it’s actually a family name.”

The warm and inviting venue has hosted a marvellous array of local, home-grown, and international artists since its opening as a venue in the late 2000’s. Over the last few years Chick’s has hosted some of the best acts to come to Dunedin in recent times including Princess Chelsea, Fazerdaze, HEAVY, Lou Barlow, DIE DIE DIE, Shellac, Anthony Tonnon, Trip Pony and Unknown Mortal Orchestra just to name a few. Not even a decade old, the Chick’s Hotel that we all know and love is coming to an end, and it is something to be sad about. Remember to also be happy though; realise that you participated in a distinctive part of Dunedin’s history. I would love nothing more than for Chick’s to stay open indefinitely and continue to let new memories and friendships blossom, but it isn’t just about what I want, it’s about something bigger than that.

Other than the demanding hours, and managing to put up with masses of intoxicated people, the hard working staff who work there want to move on with their lives. Just like anyone, or anything in the world, Chick’s cannot last forever. At first when I heard the iconic venue was closing I was angry, but, then I learnt something. Chick’s might have been wonderful for all of us, but it was a different story for those who saw the other side. For those whom make the spectacular of Chick’s possible there is both a lot of time and hard work involved, and one can only do so much. It is rude of us to expect Chick’s to stay open because we want it to, or to try and find reasons why having the venue stay open will be worth it in the long run. Yet as wonderful as those ideas may be, no matter how much dedication and spirit they may show, it is not what needs to happen now. Just like many other wonderful music venues in Dunedin that have shut down, such as Queens, Chick’s will leave its mark on the people of Dunedin, and be remembered by those who loved it. It is natural for things to come and go in life; we should remember Chick’s for what it was, what it is and what it has been throughout our lives, rather than just what it could be.

Goodbye Chick’s, we will miss you.