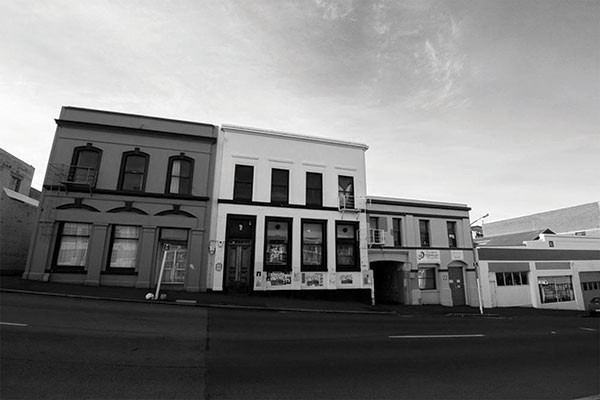 The Sound Of Dunedin's None Gallery

A short walk up Stafford, a street lined with disused warehouses and an old furniture distributor, one will find None Gallery. It is a residential studio and gallery complex that is a mainstay of Dunedin’s alternative sound subculture and independent arts. Often stylised as simply None, the artist-run collective has been a base of operations for local, national and international artists for twelve years and is home for a bunch of the unseen innovative and creative creatures who continue the tradition of Dunedin as a centre of rich musical talent and artistic ingenuity.

The building, where the collective began in 2003, was originally used as a pharmaceuticals factory and then a strip club. None is, as one of its longtime residents Brendan Philips puts it, simply a “building being put through its current use”. The building’s six massive bedrooms, several studios, L-shaped gallery, vast basement, tool-stocked workshops and storage rooms provide a space to both live and work. Its residents create, display and distribute their art using an array of analog and digital mediums, including drawing, painting, photography, sculpture and carpentry, film, lighting, screen-printing, clothing, electrical engineering and written word. And, of course, audio: the sounds of soothing post-punk, brutal walls of noise, robotic loops, banging hammers, jumpy grumpy guitars and synths of a gloomy Sunday. None’s first committee meetings decided that the space would be as undefined as possible, hence the name “None”. It has seen many artists come and go, and the space has adapted accordingly. Unemployed poets, ranting activists and intrepid photojournalists have inhabited its mammoth spaces. At one point, an Infoshop was tucked into the gallery to distribute left-leaning and anarchist literature. And, more recently, a couple of fashion students have set up shop.

I recently sat down for an interview with Brendan, who has been part of None since its 2003 inception. “We house events that don’t necessarily have a dollar value attached,” he explains, as opposed to some of Dunedin’s other venues and galleries that operate with a more commercial bent. “There’s a lot more structure and boxes to tick at other spaces around Dunedin and we wanted to have a place for those that might not otherwise find a space to do things. This was the founding idea.”

The collective’s continuous underlying philosophy has been its non-hierarchical structure, informal approach and ability to change with the circumstances. The gallery and its activities are as detached as possible from money and operate completely independently and with self-determination. In an essay titled Implications and Ideals of Artist Run Initiatives as an Alternative Economy of the Arts, Brendan says the ultimate goal of the None experiment is the practical application of a sustainable other way to run an art space, isolated from capitalist economics and in opposition to the neo-liberalisation and consumerism that are assaulting culture and the arts:

This refusal of definition and engagement with monetary concerns should not be seen as a denial of something as much as it is the pursuit of an Other. It is an attempt to find a different method of operation in terms of art production and consumption than that of established modes of the political economy of the arts.

Throughout history, art has been important in challenging dominant powers (ie. subverting authoritarian governments) and encouraging free, pluralistic and educated societies. Art helps us understand unfamiliar concepts, and the commodification of culture poses a threat to the integrity and influence of art. Rather than asking the question “What can I create with the money I have?”, artists at None operate with a do-it-yourself, zero-budget ethic. The musicians create their work using found audio tools: everyday sounds and the musical reverberations that nature emits and cities discard. The approach is at once pragmatic and idealistic. Effectively, any desire (or requirement) for profits is bypassed and the commodification of culture is resisted while, at the same time, alternative methods and theories are sought and tested.

These DIY “found sound” values are prevalent in the music produced by one of None’s residents, William Henry Meung (WHM), who uses compounded layers of bite-sized ambient loops. “My music comes from … I’m a real listener,” William explains. “I listen to the texture, the structure, the dynamics … and the emotiveness.”

William’s sound is minimalistic and has a simple improvised framework. The audience’s tastes and expectations of genre and convention are not always accommodated. At times his avant-garde tactics (the sudden and uncomfortable changes in rhythm or the distortion of bird song or the high-pitched screeching of signals in transmission) seem to reach a climax of musical taboo for some listeners. Despite a heavy reliance on chance, William’s sound is not the product of messing around and making a racket like a toddler on a sugar-high. His musical processes do have concrete aims and goals:

Pieces of sound … I identify with how they make me feel. I enjoy the process of trying to understand them. I try to emulate those feelings in my own music. It’s quite romantic, I guess, but it’s somehow empowering … when you find it.

Brendan has been making music under the moniker Grvdggr for the past ten years. The name originates from his former graveyard shift at Radio One, an institution of Dunedin’s sound.  Like None’s “refusal of definition”, Brendan says Grvdggr does not have a defined sound and has no one particular approach. He usually uses an electric guitar and, more recently, plays around with synths and digital effects on a dodgy laptop. There is a sort of sonic unity throughout his work that depends on the unexpected or random sounds from certain instruments at a certain moment, but he doesn’t deliberately dictate the similarities.

Brendan speculates that any ideological or symbolic message or meaning behind or within his music is created arbitrarily, “an instinctive process without any preconditioned form”. Any meaning is an existential reaction. “It’s basically making an ‘I am’ statement about negotiating the self and the world,” he said, adding that the statements aren’t imposed on his music, but are rather discovered through the music.

Unusual tools and instruments play a prominent role in Meung’s recordings and live sets, including homemade rudimentary oscillators, tick-tocking metronomes, captured bites from obscure Youtube videos, a kid’s toy drum machine and guitars being used in ways you didn’t think were possible. He grabs things, investigates them and, if it’s emotionally rewarding, goes with it, fitting the sounds in using some sort of hit-or-miss calculation.

At a recent gig at the Crown Hotel on Rattray Street, Meung placed a microphone on an old portable record player, which was repeatedly skipping on the first seconds of a song by Queen. The harsh, snapping, primitively percussive loop acted as the driving force behind his set. At times, purely by chance alone, the record player’s needle would skip a few grooves further into Freddie Mercury’s tenor and Meung’s set would harmoniously adjust, in what could be read as an accidental musical metaphor for how his home, None, has adapted to its different occupiers over the years and built on whatever (or whoever) comes along.

Brendan would agree with this analogy. There is a long tradition of improvisation and “making do” in Dunedin. “It’s about using the resources available. It’s about grabbing these building blocks and making something new,” Brendan tells me, “particularly in unexpected or incorrect ways.” Grvdggr has no defining sound or one exact approach, but, instead, he says his music is a “negotiation of chance” and a “practiced” improvisation. This also figures in Brendan’s painting, which he terms a “chance operation” where he’ll approach dripping paint in much the same way he uses the random variables of a guitar and its amplifier. But is he still in control of the music? Is his sound regulated? “It’s an intuitive kind of control, rather than imposing a form on the painting or the piece of music — it’s seeing what happens with the chance elements, and then directing them somewhere.”

Dunedin interconnected musical cliques and its small population mean that genres, styles and methods are frequently diversified, shared and interwoven. William, like many other locals, likens Dunedin to a village rather than a city. “You’ll find totally different types and characters at every gig. You know, the punks go to the noise gig and the noise people go to the punk gigs,” he says.

None resident Danny Brady’s band, Death and the Maiden, is an example of converging musical styles and processes. The three-piece has been influenced by genres such as house, pop and post-punk with each member bringing a unique skill and taste to the table. The band is also undeniably influenced by its particular milieu: None Gallery’s (and Dunedin’s) history and character. Hope (guitar & drums), Lucinda (bass & vocals) and Danny (synth & programming) have ingeniously injected hypnotic electronic pop and reliable rock genre structures with a dose of the city’s omnipresent winter and gothic atmosphere. Named after Norwegian painter Edvard Munch’s painting of the oft-depicted Renaissance motif, Death and the Maiden marries dancing innocent but also erotically striking pop norms (the maiden), with the impassioned and dark themes rooted in an artist’s environment (death). At the risk of being hyperbolic or overly macabre, it is intriguing how Death and the Maiden’s dreamy dance-floor bliss can also offer the sensation of a “dance with death” — cold winters, being on the dole, coming of age, heartbreaks, the tentative nature of youthful pleasures and general disillusionment.

An artist’s environment undoubtedly has an impact on his or her work. “There’s no way you can have [None] around you all the time [and it not] find its way into your own work,” Danny said in an interview with NZ Musician. Brendan agrees that Dunedin’s “aesthetic traces” can always been found in the city’s music and, for his own work, the history and character of None have been influential. In Dunedin it’s much easier to survive on little money and work in big spaces such as None, “something that’s not possible in Wellington or Auckland basically because real estate is so expensive there”.

As some nostalgically and obsessively look back at Dunedin’s heyday of sound and New Zealand’s Flying Nun era, an independent DIY experimental and alternative music community is thriving beneath the surface of the southern gothic village, while still (unsentimentally) taking cues from the student city’s past. None’s crowd is using the environment’s sounds, moods and symbols. It’s co-opting pop culture as counterculture, negotiating and directing chance, and adapting and improvising as circumstances dictate. It has implemented pragmatic ideals of an alternative economy and, with any luck, the art being created will continue to resist the commodification of culture.

Tags:   the sound of dunedin's none gall features