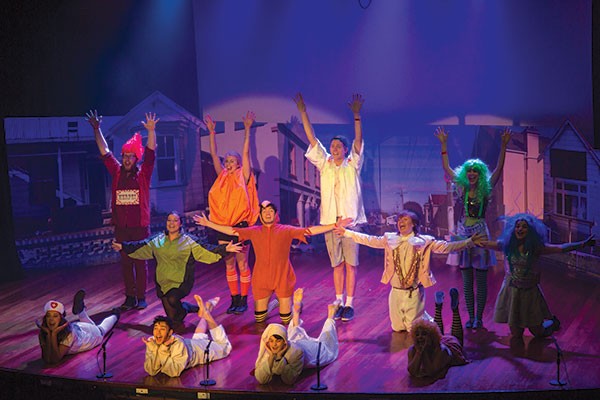 An inside look at what it’s like to be a part of the Capping Show, the process of getting into the production team and the build up to the grand performance.

“You’ve just woken up, and you realise the world is in slow motion,” says the director.

All right, I’ll play George Bush just doing his regular thing. That’s pretty funny. But I guess that’s been done before; maybe I should just make a character. Yeah, I’ll play a farmer who thinks his molasses supplies have broken loose. And I’ll call my wife Barb — yeah, that’s a funny name.
All right, go!

That was a take on one of the most nerve-wracking parts of the Capping Show audition process. There’s some dancing involved, some pair work, but the improvisation is the best part (for those sitting on the sideline).

“You’re a superhero whose arch-nemesis is the sun.”

Those are the instructions for the next student auditioning.

“You’re a man trying to get people to join your cult.”

You’ve got seconds to think of something funny, and you’re in front of more than 30 other people your age who think they’re funny too. You’ve got to be funnier. And you’re sweaty. Much sweatier than usual.

The main script for the Capping Show is usually written by someone outside the show. The other half, with all the side gags and cutaways, is written by the cast and another group of writers. Fourteen people act, 10 people are writers (who help write the side gags), five people are backstage and shift the sets for each scene, there’s your makeup artist, the costume designer, the set designer, the choreographer, the producers, the assistant producers, the directors, the audio technicians, the lighting peeps and the music group.

The whole thing kicks off with writing. You show up for three hours every night, grab a few mates, and start writing up something funny. I’m not very funny. I wrote a few good sketches (some even got into the script), but I also wrote a lot of shit. I think I wrote a sketch about a giant elephant that shows up throughout different scenes and just tells stupid elephant facts, and the punchline right at the end of the show was that her name was “Irrelephant”. It’s a good thing there’s a team there who make the cuts.

There’s also a Capping Show writers’ retreat. Sometime in the months before the show, all the actors and writers go off to an undisclosed location for a night. You get shitfaced, you write a bunch of comedy and you play party games. We created a game that whenever the song “Hide and Seek” by Imogen Heap started playing, the lights were turned off and everyone had to run and hide. I don’t know who was meant to start the search each time, but someone would.

For the parties, OUSA supplied us with a keg or two, a couple of boxes of wine and some non-alcoholic stuff. Most of the time someone would bring weed, and in my years it was usually the legal Thai High shit. But you’re still theatre kids. So you rock out to “Bohemian Rhapsody”, everyone gets drunk off three beers, and everyone is trying to get each other’s attention and make each other laugh.

There are often strange traditions at every party. At midnight, there is a weird eating challenge. I believe I once ate an entire can of raw baked beans but, even then, that pales in comparison to a guy who had to eat an entire orange (skin included). One of these parties was at my old flat on Howe Street, and there are probably still orange skin vomit remains behind the house. I’ve also got a video of some people eating a big raw potato and an entire banana — skin and all.

When I wrote and acted in the Capping Show, most people wrote good stuff, but there were a few that really stood out. A talented trio wrote a skit around Maui and the Son (not sun). At the writers’ retreat we were blown away by some of the best amateur comedy we had ever heard, and then about five hours later, we were all showing off some of our writing.

The retreat provides a space for everyone to write, perform and develop their comedy skills together. Once the writing is done, we hand in all our manuscripts. The writers leave us. The directors pick the best sketches, pick who plays them, and we start rehearsing.

The schedule for rehearsals was very strict, taking up at least three hours every night. You don’t miss a rehearsal. Typically it starts off with warmups, before you split into sketches and play around. Then you move onto harder rehearsals, in front of the directors, delivering your lines differently every time until you find something funny.

You work with lighting, sound effects, costumes and makeup until things start to come together. Your uni assignment due date whizzes by, and you fail by default.

Then it all comes around to show time. It’s hard to explain those precious, gorgeous hours before opening. You look outside the changing rooms and see a massive line of people wanting to see your work. It’s a wonderful feeling knowing that everybody in this room is as excited as you. You do the warmups where you bleat like sheep and make the sound of wheat fields (don’t forget, most of us are theatre students), you smash two cans of V, and you hear the hall outside fill with chatter.

It’s tradition to dance to the music on stage before curtains open, so it’ll probably be shaking about as we try to amp ourselves up. Energy is such a big thing and it has to beat nerves. The stage clears, the intro video plays and finishes. You’re bouncing on the spot to keep your energy high. People might be cheering — it depends on the crowd. The curtains rustle open, and you hear your cue. So much preparation, so much effort and so much time, but not just your time — that’s the thing. So many people have invested in this, in you; all these people are ingredients and the audience wants a slice of the cake you’re dishing up. Don’t drop it.

No one ever forgets their first laugh. It’s indescribable. It’s a wave of sound that brings you unequivocal happiness. It’s literally the best sound you could ask for in that situation.

Many different students have taken part in Otago’s famous Capping Show, contributing to the ever-changing, hilarious, skit-based comedy it’s known for. I sat down with some of the top dogs of the show and asked how they got involved. Alex Wilson has both directed and written the script for the show in previous years. Alex has a sharp wit and an excellent eye for what’s funny. Amber Hilton, a hilarious sweetheart, worked as backstage crew and tried her hand at writing last year. Ahmed Green has a perfect grasp on comedy, and played Jesus in Let There Be Capping Show as well as a myriad of others.

Alex: All the comedians (Monty Python, Eddie Izzard, etc) I looked up to as a kid had all learnt their craft from joining sketch comedy clubs at university. Capping Show was the closest thing to the Cambridge Footlights we had.

Amber: I first signed up as backstage because I thought one of the actors was cute … oh God, this is going in Critic!

Ahmed: I kind of signed up by accident because I thought people were putting their names down for free tickets to something and I hate missing out on free stuff.

What’s your favourite memory of the show?

Alex: I co-wrote a sketch that required our props master to painstakingly turn eight cardboard boxes into wearable WWII fighter planes. The cast would then wear these and perform a dogfight between two rival “cardboard-box plane clubs”. OUSA funded all of this.

Amber: My favourite memory is probably from closing night 2013 — after we clapped the audience out, everybody clambered onstage for a spontaneous dance party as the band played “Get Lucky” one final time.

Ahmed: Favourite memory of the show would be Tom Williams tucking his dick and ball sack between his legs in the wings, then turning around, bending over and showing us what he liked to call a “fruit bowl” just before we were about to go on.

Alex: There was a sketch called the wedding sketch because it was a sketch about a wedding. It was mainly about two people discussing if the Smurfs were mammals, the moistness of a gateau and whether the word urban was racist or not. A character turned up halfway through called “Piping Hot”. I like to think of it as the Waiting for Godot of student comedy.

Amber: Any of the ones where somebody strips to reveal a ridiculous outfit and starts to dance. Formulaic but iconic.

Ahmed: My favourite sketch would be the Maui and boy sketches; Grant Nagel is a genius writer and being with Tom on stage is genuinely one of the best life experiences you can have.

Can you describe how you felt on opening night?

Alex: You’re just buzzing — you have been committed to this cult-like comedy show for three months of your life and you have got to the point you no longer know if what you are performing is even funny. The directors have wound you up with some bizarre warmups they have just made up on the spot and you have been filled to the brim with whatever energy drink is sponsoring the show that year. You are bouncing off the walls and trying not to shit yourself from fear and diarrhoea. Then that first laugh just washes over you, 400 people all laughing in unison, and you know you are going to be okay.

Amber: Even though I was only backstage, I was nervous as heck that something would go horribly wrong, especially after seeing a sea of faces appear when the curtains opened up. But the moment we got that first set of laughs, I was riding on a high for the rest of the night.

Ahmed: Didn’t know what to expect on opening night. I felt like I was about to sit one of those tests that you can’t study for.

Do you think you’re a funny person?

Alex: I’d describe myself as funny in the same way I’d describe a clown crying and pissing himself in the middle of a public bathroom as funny.

Amber: Yes, but none of my Twitter followers seem to agree with me.

Ahmed: Yeah, of course, doesn’t everyone?