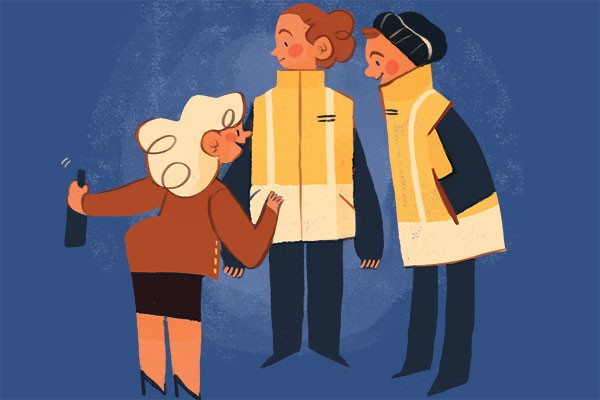 Donning a puffer jacket, grasping a thermos of hot chocolate for dear life and looking disconcertingly like a burnt marshmallow on legs, Olivia Collier set out on one of the coldest nights this week to search high and low for the best stories pertaining to our very own guardians of the night: Campus Watch.

I respect Campus Watch, I really do. I tried to hold a conversation with a drunk girl once while I was sober. It was the most excruciating chat I have had with anyone, ever. There’s only so many times you can reassure a person that the Justin/Selena split was for the best. Having been the drunk girl in this situation many a time, I know just how shit the chat can get. This is what makes the superhuman patience and restraint shown by patrollers so incredible. I kid you not, I’ve once yarned to one of these upstanding patrollers for a solid half hour on the merits of Matt Smith vs. David Tennant in one of the most in-depth discussions I’ve ever had about Doctor Who with someone who’d never seen the show. Not once in this half-hour-long saga was there a smirk or snarky comment. Nay, they treated every slurred word I spoke like it was the teachings of Socrates, and I thank them for that.

In addition to their superb chat (and many other services offered), Campus Watch also operate the affectionately nicknamed “Vomit Comet”: a beacon of hope (disguised as a car) that picks up individuals who have far overestimated their ability to sink drinks like a true Scarfie bro and gives them a lift back to their flat. Apparently, I myself was treated to a ride in the safety patrol two weeks ago, which I have no recollection of whatsoever, but thanks heaps, guys.

From all the stories I collected over the night, one thing was made pretty clear — Campus Watch are the cat’s pyjamas, so next time you see them, give them a smile and a wave (if you don’t already), because Campus Watch are both the heroes we deserve and the ones we need.

Stalking down the streets of North Dunedin, I looked for the students who looked like the cool “in the know” kids who seem to be connected to every awesome story you come across. Unfortunately it became clear pretty early on in the night that I was very much not cool enough for them to be seen talking to. So here are the other stories that I scraped from the bottom of the barrel instead.

“My best friend and drinking buddy would always stop and chat to Campus Watch every time we went to town. Don’t get me wrong, I like them and they’re cool and all, but I mean, she would ALWAYS stop and chat. Even in, like, the middle of winter, in the rain and wind, and we’re just wearing town dresses and thin jackets. One of the recurring things she’d always ask them is whether they were warm enough in their uniforms. They’d usually reassure her that everything was fleece-lined while I was freezing my fucking tits off.”

I see an approachable-looking lad outside a flat blasting the ever popular “Smoke Weed Everyday” remix by hip hop legends, Snoop (insert whatever animal name he’s using now) and Dr Dre (who does not actually appear to hold a doctorate). To build a rapport, I introduce myself and ask him, “So how good is weed, right?” He is startled and looks like a deer about to take flight; I have to assure him that I’m not with the cops.

“I used to have this perpetually high American flatmate who got really paranoid whenever he smoked. So one time he saw a Campus Watch patrol and freaked out. We told him they were the campus police whose main job was to catch out druggies. He completely fell for it, so from that day on, whenever we came across Campus Watch, me and the flatties would stop for a really long chat, just to watch him sweat. This one time was the best though; he tried to boost it away when he saw one of the cars slowing down near us, but he slammed face first into a pole, got a concussion and Campus Watch gave him a ride to the hospital.”

I lean against the red brick wall at the intersection of Dundas and Castle and light up a cigarette (purely to look more like an authentic journalist with hard-hitting questions). “So tell me” — the dude guzzling a SoGo down on the side of the street blinks up at me uncomprehendingly — “you got any stories for me about Campus Watch? I’m a reporter, you see.” I gaze off into the middle distance and offer him a drag of my virgin cigarette. Sitting down to let him know that I’m not going anywhere, I see defeat in his eyes as he takes another drag and tells me his tale.

“My flatmate got walked home by them one year — he showed up to the door with Campus Watch at about three in the morning covered in vomit and stinking like alcohol. Campus Watch told me that he saw my flatmate walking and could see that he’d had far too much to drink. The guy then gave us both a lecture about drinking too much and how it’s an issue; all while my flatmate took it all in ashamed silence … As it turns out, the vomit wasn’t his, but was from a girl he was with earlier in the night. He had walked her home and she puked all over him.”

My somewhat unwilling new friend is joined by two other friends, and I repeat the super-convincing ace-reporter act I gave to the first guy. Success.

“Most of them say hello to me even if it’s obvious I’m hammered.”

“I once told a Campus Watch officer that the best thing she could do for me was to cheer me on, since I was in a red card and losing miserably at a skulling challenge. The punishment for losing was way more alcohol than I could handle so I legit begged her to encourage me, and after a bit of apprehension she did. She got really into it (after much persuasion) and I ended up rallying for a second-place finish.”

I start yarning to a friend I see chilling out on one of the lawns on Castle Street. We talk about the quality of the grass on this lawn and agree that it is good. She tells me some stories over a lukewarm can of SoGo while I’m sitting on the wet grass. The things I do for Critic.

“My old neighbour called Campus Watch one night and told them that she needed hugs. The next day her flat had two officers come by to check that ‘the Irish girl who needed hugs’ had been checked in on by her flatmates. They got chatting and they would stop by from time to time for a hot cup of tea. I think they’re still friends on Facebook.”

“Earlier this year I had a massive spider in my room and out of six flatmates none of us were prepared to deal with it. So we were just doing the classic freak-out thing where we were screaming and just generally being terrified, when a Campus Watch officer pops his head through the window and asks if we need any help. This freaking boss of a man slides the spider into an empty wine glass and releases it back into nature like it ain’t no thang. That’s who I want to be when I grow up.”

Walking down the street with my second unlit cigarette in my mouth, I make eye contact with a girl sitting on a doorstep and she gives me a questioning look. I decide that honesty is the best policy, so I tell her I’m using it as a prop to look edgy. She tries to assure me that I look cool.

“I’d just gotten to town once and I met up with my friend who straightaway told me that she wanted to be ‘the night’. I tried to get her to tell me what she meant by that, but all she would do is whisper quotes from Batman at me. She did do a really good impression though; Christian Bale would be proud. You know, if he wasn’t such a dick. Anyway, so she decides that we’re going to explore the back alleys of George Street. She had dragged me down a few alleys by the time we came across a Campus Watch guy. He was very concerned for our safety since we were wandering through some dodgy places, and now my friend decides that she’s not Batman anymore. She tells him we’ve only been back there for a minute, just while I was throwing up. So I’m staring daggers at her (I was not throwing up) and this lovely guy offers to get us a ride home in the Vomit Comet, since I’m apparently too drunk. The car pulls up and my friend spots some of her other mates. She gives me a hug, tucks me into the car and heads off back into town, while I get driven home almost sober after 20 minutes in town.”

I am invited off the street to do a beer bong by some people I vaguely recognise from a party last weekend. I absolutely crush it.

“There have been countless times where we’ve had Campus Watch walk into the complex and hold up a beer bong for us. The ultimate GCs.”

“I’ve always had pretty good experiences with Campus Watch, really. Except for this one time I had to be forcibly removed from the main library. I’m not proud of that. The dude that escorted me out was pretty chill though.”

Walking down Leith Street later in the night, I come across two lads dragging a couple of road cones down the street. I stop for a chat and ask what their plan is for the cones. They look at me, stumped, and confess that they hadn’t really thought things that far through.

“My worst interaction was probably when Campus Watch walked me home naked in the snow. Suddenly telling them that I was eye-browsed to do it didn’t seem like such a legit excuse.”

“Once I punched a window and got glass all through my hand. Now, I’m not one to give up on a night out until I am definitely 100% not able to go out. So I stuck my hand in a warm bowl of water and asked my flatmate to pull out the glass. We were doing this outside and a Campus Watch chick came up to us. She offered to hold my hand while he was doing it, and fuck being macho — I hung onto her hand for dear fucking life.”

Should you ever need to get hold of Campus Watch, either cause shit is going down, you need a ride home or you’re just not getting enough hugs, their number is 0800 479 5000.