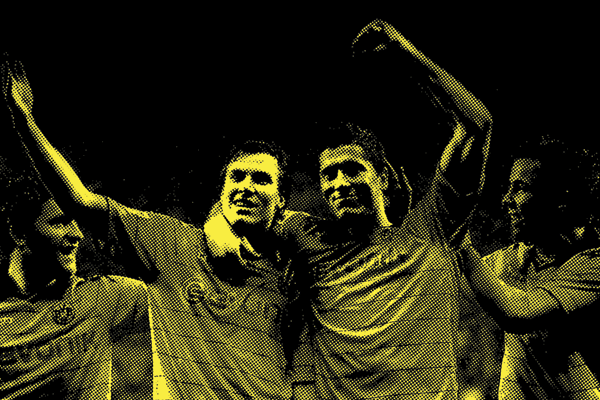 May the sports be with you

On 25 May (6:45am 26 May NZ time), Europe’s top two sides will battle for the most prestigious prize in club football: the Champions League title. Borussia Dortmund and Bayern Munich are both in the final at Wembley after pulling off semi-final upsets – Dortmund saw off nine-time winners Real Madrid while Bayern thrashed favourites Barcelona – but both thoroughly deserve their places. Gus Gawn and Sam McChesney give the lowdown on both clubs.

The Rebel Alliance
by Gus Gawn

Borussia Dortmund has to win the Champions League final because it is their last chance to do so. Shortly after the game, their team will be dismantled and repurposed as the Bayern Munich development squad. The red revolution doesn’t stop there. After 25 May, the Bundesliga will be renamed “The Bayern Munichsliga” in which every team is Bayern Munich. All the fans will support Bayern Munich and all the games will be played at the Allianz Arena with the red lights on.

In the business world, this process is called “consolidation,” and over the last couple of years, Bayern Munich has consolidated all the available good players into their own squad. Bayern Munich is an evil corporation hell-bent on making the Bundesliga the most Germanically efficient football competition in the world. There will be no room for uncertainty or surprise. If there is only one team, then the right team always wins. All other teams will be ruthlessly absorbed. I have renamed 25 May the Night of the Long Knives.

Right now, Borussia Dortmund (BVB) is the best feeder club in Germany. Mario Götze and Robert Lewandowski are the two main reasons that BVB is in the final, and guess what? They will both almost certainly be wearing red instead of yellow next year. The €31 million buyout clause in Götze’s contract has already been activated. BVB needs to sell Lewandowski before his contract runs out or they lose him for nothing next season. At least they can feel a little better knowing that Bayern will be getting him at the peak of his value. He has never been in better goal-scoring form than he is right now and interest from across the Channel means he will cost a small fortune this summer.

The path BVB has taken to get to the Champions League Final is remarkable. In 2004, the club was on the verge of bankruptcy. Without a sizeable loan from Bayern Munich, they would have been unable to pay their players and probably would have folded. From that low point, they built a fantastic team around players from their development system alongside smart and cheap transfers from Germany or nearby.

The core of the team is young and German. Their coach, Jürgen Klopp, has them playing fast, possession-based football with a rotating cast of versatile attackers working off Lewandowski up front. Götze, Kevin Grosskreutz, and Marco Reus are all creative, fluid players and Lewandowski is in the form of his life, smashing four past Real Madrid in the first leg of their semi-final. They are a good watch.

Dortmund has been the best side in Germany for the last two seasons. They won back-to-back titles until the evil empire reclaimed the throne this season. However, they have had trouble holding onto their best players. Shinji Kagawa was sold to Manchester United, and Lucas Barrios chased the yuan with the Guangzhou Evergrande. Reus was bought in for €17 million to cover the gaps.

Dortmund itself is not an especially large city, but the club has a huge following. The Westfalonstadion seats 80,000 people in a city of only 500,000. That is the equivalent of Eden Park seating 220,000 and the Blues filling it every week. Dortmund is a feel-good club.

Bayern Munich is going to win the Champions League this year. I love supporting the underdog and Borussia Dortmund is definitely that, but Munich has too many superstars in excellent form to lose. Dortmund will probably play the better game, but I can’t see them breaking down the impenetrable defence that shut out Barcelona across two legs. Bayern will be too ruthless and will win by two or three to nil. They probably won’t even crack a smile.

As a side note, a literal translation of the name “Schweinsteiger” is “lover of pigs,” so there’s that as well.


The Evil Empire
by Sam McChesney

Since 2008, FC Barcelona has been unquestionably the best football team in the world. Some suggested they were the best in history; at their peak they were totally unstoppable, and most people haven’t waited for hindsight to declare Lionel Messi the greatest player ever.

On 24 April, Bayern Munich beat them 4-0 at the Allianz Arena. Two weeks later, Bayern went to Barcelona’s home ground, Camp Nou, and won 3-0. Bayern is the new best team in the world.

Bayern Munich is Germany’s most prestigious and successful club. In its 113-year history, they have won a record 23 league titles as well as 15 cups and four Champions Leagues, and have been home to legendary players like Franz Beckenbauer, Gerd Müller and Lothar Matthaus. The current squad isn’t bad either, featuring a ridiculously solid defence (only 15 league goals conceded this season) and an attacking contingent with varied and complementary talents – the dribblers (Arjen Robben and Franck Ribery), the creator (Bastian Schweinsteiger), the “interpreter of space” (Thomas Müller) and the finisher (Mario Gómez).

They are also rich. Very, very rich. Unlike other rich clubs, though, they don’t do stupid things with their money. Some clubs spend £35 million on Andy Carroll, or £20 million on Ashley Young (last seen taking over the streets on HBO’s The Wire). Bayern have used their wealth to assemble one of the most skilful, ruthlessly effective squads ever, with recent defensive signings Dante and Javi Martínez proving inspired. With former Barcelona manager Pep Guardiola coming on board after Jupp Heynckes retires, Bayern could be unstoppable next season.

Reaching the Champions League final is more than just a triumph for Bayern and Dortmund, their opponents. It is a triumph for German football. In stereotypically Teutonic fashion, the Bundesliga is a sensible, bureaucratically-guided competition that has not only levelled the playing field but also restored the national team to its former position among the world’s elite.

England’s anarchic Premier League, in which billionaire club owners splash their cash on foreign players rather than developing local talent, has left the national team shallow and weak. Meanwhile, Spain’s recent international success has been build almost entirely on Barcelona’s youth academy, La Masia, while La Liga has regressed into a boring duopoly.

Over the last decade, the Bundesliga, in conjunction with the German football association (DFB), has poured over €700 million into youth development and coaching. Germany now boasts a young and exciting national side, which will only improve over the coming years. Its international players are not highly-paid club bench-warmers, as with England, squabbling mercenaries (France), or clanking geriatrics (Italy). The prospect of an epic showdown with Spain at the next World Cup has football fans everywhere salivating.

Anyway, back to Bayern. The suggestion that the club is a malevolent bully is unfair. Of course, they are Germany’s richest club, and will naturally look to attract top players. But they do not simply cream the best talent from their rivals, à la Real Madrid or Manchester United; the core of the side (Philipp Lahm, Schweinsteiger, Müller, Toni Kroos) came through the club’s own youth system.

Nor will the club’s purchases of Mario Götze and (possibly) Robert Lewandowski spell the end for the Bundesliga as a competitive entity. Dortmund has been shedding top players for several seasons now but keep bouncing back, and there are plenty of other strong sides (particularly Schalke 04 and Bayer Leverkusen) to keep Bayern busy. Unlike La Liga and the Premier League, there is not a huge, unbridgeable gulf between the teams at the top and those at the bottom. Although Bayern has been dominant this season, the German league’s newfound ability to churn out fresh young talent means that any long-term spell of dominance is simply impossible to predict. Like Gus, I’ll be cheering for Dortmund; unlike Gus, I’m not a hater.

As for the final itself, Bayern will win 2-1 with an 85th-minute Gómez tap-in.