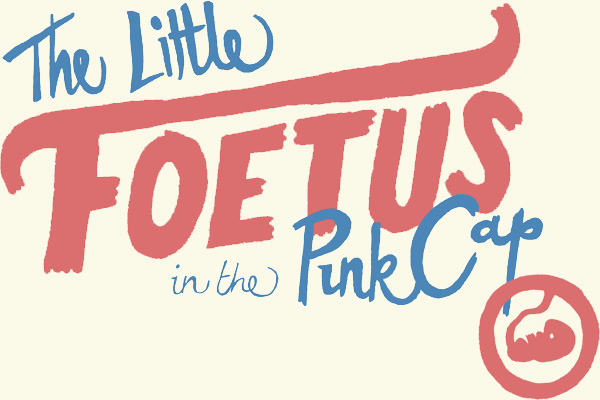 The Little Foetus in the Pink Cap

A Parable for Children

Earlier this year, a series of photos were posted on Reddit showing a woman holding a stillborn male foetus in her arms. The foetus was dressed in a pink knitted cap. This is his story. (See the foetus at critic.co.nz/NSFWfoetus – if you dare.)

Once upon a time in the small hamlet of Gore
Lived the happiest couple Southland ever saw.
Mummy and Daddy and several thousand sheep
For Daddy to fuck after Mummy went to sleep.

Daddy toiled on the farm with his flock all day
Mummy stayed in the house and read 50 Shades of Grey.
They were content, but something was missing
Something more than Daddy’s inexcusably poor aim when pissing.

One day as Mummy hung out her husband’s Swanndri to dry
And he slouched on the couch watching the rugby on Sky
She realised that she couldn’t wait any longer for what she desired
She wanted a baby; she needed a child.

So she marched inside and told her husband so
He sipped his Speights, grunted, and flexed his big toe
The suspense grew as he farted while picking at his athlete’s foot
Then at last he mumbled, “Alright. Get out ya mut.”

Eight months later, Mummy was gripped with fear about her wee bub
She hadn’t felt a kick since the other day at the pub.
She drove the ute all the way to the hospital in the Big City
Oblivious to the students gazing at her exposed tramp stamp with pity.

After a wait in which she read NW and applied Britney Spears perfume,
Mummy was welcomed into the ultrasound room.
As she laid in the chair, stinking of magnolia, nose running, legs spread
The nurse coldly delivered the news: the baby was dead.

Mummy sat in the chair with a face of stone
Consumed with regret at that last crazy night at Brimstone
Perhaps if she’d drunk only nineteen Woodies that night instead of twenty-five
Her precious wee bub would still be alive.

But the nightmare was not over; it had barely begun
Mummy still had to endure the birth of a limp lifeless son
She nervously wiped a lump of congealed snot onto the hospital bed
And called Daddy to break the news about his baby codehead.

The moment he heard Daddy extricated his cock from his favourite ewe
And vowed that he would be there for the stillbirth too
He powered up the Altezza and drove to Dunedin even quicker
Than he could power through a 40 of his favourite brown liquor.

Daddy arrived just in time to watch Mummy give a final push
A lump of beef jerky emerged from her bush.
The nurse extricated the jerky from its mucousy puddle
And handed the hideous mass to its parents to cuddle.

As the couple lay in the bed cradling their unborn son
They wept even harder than they did that year the Blues won.
In a final tender gesture before the jerky would be thrown in the bin
The nurse produced a gift from the mums of the city mission.

It was the teeniest, tiniest, thimble-sized pink knitted cap
Perfect for the thumbprint-sized skull of a lump of slaughterhouse scrap.
The nurse gently placed the cap on the foetus’ marrowy head
And! Lazarus-like, it re-animated, and rose from the dead.

Armed with the superpowers conferred by its cap of pale-pink
The foetus leapt up, stretched its limbs, and gave the room a roguish wink
As the nurse, Mummy, and Daddy reared back with a jerk
The foetus minced from the ward with an insouciant smirk.

The little foetus bounced from the hospital in a state of unabashed bliss
Relishing the fresh sou’wester on its raw carapace
Knowing that around every corner of this fair city lay untapped treasure:
Endless wacky adventures, and limitless pleasure.

The acrid stench of burnt coffee seemed to say to the foetus, “Head north!”
Along the depressing cul-de-sac of Cumberland St he set forth
But the wind chilled him through the holes in his loose-knitted cap
So he rapped on the door of the nearest Castle St flat.

A boy in tapered drawstring pants answered the door in a rush of steaze
(He dressed to the left, the foetus observed with a sense of dis-ease)
The boy’s brow was sweaty, his pupils dilated
His nose clogged with pink powder, his ego inflated.

The foetus gazed into the hovel with marvel and wonder
It had all the exotic appeal of a Rio de Janeiro favela
Upon a plate rested three lines of poorly racked pale-pink pill
And next to it a rolled-up Maccas receipt (no one had a bill).

The pants told the foetus to chill on a tiny bare spot on the floor
And racked him up a rail to welcome him still more
The little foetus snorted the line with unabashed greed
And in the spirit of YOLO, followed it up with some weed.

Now that he was in a mental state truly worthy of his pink knitted cap
The foetus cemented his new friendship with this freshest of flats
By sprinkling each sentence with the words “fuck”, “bro”, and “cunt”:
He elicited the elusive, approving Castle bro grunt.

Spurred on by his acceptance into this enclave of fine single-malt
The little foetus asked his new #lads, polite to a fault:
“So, if I pay all of you cunts 50 bucks
Will you teach me how to be the ultimate skux?”

The elegant request immediately transformed the room:
The lads emerged from the sweet embrace of their greened-out tomb
And immediately sprang into action, scouring the floors of the flat
For the perfect chinos and tee to complement the foetus’ “fresh 2 death” hat.

The foetus’ legs were so disproportionately short in their beige cotton drill
That the boys assured him he was certain to pull.
To that end, they wandered south to a place called “The Monkey Bar”
Amping by pissing in gardens and snapping windscreen wipers off cars.

The foetus revelled in every moment: The sights and the smells! What a world!
A puddle of vomit here! A smashed glass there! And o! The girls!
As they waited in line, the cool sou’wester caressed his bare ankle-skin
The bouncer glanced at his ID (DOB: today) and waved him on in.

The foetus strolled onto the D-floor with his bros, high as fuck and skux as shit
Soaking up the abundance of exposed vag and tit
Never in all those dark months in the womb
Had he imagined that so many sluzzas would appear drunk in one room.

The chinos and print tee did their job, just as the bros said:
After a mere twenty rejections, a solid four invited the foetus back to her bed.
(Though sadly when, en route home, the foetus stopped to pee
The street lights revealed that the four was really more of a three.)

To distract himself, the foetus asked if the girl’s flat was near
She replied, “I’m at Studholme.” He was overwhelmed with an inexplicable fear.
But that could just have been the fact that he was sobering up
And his haul increasingly resembled a drunk walrus pup.

So he ploughed on, and once they got back he ploughed in
The girl was as animated in bed as a baked bean tin
So he thought instead of that curvaceous Kim K his mum told him so much about
During those eight terrible months of intra-uterine drought.

After this most average of roots, post-coital malaise set in
And the foetal alcohol syndrome really started to kick in
Trying not to vom, the foetus extricated himself from the bed
And crept stealthily away from the snoring pinniped.

As the little foetus in the pink knitted cap stepped outside
He felt that strange intermingling of self-loathing and pride
Sprinkled with a touch of abject depression and a little elation
That is the hallmark of the root born of pure desperation.

Despite his depression, though, he remembered the words of the #lads:
To go home after rooting one chick in a night is for fags.
But as he began to walk, from the starry firmament a plastic bag fell!
It contained some kind of raw meat, judging by the blood and foul smell.

The foetus listlessly opened the bag with vague malcontent –
How was he to predict the sheer glory of its content?
Within lay the cougar of his dreams, a womanly nine months old
O! Her lush feminine curves were a sight to behold!

Yet-to-dry toilet water gave her skin a beautiful sheen
Remnants of afterbirth lent her visage flashes of ruby and citrine
A tuft of luxurious dark hair sat atop her head
And her dark almond-shaped eyes seemed to say, “Come to bed.”

But what was this? She appeared to be ill –
Her beautiful eyes were half-closed; she was eerily still
Was it possible that…? No! He could hardly bear to think –
Her mother had flushed her then flung her in a fit of vicious pique?

The little foetus in the pink knitted cap howled at the moon
Why did Yahweh insist on taking the good ones so soon?
Still, better to have loved and lost than to never have loved
He sadly doffed his pink knitted cap and farewelled his beloved.

The foetus fled the terrifying Studholme grounds in despair
He tired of wacky adventures; he wanted to disappear
In a state of all-encompassing existential self-pity
He trudged through the grey dawn of this terrible city.

How could he now live up to the promise of his wee knitted cap?
He could barely muster the energy to head back to the flat.
Dunedin had rendered his ankles breezy; his stomach queasy; his soul stricken
There was only one thing to do. He went to Willowbank for fried chicken.

But when he asked for chicken, and an Ultimate Burger
The boy behind the counter seemed not to hear; he’d have to reorder
He leapt up on the counter to make his voice heard –
Sadly, to a sleep-deprived fry cook, a foetus looks not unlike a dead bird.

And thus the courageous wee foetus met his deep-fried demise
But he did not die for naught: long will he colour our lives
His cap sits on the register at Willowbank, reminding us that Dunedin is a place
Of totes wacky adventures, dead babies, and utter disgrace.

Ask yourself, what would the little foetus in the pink knitted cap do?
And have courage, for a little bit of the foetus lives on inside you.
(You probably think that’s some kind of profound metaphor –
It’s not. The Willowbank oil was last changed in ‘04).
This article first appeared in Issue 7, 2013.
Posted 5:49pm Sunday 14th April 2013 by Anonymous.