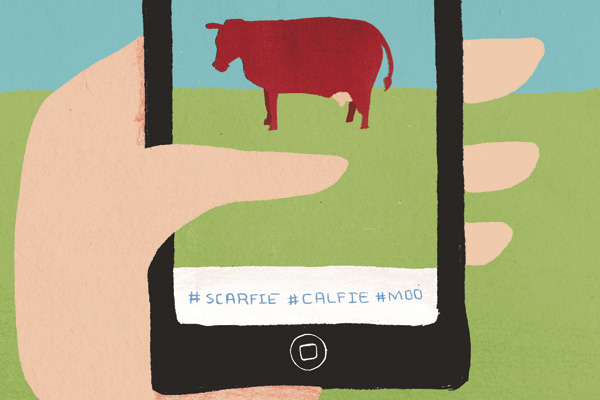 Where the fuck is the city? I whispered to myself as the airplane landed in a patchwork of green and yellow fields. Were we still in New Zealand? How much more land can there be south of the Bombay hills? Was Kim Jong-un actually the world’s sexiest man? Questions filled my head. While I panicked and scavenged my Miu Miu carry-on for a Valium or five, no one else seemed worried. One big-breasted pigeon, wrapped in a turquoise North Face fleece, even attempted conversation with me. I stared hard outside the window, ignoring her.

I followed the crowd down the airplane stairs. A prevailing stench of manure and hay overwhelmed me. A tall, blond haired boy behind me laughed at my coughing. How embarrassment. I walked quickly along the faded, blue line that led to the airport’s sliding doors. Goosebumps deformed my tan as a chill wind swept across the tarmac. I wasn’t in Omaha anymore.

Inside the airport was a sign welcoming travellers to Dunedin. Dominating the sign was a scene of smacked-up purple Cadbury workers in a world made of chocolate. I wasn’t sure if it meant the drugs were good here and like everyone was Maori, or the whole thing was some cynical joke about what you can’t find in Dunedin. However, I still took a quick selfie in front of the sign for my Instagram
#gpoy #scarfie #girl #hot.

Mum: don’t 4get to give ur friends the lamingtons I bought u.

Me: aww what lamingtons? U r trying to make me fat!!

Mum: the ones from Freds, I picked them up this morning! I put them in ur suitcase. Talk soon darling – it’s mah-jong night w the girls. YOLO.

Like being the third girl to turn up at a party in the same Ruby dress, this Dunedin experience already seemed a disaster. I felt worse than the time Mum got filmed flashing her boobs at a Rod Stewart concert. I contemplated catching the next flight home. Perhaps things had changed since Dad went here.

I walked over to the chubby man holding a whiteboard with my misspelt name scrawled on it. Sensing my hesitancy, he assured me I was in the right place, where apparently even the drivers were white.
I followed his directions to the shuttle and waited for the last people – one of whom was the tall blond who had laughed at me before.

Although the shuttle was filled, nobody talked for most of the trip except the blond and his friend. My ears perked up when I heard him say he had been skiing chutes in Aspen, Colorado for the holiday break. I made a mental note to suss him out when either he or I got out of the shuttle.

The two plebeians in my row avoided all eye contact, and the large person next to me spent the entire time squeezing in her right thigh to avoid it touching me. Her avoidance somehow created a sexualised awkwardness between us and I too began avoiding her thigh. Five minutes into the journey, a girl at the back of the shuttle exploded in great sobs. I was sure the fatty next to me used the wailing as a cover to let out a toxic smell. Her personal miasma merged with the manure stench that had flooded through the air conditioning. A cough sounded, then everything went painfully silent. My attention drifted to some cows in a passing field. Instagram beckoned
#cows #moo #field #scarfie #calfie.

Sarah: BABE! WHERE THE FUCK R U. OMG. I HAVE LINDAUER 4 u! Mum & Dad bought it 4 us Dunedin girls!!! Haha the boys are doing scrumpy hands. OMG 7 day bender time.

The shuttle got closer to a line of buildings similar to the strips of state houses back home. Was this it? Was this the home of the blue and yellow Scarfies? A bead of perspiration formed on my forehead. The shuttle approached a large, white homage to the Hollywood sign. It read “Mosgiel.” Wait - what was Mosgiel even? A fertiliser or something?

Further along the journey, the shuttle drove through a large residential area that spread down the hill ending in a large pool of suburbs. The houses lining the road had little brick walls and buzz cut lawns that closely resembled my last French Landing Strip wax. Each home was a replica of my distant uncle’s home in Hamilton.

Me: Oh my gosh u dick I’m in dunedin!

Karen Walker Text Alert: 2013 Summer Sales in all Auckland stores. Up to 30% off the Hi There line and 15% off Mainline and Runaway lines.

The KW alert made me realise the worst – I had seen no Karen Walker stores as we drove down the main (and only) shopping street. In disbelief, I pinched a wad of fat from the girl’s muffin top beside me. She looked at me with wide-eyed panic and pulled her Kathmandu jacket over her waist – squirming like a huhu grub in a sleeping bag. I don’t think she registered the controversy. There was no Karen Walker, not even a mere Kate Sylvester or Suprette. I would have to live online. Did Dunedin even have internet? Oh Lord, I would probably need a landline. Before I knew it I’d be wearing red Mary Janes, wondering whether my husband would buy me a Hoover for Christmas.

What the fuck was I doing here anyway? I know basically nobody, the place has shit weather and I basically chose all my papers with my eyes closed. Maybe I should have taken up that job at The Department Store. Fuuuck. The wailer at the back of the shuttle started up again. I felt like joining her.

Dad: Hi honey. How is Dunedin? Ur mother is worried about u. Also she wants to know if u have given ur friends the lamingtons.

Dad: Don’t worry u will love it. It just takes some time. Call me if u need me ok darling?

Impossibly quickly, we left Dunedin’s shopping centre. It was dark now. Slowly I noticed that the street names all seemed familiar. I thought about my trip to Scotland a few years ago and suddenly realised Dunedin’s street names were the same as Edinburgh’s – the similarity went right down to placement of the streets themselves. Thank goodness irony is in, I thought as I pushed my black, lenseless glasses further up my nose. I pulled my phone up to my face for another quick Instagram.
#salty #gb #ilove1D #harrystyles
After passing a range of fast food places (um – where was my “Little and Friday” or “Sabatos”?), the shuttle turned at a set of traffic lights and proceeded to drive up the hill. We pulled into a driveway towards a towering complex of brick buildings with intermittently lit rooms, strangely akin to Hogwarts. There were two of us left now – me and Aspen boy. When Aspen boy didn’t get up to leave, I realised it was my stop. I tumbled out of the shuttle and stood watching the driver retrieve my luggage. In the boot was Aspen boy’s luggage: an enormous box of (presumably homemade) cheese rolls – how naff – and a nondescript black bag with a small, disappointing Kathmandu label. I realised I had been holding my breath, hoping for this boy to be christened with some sort of status. Then I read the address tag attached to his bag – “Wanaka.”

As the driver tugged at my suitcases, Aspen boy turned South Island boy got out to help. A warm wave passed through me and ended deep in my groin as his hand accidentally touched mine. I asked him if he was wearing a Burberry coat – he wasn’t sure, it was just something his dad gave him. His naivety had me smitten. I felt like Uptown Girl and her backstreet Billy Joel – society said no but the electricity between Aspen/farmer boy and I said something stunningly different.

As I wheeled my suitcases across the concrete square with the surrounding brick buildings and picnic tables, I clutched my iPhone, which now held Trev’s number, to my chest. I didn’t really get Avril Lavigne’s Sk8er Boi song when I was a tween. But now I totally got it. I’m not going to have any problem with his baggy clothes. And maybe that’s the difference between pride and prejudice? LOL JK, Marketing 101 here I come.
This article first appeared in Issue 1, 2013.
Posted 9:40pm Sunday 24th February 2013 by Loulou Callister-Baker.