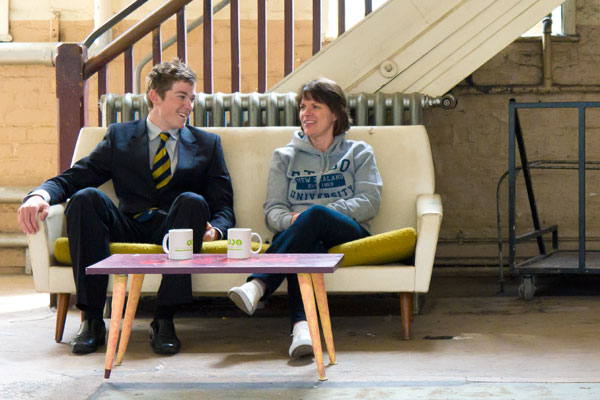 OUSA and the Uni get it on…

The University and OUSA have forged a new relationship to counteract the threat of the VSM legislation. From now on, the University is going to take your money, and then give it to OUSA for you. Critic’s Callum Fredric investigates the ins and outs of this budding romance.

For as long as anyone around here can remember, war has raged between the University and the Otago University Students’ Association (OUSA). When the Uni raised its fees in 1993, OUSA activists occupied the Clocktower building. And they did it properly too, getting smacked with riot police batons for their trouble, unlike the wimps recently camping in the Octagon. OUSA also didn’t take kindly to the Uni’s introduction of a student Code of Conduct, which allowed the Uni to punish students who broke the law in their own spare time – they took the Uni to court. But times have changed. Under the regimes of OUSA President Logan Edgar and new Vice-Chancellor Harlene Hayne, OUSA and the Uni have become BFFs. In slightly more technical terms, they’ve signed a Service Levy Agreement (SLA) whereby the University will fund OUSA for the whole of 2012, and possibly beyond.

For all the freshers on the block, here’s some history. In 2011, the Government passed the Voluntary Student Membership Act (VSM), meaning membership of all students’ associations is now voluntary. Without compulsory membership, OUSA was facing a huge drop in members and therefore revenue. Initially, OUSA resigned itself to passing a “black budget”, with significant cuts to its services and spending – but in December, the Uni and OUSA made a last-minute deal. Under the SLA, (Students Love Acronyms), OUSA will get basically the same amount of money as last year, except this time OUSA has zero fees – the Uni collects the money from students and passes it on to OUSA, thus nimbly sidestepping the VSM legislation. And what the hell does this all mean for your average student you ask?

The Gospel according to Logan Edgar

Critic sat down on the classy new executive couches for a chat with OUSA President Logan Edgar about the SLA. After a brief discussion as to whether the conversation was to be a yarn or a sharn, the slightly more formal “yarn” was chosen due to the statistics and charts being referred to. First elected in June 2011, Edgar knew that the VSM bill would almost certainly be passed into law, and he was expecting to have to make some tough financial decisions. “When it was just me handling it, blindly just come into power… I was just going for the old your-mate-JK [John Key] big fucking asset sales, it was all go as we saw with Radio One” (which Edgar considered selling off in 2011). But just when all looked bleak for OUSA, “lo and behold this wonderful new VC has come to the party and helped out good old OUSA.”

“The SLA was the University recognising that the services we provide are crucial to this vibrant unique Otago University experience and hence why they’ve come to the party and contracted our services.” The next step was to take the proposed agreement to the University Council to see how much was in the “honeypot” for OUSA. As it turned out, there was a lot of honey. In 2012, OUSA will be receiving roughly the same amount as in 2011 (around $190 per student), and providing similar services. Theoretically, if the Uni thinks OUSA is doing a bad job of providing services, the Uni could cancel the contract with OUSA and get another company to provide the services, or cancel the services altogether. However, Edgar suggests that the supposed threat of the Uni going elsewhere is emptier than the Highlanders’ trophy cabinet: “It’s gonna be ongoing…. we’d have to be pretty shit for them to leave us in the dark for next year.” The Vice Chancellor was less certain: “First of all, we’re going to have to see if this works. We have to decide if we’re happy. Secondly, we have to make sure that we can afford this. We think we can… [but] we’re not 100% sure that we are going to be able to maintain this complete level of service.”

One of the downsides of the SLA is that the University is raising its non-academic service fees from $580 to $672 per year to cover the money being given to OUSA. Normally, OUSA would be stocking up on megaphones and banners to protest this sort of fee hike, but since OUSA were the ones who set up the agreement, they can’t complain on behalf of students. Young Nationals Southern Region Chair James Meager says OUSA has lost its independence. “OUSA are in an incredibly precarious position – how can OUSA sit there and argue against rising fees for core academic services, but then go cap in hand to the University to fund their Future DJ Competitions and refurbish their squash courts?” ACT on Campus Otago President Kim Hannah provided even stronger rhetoric: “OUSA has lost any legitimate claim to being a representative of student views… [OUSA] has no moral authority to pretend to students that it is protecting them against its University paymaster.”

Edgar accepts that to a certain extent the SLA “compromises our position to speak out”. But he’s confident that for 2012 at least, he can safely criticise the Uni without fear of repercussions: “I’m not gonna let a dollar or a contract get in the way of opening my mouth and letting the wind blow my tongue around.” Edgar cites his current campaign against the University’s support for a liquor ban on North Dunedin streets as an example of sticking it to the Uni. Edgar did express some concern that “in the years to come the purse strings could tighten, and the execs could be made to keep quiet by things that were popping up in the Uni”. He would “love to think that 10 years down the track we wouldn’t have to have an SLA”, and is “working towards decreasing dependency on University money”. OUSA has also built up a large stash of treasure over the years, thanks to “penny pinching” by previous execs.

At this point, the interview was interrupted by OUSA Welfare Officer Francisco Hernandez, who burst into the room saying “sorry, just getting my lube”. After retrieving the relevant lubricant, Hernandez left the room, having provided Critic with some cheap laughs. Edgar insisted Critic “run wild” with speculation as to Hernandez’s motives, and a full-length feature article on the subject is planned for Issue #4.

Poking the Beehive – prepare to be stung?

As the University acknowledges in its 2012 budget, the National-led Government “has brought a greater focus to the return the Government receives for its investment in tertiary education… given the current national and fiscal outlook”, which is a tactful way of saying the Government is reining in the horses of tertiary expenditure. Tertiary Education Minister Steven Joyce wrote a “Ministerial Direction on Compulsory Student Services Fees for 2012”, which restricts the types of non-academic services universities are allowed to charge for, with the objective of ensuring “accountability in the use of compulsory fees for student services”. The University is required to report their non-academic service spending to the Government at the end of 2012. But it appears the Directions are about as effective a deterrent as a “beware of the dog” sign at a poodle sanctuary. The Vice-Chancellor says the Directions didn’t actually prevent the University from charging for any services they wanted to charge for.

Right-leaning student groups have expressed disappointment with the SLA, with ACT on Campus Otago arguing that the Agreement “fundamentally undermines the purpose of the legislation”. Hannah argues that it is the “right of students to choose for themselves what association, if any, will receive their money in return for the services and representation they want”, rather than being forced to fund OUSA via the Uni. The Young Nationals Southern Region are similarly miffed, with Meager describing the SLA as perpetuating the “unjust waste of students’ money”, where the majority of students are forced to pay for “ski trips and rowing facilities for the minority”. “What does funding a radio station that nobody listens to, or an Aquatic Centre which only a minority of elite rowers use, have anything to do with getting a degree at the Uni? The Uni could find themselves under very close scrutiny by the Minister.”

Edgar countered that “the Ministry wanted this mechanism to be in place. It’s perfectly legitimate.” The VSM Act specifically allows students’ associations to be contracted by universities. The University also argues that OUSA’s “very valuable” student support services are a key part of the university experience. Only time will tell whether the Minister will crack down on SLAs like the hammer of Thor, or whether the battle of the students’ associations is over with victory to OUSA.

According to the Vice-Chancellor, the University now has a “real trusting relationship” with OUSA. The VC is even running a barbecue for OUSA on sports day. Edgar says OUSA is in a “honeymoon period between us and the University.” Awww. Edgar is now aiming his guns on what he calls the “real anti-student villains” – including Studylink’s terrible customer service. Now there’s a battle we can all support.
This article first appeared in Issue 1, 2012.
Posted 3:46pm Friday 24th February 2012 by Callum Fredric.