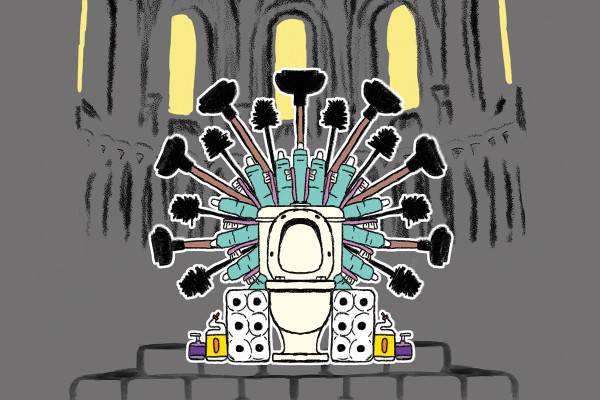 To pee or not TP: An Unhinged Bog Roll Review

Buying toilet paper is never fun. The options are overwhelming, the strange metrics require 100-level calculus, and it’s always somehow a little embarrassing. What if someone sees you buying it and finds out that you shit? Critic Te Arohi decided to face the issue asshole-on, and subject one reporter to bigger embarrassment. You know, for the greater good.

As someone who regularly spends entire weekends on the loo, I figured I’d be perfect for the job. Yet nothing has ever humbled me more. The pace was set right from the start, when my card declined at self-checkout with seven packs of toilet paper⎯and only toilet paper⎯that I was trying to cram into a small wagon to wheel home. I was hoping I was dressed punk enough that I looked like I was gonna TP someone’s house, but I know what everyone in Gardens was thinking: “this bitch shits.” And shit I did.

I arranged the doomsday prepper’s wet dream of loo rolls on my bathroom floor, making sure they were in arm’s reach of the throne. It was more than my tiny bathroom could handle. I couldn’t tell if this show of toilet paper wealth would scare off unsuspecting guests or get me laid as the apocalyptic asset I am. The day of the experiment came, and I was more than ready—I’d had someone over that night and been too self-conscious to take a dump in their vicinity, and my bowels were furious about it. I’ll spare you the details, but my hot girl IBS and general lifestyle choices ensured that this was a thorough test, one involving many fluids throughout the weekend, and also regrets.

As well as the, uh, more practical applications, I tested somewhat more scientifically by wiping three sheets of each on a damp sponge, to eyeball absorbency as well as how much they peel. The three sheets were folded and then scrunched, to appease all parties, and then received three wipes across the surface of a saturated kitchen sponge. I have no reason for choosing threes, but it’s Biblical, I guess. No one likes those little dregs of pilled-up TP up in their crotch, especially those with vulvas who use more TP anyway, and I usually spend more to avoid this. Maybe it’s just me, or maybe you have lint in your dryer too, if you know what I mean.

While most of the brands tested are owned by the same corporation, there were marked differences. Critic has previously covered the allegations against CottonSoft, which produces Value, KiwiSoft, Paseo, Pam’s and EarthSmart, as well as CottonSoft toilet tissues. This was six of the seven brands tested, which all varied wildly in quality, begging the question: Do they just want to watch us suffer?

First impression: Bleak. Demoralising. Like spending forty days in a completely white room, and emerging a changed man. Your loved ones won’t recognise you.

Performance: Absolutely cooked. This toilet paper was so thin I swear you could make rice paper rolls out of it. If toilet paper is usually made from wood pulp, this shit was made from the drywall crumbs on your flat carpet. No substance whatsoever, like the radical centrist of loo roll. I went to damp sponge test it, but the humidity in the air made it decompose into soggy rags before it even hit the surface. I accidentally breathed in its direction, and it got so wet that Ben Shapiro emerged and debated its existence.

Takeaway: Not to be used if you Value yourself

First impression: This goliath of a bulk pack became what I rested my feet on while straining to review the others. When I put weight on it, a high-pitched scream burst out through the plastic wrap. I screamed back in response. The kiwi on the logo has cold, dead eyes that see all. Chilling.

Performance: Honest to god feels like the napkins Bunnings snags come in, right down to the trypophobia-triggering texture. Super scratchy. In the damp sponge test, it was already disintegrating on the first wipe, and by the third my fingers had made full, intimate contact with the sponge. Not amused.

Takeaway: The name KiwiSoft is either a cruel joke or a cutting commentary on the state of toxic masculinity in New Zealand, because it most certainly is not soft. It’s also barely even Kiwi.

First impression: Though the embossed cloud design is a nice touch, the promise of “cotton soft” takes a lot of nerve. I do not appreciate it in the slightest.
Performance: If you were to forget whether this TP is two or three ply, don’t worry—it reminds you! It basically shatters on impact, splitting into two wafer-thin sheets that float mournfully onto the ground. In the distance, a child shrieks. In the damp sponge test, it disintegrated entirely by wipe number three. I wanted to cry, or maybe call the cops.

Impression: I don’t know if it’s because they’re produced by a different company, but they have a markedly different appearance and feel. The texture is more like crepe paper, and the pattern on them is slightly unsettling, almost like a paisley print, which you can definitely feel.

Performance: I wanted to like Purex as the underdog of the group and the last bastion of hope in the face of megacorporations, I really did. It was soft, but weaker to use both practically and when tested, completely dissolving on the second wipe of the sponge. My notes from the test say “I will kill the squashy dog with my legs.”

First impression: Being a classy female lady, I opted for the botanical print to match my classy female lady lavatory. I thought it was just an attempt at aesthetics, but really it’s tactical camouflage; the people that use this absolute unit of a loo roll are the sort of people who shit in the woods. You know, lumberjacks, trampers, kids who think they’re bears. Those sorts of folk.

Performance: In my phone notes (recorded mid-shit for real, on-the-ground journalism) I simply had “feels like a thick wool blanket”, and I stand by it. Like, not necessarily a soft one, but imagine, if you will, the plush coarseness and frightening density of a decorative throw pillow against your anus. It does the job, and it does it well, but do you really want it to?

Takeaway: Cost-effective, utilitarian, reliable. I respect it, and will definitely purchase again, yet it scares me.

Impression: Kinda seems like a tactical greenwashing branding decision, especially compared with the similarly styled Earth Care brand that’s also on shelves. However Earth Care, unlike EarthSmart, is not owned by a corporation that contributed to deforestation in Sumatran rainforests.

Performance: Soft, which you would hope for at the price, but tears kind of awkwardly and sometimes the layers come apart. In the damp sponge test, EarthSmart survived three light wipes, but left large amounts of clumps after the first one, like paper shredder confetti.
Takeaway: Mid. Soft and semi-durable, but leaves more residue than I would want, which is none. Not to mention suspiciously marketed.

Impression: Opulence. Bougie as fuck. Stylish yet understated embossed leaf pattern. If this toilet paper was a person, she would trail me around department stores and accuse me of shoplifting.

Takeaway: This TP receives a sitting ovation. I’m naming my firstborn child Paseo. Like, ‘Seo for short could be cute, right?

*Price per ply was calculated by dividing the price of each roll by the number of sheets in each roll, and then further dividing by the ply (2 or 3) and is in cents, not dollars.