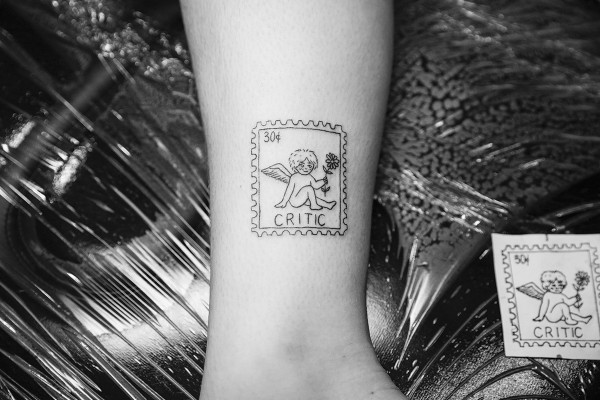 Tips from The Tattoo Tour

University is all about reinventing yourself, discovering who you really are, and the earth-shattering realisation that you ain’t shit compared to everyone else. Luckily, this particular existential dread has a remedy! Start altering your appearance, whether that’s dying your hair, getting piercings, or my personal favourite: tattoos. But where to start? To give the students of Dunedin the best advice, and a look into some of the best places to get some sick body art, I embarked on my ultimate tattoo tour of Ōtepoti Dunedin. Cue guitar solos and a frantic stockpiling of socks to hide the evidence from my parents.

This entire quest was triggered by an Instagram frenzy. I had entered Eloise’s giveaway for a free tattoo of the winner's choice, and as God’s favourite, I won. But like most things, once my too-much gene got going, I couldn’t stop at one tattoo. This must have been what Frodo felt like when he saw the Lord with the Ring, or something. I dunno, I’ve not seen the films.

I had to get tattoos from every tattoo studio in North Dunedin (anything five minutes past the Octagon is practically another dimension to me). And it would all start with Eloise. Her preferred fine line style gave me plenty of inspiration. The base of every tattoo would be a postage stamp, with the artist able to put whatever they wanted inside it – within reason. And since the entire tattoo was free, the time would never be more opportune to secure my journalistic tenure, and get “CRITIC” tattooed on myself.

Eloise mentioned that her favourite tattoos had a lot more to do with the clients than the actual tattoo. “It could be a fairly simple design, but who the person is and the conversation they bring with them makes me remember the tattoo fondly.” With that in mind, I was determined to make a splash and bring my wittiest banter and retorts, as well as garner some good advice for all the students of Dunedin, looking to get their first or maybe seventeenth tattoo. “Research an artist that matches what you’re wanting to get and make sure to speak up if you want to adjust something or if your design isn’t quite how you want it”, said Eloise. Solid advice. After all, this isn’t something to be undertaken lightly, like a commerce degree.

Eloise also commented on the psychology of her subjects. “People often get in their heads a lot and hype themselves up to be more scared than they need to be. Just make sure you breathe and enjoy the experience.” Eloise noted that fine line tattoos are an incredibly popular style right now, and there were far more girls coming in for tattoos than boys. I guess it’s true what they say: men are weak. “[Fine line] would probably always be a bit of a trend but definitely I see a lot of influence from Tiktok, so whatever’s popular at the time on there will often sway a style or type of common design.” Glad to see that if individual thought was dynamite, the student population wouldn’t even have enough to blow ourselves up.

Cornerstone is unique with their 10% student discounts. “We understand that Dunedin is a very student-based town, where student life can be a bit tough due to limited amounts of income, but we still wanted to be able to give students affordable options to things that could make their experience a little bit more fun.” Unfortunately, Eloise has since moved her work to Auckland, to which I wish her best of luck. Cornerstone’s 10% discount is still available at their studio for any thrifty bitch with a student ID to take advantage of, and if you’re up in the Auckland end of the country, Eloise will give you an excellent tattoo.

Student Clientele: “I would say about 85%.”
Favourite Movie: “White Chicks or 2004 Dawn of the Dead.”
Favourite Song: “Honestly couldn’t pick, I love all genres and music.”

Subconscious Studios feels like if that supportive English teacher decided to quit teaching after their maternity leave and open a tattoo studio (in the best way possible). The spot features plenty of plants and inclusive messaging, as well as frequent walk-in flash days for anyone willing to get up early enough to wrestle a spot. One flash day had students lining around the block at 4am like Victorian children in a Dickens novel waiting for soup, even though doors didn’t open till 9:45. The early bird gets the ladybird tattoo, or something.

Subconscious Studio’s contribution to my leg was courtesy of Kesi, who has been tattooing just over two years now. Although trying to pitch ‘literally just do whatever you want within a postage stamp’ can be a bit of a weird sell, Kesi handled it like a champ, and used the opportunity to practise some perspective skills. My hopes were dashed to become Kesi’s new favourite customer as they told me about Carol, potentially the most wholesome person in Dunedin, who got her first tattoo, at age 66, of a ladybird.

Not all customers are created equal, though, and to distract me from the needles that were getting close to my ankle bone, I heard about a best friend tattoo gone wrong. “When I first started I had a couple friends come in to get matching tattoos from me. A couple weeks later, one of them came back and they had stopped being friends. They didn’t get the tattoo covered up, at least not by me!” One can only assume they met in O-week, on the same floor in the hall, besties forever, before someone’s Glassons corset top was stolen and they realised they were fundamentally incompatible. Oops.

Kesi’s recommendations for tattooing were all about finding an artist you vibe with. “Please research your artist! This is the most important thing. Find someone who tattoos in the style you like. If you feel uncomfortable or pressured at any point in the process, speak up or leave the studio. It’s your body and consent is the most important thing with tattooing.” What are the designs hot on students' minds right now? “Always popular are things like Roman numerals and butterflies. I tattooed a frog on a client a year or so ago and ever since then it’s kind of become a thing for me to include a frog in every flash sheet so I’ve tattooed a lot of frogs. Florals are always a classic.”

Student Clientele: “I’d say a good 60% are students.”
Favourite Movie: “Anything with Winona Ryder in it. One Flew Over the Cuckoo's Nest, and Howl’s Moving Castle.”
Favourite Song: “I really like songs by AJJ and Kokopelli Face Tattoo.”

Bailee has been tattooing for about a year and a half but has been with Agency Tattoo much longer. Agency is as professional as it gets, the kind of studio you could bring your Grandma to and assure her that yes, it was hygienic, and yes, you can still get hired with tattoos.

Armed with a squish ball for the pain, I was a very brave girl as Bailee got to work on my next postage stamp: a sleepy fox in a mushroom forest. Although I normally would immediately slander and reject anything with British associations, it was cute enough that I had to have it. Most students are after similarly fine lined and simplistic tattoos, and Bailee echoed Eloise in students' inspiration. “I notice a lot of students want Pinterest tattoos. Or more recently TikTok tattoos. Tattoos on these sites are normally fine lined and simplistic. Generally though it’s small simple tattoos with mostly line work.”

Bailee’s own favourite style is a mix of everything. “I wouldn’t say I have found my favourite style yet. I like doing a variety of different things, always mixing it up.” Currently, her favourite work is a dragon back piece she’s chipping away on. “I love it ‘cause it’s my first back piece and I just love dragons, plus I am really proud of the design and placement. It’s just a fun piece, simple as that.” Her advice for getting tattooed? Same for anyone’s first time: start low and go slow. “I’d suggest thinking hard about placement and size. Don’t choose something massive in a super painful spot. You don’t want to put yourself off tattoos for good! Start small and simple and then once you know how it feels go bigger and bolder.”

Nicola Jane has been around the block, doing tattoos full time for over eight years, and has been tattooing in Dunedin for four and a half years – the perfect woman to complete my quest. George Street Tattoo is a co-owned venture with one of Nicola’s best friends, Dom, and it seems Nicola was divinely destined to tattoo, as she had been curious about tattooed people when she was younger and started getting tattoos as early as possible. Given the fact that she too hails from Lower Hutt, I knew I was in stable hands.

When it came to specific styles, Nicola thought more about longevity. “Personally, I think it’s important to take into consideration how a tattoo is going to look in 20/30 years, so I tend to reference trad images a lot in my designs. I have seen in the flesh how well they hold up over decades and that style is built to last!”

George Street Tattoo had customer service built to last as well. I rolled up, shades on (it was a bit of a dusty Sunday morning), and within minutes I had a Sprite and a hash brown in my hands. Nicola even had the kindness to ignore my tears as I devoured the hash brown. With She-Ra playing on the TV, my cowgirl postage stamp came to fruition and Nicola told me I had permeable skin (which I quickly started bragging about), as well as giving me some actual advice. “Your first tattoo doesn’t have to be meaningful, it can simply be something you want because you like it.” With an ankle full of aesthetic-only tattoos, this was incredibly validating for me. “If you’re apprehensive, get your first tattoo somewhere that’s not front and centre and be open to your tattooer's suggestions on placement. Find an artist you resonate with as well.”