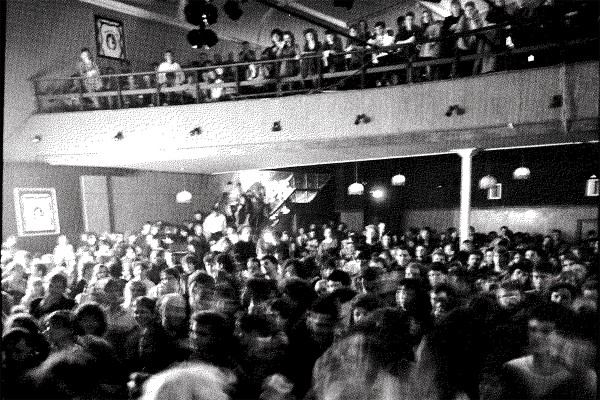 Your Inalienable Right to Dance:

Dunedin is known for its music scene. The 1980s saw the rise of ‘the Dunedin Sound’ which inspired international acts like Pavement and R.E.M. The 2000s saw the emergence of the beloved surf rock genre, with acts such as Six60 dominating the New Zealand music industry. In its heyday, Dunedin had venues coming out the wazoo, with multiple gigs on every weekend. But our current situation looks a little different. Never before has there been such a lack of student bars, venues and spaces for our musical community to thrive, and with that crisis has come a movement to “reunite people with their inalienable right to dance”.

On Sunday, April 10th, a group of Dunedin bands broke into and hosted a gig at Sammy’s, a former nightclub purchased by the DCC in 2017 that remains empty. The illegal gig was dubbed the “Felonious Fandango”. “We really wanted to dance, and it was clear we wouldn’t do any harm,” explained Matt*, the organiser. “We’d always had our eye on [Sammy’s]. It's probably one of the best stages in the country, and it has such an amazing history, some really important bands have played there.” Determined to continue the legacy, the musicians formulated a plan to play the one-off gig, one that they believed was safe, secure and created a space for people to have fun. The bands donated their time, as they felt it was an important thing worth doing. “In my mind, the amount of work you do as an artist, regardless of how much you’re paid, requires so much passion and work, it’s nice just to get together and forget about any sort of economic input. We just really wanted to dance.”

The organisers say they made sure that all the fire exits were clear, and hazards were signposted. They had food, water and a police scanner to keep an ear out in case they got busted. “We were very nervous,” said Matt. “We went in on four occasions prior to the gig to check the power, tested anything that could’ve been an issue, and kept it closed.” The organisers considered the event a success, with over 100 people in attendance. While Matt doesn’t believe that Sammy’s itself should be reopened given its age and location, he said he believes there should be more medium sized venues around the city when it comes to viable and long term options. “I would really like it if the people in power recognised this city needs more cultural life. It would be great if we could get more music venues, there’s a lot of abandoned buildings that are ignored,” he said.

The DCC has been working on a Live Music Action Plan, and an update will be presented to council in July. The council’s 10 year plan includes $17 million dollars for a mid-sized theatre in Dunedin. While a final option has not been decided one, a DCC spokesperson said “Sammy’s was ruled out due to the costs involved and other constraints”. Responding to questions about the ‘Felonious Fandango’, the spokesperson also said the DCC was “aware of the recent unauthorised event held inside the building. The building was entered unlawfully and the matter has been referred to Police.”

Sam Chin, the original owner of Sammy’s, spoke to Critic Te Arohi when he found out about the illegal gig. “I heard about it and thought it was fantastic,” said Sam. “My only disappointment was that I wasn’t there.” The building originally opened as the Majesty Theatre in 1897, and remained a prominent theatre for decades before Chin began Sammy’s in 1983. Sammy’s was shut down in 2017 after Chin lost his liquor licence due to a number of safety and legal issues on the premises and, fearing it would be torn down, the DCC bought the building. Sam and his brother now run The Crown, one of the last remaining music venues in the city, which many bands consider the ‘final frontier’ of gig culture. Sam agreed that Dunedin is missing venues, and that there is a dire need for more support for our creative community. “The town is missing a venue that can hold 800 people. The Black Seeds are missing Dunedin on the tour because they’ve got nowhere to play. It’s disappointing to see bands missing Dunedin on the tours.”

Sam said that while there is a way out of this crisis, the solutions are tricky. “You need money for a start, Dunedin’s full of old money, but old people aren’t out there spending it, they definitely wouldn’t buy a venue and say ‘lets start doing something for the young ones’.” “These old buggers aren’t gonna risk running a nightclub or venue, but I’m all for someone taking the risk, I’m just too old to be doing that.” Sam added that if you were to go back to Dunedin 20 years ago, there would be 15 pubs with bands playing, but “now you only have a handful, not even that… The bands are struggling, the venues are struggling, everybody is struggling.”

Dunedin Mayor Aaron Hawkins agreed, and said that in the 20 years he has lived in Dunedin “there have certainly been cycles in terms of music venues, how they're structured, and the communities they've served” but that “the traditional model, where bands could play for free and the venue would recoup their costs across the bar, has become far more difficult to sustain. If we only have venues for hire, then that obviously makes it far too difficult for both local and touring bands of a certain scale.” Hawkins also said that “the covid protection framework saw artists as the first to be hit, and the last to recover, thanks to the restrictions on gatherings and now a degree of public reluctance. We continue to advocate to government and other funding bodies, alongside other councils around the country, for targeted support for the entertainment and events industries given the rough couple of years they've had.”

Max, the frontman of Hot Sauce Club at the “Felonious Fandango” said the current gigging situation is “shit” and that “there isn’t anywhere to play at the moment except U Bar, Dive or Crown. Anything else is impractical, at least from a student perspective.” Max also notes that the current lack of venues and creative spaces also impacts audiences and how exposed people are to music, saying that a lot of gigs are specifically catered to particular year groups and demographics. “U Bar is really exclusive to the student audience, I doubt anyone older than 4th year would go there. It makes it hard when you want a diverse crowd at your gigs.”

Not only is the lack of gig spaces a problem for Dunedin musos, but so is the lack of creative spaces in general. Creative and collaborative spaces are beneficial to the musical process, as it provides an environment for people to share and explore new work, to collaborate with others, and for those who are new to the scene to practise. “It gives us an outlet for all these ideas we have in our heads. It gives you somewhere to showcase that creativity and inspire someone else. There is really quite a flow on effect,” said Ollie of the Beatniks, also part of the Felonious Fandango. “You could have a mate who would have never even thought of picking up an instrument, and then they go see a show and think, ‘woah, I wanna start doing this,'” said Max.

The lack of venue spaces has caused musicians to try and find new ways to gig and share their music with the Dunedin community. One of the most popular ways to do this was to start playing gigs at flat parties, where there was no strict licensing, expenses, or regulations. Gigging at parties seemed to briefly become a viable alternative, but it still doesn’t generate quite the same magic. “House parties definitely have their place, it’s epic to have a disorganised rager sometimes, but it doesn’t compare to having a dialled in sound system with lighting and a sound guy at an actual venue,” said Ollie.

Save Dunedin Live Music was set up by local musical talent to try and solve many of these issues, and is now working with the DCC on a Live Music Action Plan, and the DCC has already committed funding. A DCC spokesperson told Critic that “venues are a focus of this work”. Additionally, Mayor Hawkins said that “there are active discussions with private developers” who are “looking at a new purpose built live venue to sit on the stadium precinct.” Hawkins said that “this would add to the options for mid-sized acts, local and touring, but it is still a couple of years away from bearing fruit”.

The musicians' messages to the council are the same. “Give us venues, give us support,” said Max. “There’s enough bloody bands in town, where are the venues?” Ollie said, “A lot of people feel the same way, not just musicians, but also supporters of music, a lot of them are disappointed to see what it’s come to.”