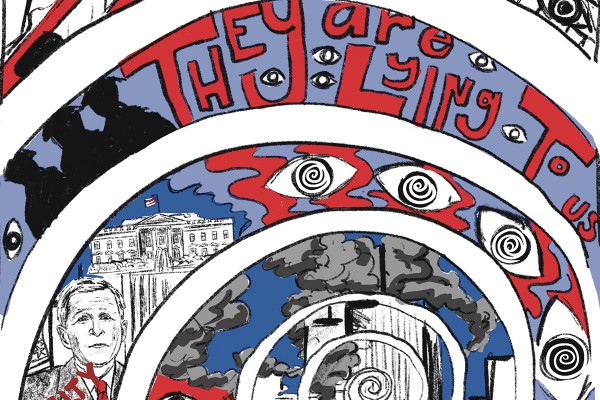 Chances are, if you ask any parent, friend or relative over the age of 30, they can tell you exactly what they were doing and where they were when 9/11 happened. The impact of 9/11 still persists to this day, along with the mountains of conspiracy theories that came out of it. The conspiracies that formed in the confusion following 9/11 would become the first major, global conspiracy theories to be fed by the internet. And while plenty of conspiracies had formed before, none would form and spread as quickly as the 9/11 truther movement - a movement that laid the groundwork for the post-truth era we find ourselves in today.

9/11 sent ripples of fear, paranoia and anxiety across the world, and really set the tone for the years to come. After 9/11, gone were the days of leisurely travel or the ability to take mindless walks around major cities. It’s like our generation was born, 9/11 happened, and then we just never had a good fucking time.

What makes 9/11 a particularly interesting conspiracy case study is that it coincided with the rise of the internet. The internet and rise of global media provided a whole new platform for people to spout whatever whack theories they had come up with, perhaps as an attempt to process what was for many the most shocking event of their lives. Because of this, 9/11 not only changed society, but it also marked a turning point in the way that people engaged in online conspiracy. Society at large was free to raise scepticism about the government with far less oversight, on a medium that allowed them to connect with anyone, anywhere, any time.

Although it was over 20 years ago now, the conspiracy theories that came out of 9/11 still persist, with countless online blogs and videos claiming they really know what happened on that September morning. Apparently it was an inside job perpetrated by the Bush administration. Apparently the US military fired missiles that struck the Pentagon. Apparently the Bush administration knew of impending attacks, but decided to sit back and do nothing. Apparently it was the Jews, again. The list goes on, really, but one thing’s for sure: 9/11 brought out the good, the bad and the ugly of conspiracy theorists and government surveillance alike.

There are two specific conspiracy theories that prevail when it comes to 9/11. These two conspiracy theories are 1) that it was an inside job, planned and executed by the George W Bush administration, or 2) that the U.S Government knew the attacks were imminent, but decided to not do anything about it. The details these conspiracies hinge upon include the steel beam conundrum (the whole argument that the steel beams in the World Trade Centre have a higher melting point than aeroplane fuel, so therefore, there must have been bombs inside the building). Not only this, but many 9/11 “truthers” believe the motivation for 9/11 to be an inside job is further justified due to the United States’ interest in gaining more control and leverage within the Middle East for political and economic reasons.

Over the years, crazed conspiracy theorists have made an effort to compile and analyse every single photograph and video clip of the attacks, trying to find any hole in Bush’s alleged cover up. So let’s take a look at some of their claims.

So, let’s begin with the first conspiracy theory; was 9/11 an inside job planned and executed by the George W Bush administration?

It only took a mere number of hours after the attacks for conspiracy theorists to begin flooding internet chat rooms with reasons as to why 9/11 was secretly an inside job. Many argued that the attacks looked, visually, like a planned demotion of the buildings, which they sort of did. Apparently commercial flights were not capable of creating such a large and hot explosion, so there must have been bombs planted in the World Trade Centre beforehand, right? No, again, this is simply not true. While some conspiracy theories are harmless, this one definitely isn’t. It undermines and demonises innocent groups, and fails to acknowledge the real and truthful perpetrators of this attack. But perhaps the greatest flaw of this theory is that it operates on the basis that George W Bush had the intelligence and ability to plan such an elaborate scheme.

Now, many of you probably won’t remember him in that much detail, but George was a bit of a doofus. He could hardly form basic sentences half the time, let alone conspire a thorough and extreme terror attack which dismantled American society and killed thousands. This is the same man who once said “I think we agree, the past is over,” like yeah, no shit it is. Other bangers include “I know the human being and fish can coexist peacefully,” and “Rarely is the question asked: Is our children learning?” There was also the iconic golfing video of him saying “I call upon all nations, to do everything they can, to stop these terrorist killers. Thank you…now watch this drive,” as he proceeded to take a swing. In reality, Bush was really just a rich kid who was left to fumble his way through a multinational war and subsequent financial crisis.

Did the George W Bush Administration know 9/11 was going to happen, and did they just do nothing?

Now here’s where things get weird. While it’s pretty clear that 9/11 wasn’t an inside job by the Bush administration, there remains some validity in the claim that the government did know something was going to happen. While the Bush administration didn’t know what the exact, specific details were on the 9/11 plan, they definitely had been warned during the days before 9/11.

There are a multitude of reasons why 9/11 should have come as no surprise to the US Government. The first being that the rise in globalisation and telecommunications had facilitated an environment which allowed terrorist groups to thrive (or ‘non state actors’ if you’re a political nerd). Bin Laden and his buddies had been on America’s radar since after the Cold War, meaning that the rise of al-Qaeda and an increase in anti-American sentiment in the Middle East and North Africa had been brewing for a while. For decades, al-Qaeda had made persistent threats to the United States. They blew up US embassies in Kenya and Tanzania, as well as an American warship in Yemen, and they even denotated a bomb in a van under the Twin Towers in 1993. So, if al-Qaeda had been making these persistent threats, and was clear in their motivation to take down the United States, why wasn’t the attack prevented or detected?

According to American academic Amy Zegart, the Bush administration and the CIA received approximately 10 warnings about an imminent attack, yet decided to not do anything. The warnings came as late as August 6th, 2001, when the CIA delivered a message to Bush’s daily presidential briefing titled “Bin Laden to strike US soil.” Despite desperate calls from the intelligence community, apparently no attempt was made to prevent or mitigate the attacks.

Perhaps this is because the Bush team didn’t deem non state actors or terrorist organisations that high on their agenda. Instead, the US government was persistent in their sense of exceptionalism. So, while al-Qaeda was able to plot and facilitate their plan with the help of the internet and rise in globalisation, the Bush team continued to direct their time on combating the likes of China and Russia, which they deemed to be an actual, legitimate threat.

There were a variety of shortcomings and structural failures that contributed to 9/11, such as the decentralisation of the CIA, a failure to allow intelligence agencies to work together and share information, cultural pathologies, and a strong resistance towards new types of technology. Meanwhile, terrorist groups such as al-Qaeda adapted and embodied these new features. So, while it is clear that 9/11 was most definitely not an inside job executed by Bush, the conspiracists’ claim that the US government knew about the impending attacks is not entirely false.

And this leads us to where we are today: a world in which tiny groups of people, through use of the internet, can reach audiences across the planet. This can be used to facilitate terrorism, to monitor terrorism, or just to make memes. 9/11 was the first time that online conspiracy really took off, and people asked a lot of questions about the US government that the US government might not have been happy to see.

People were sceptical about the US government, and not without due cause. This is the same government that let the CIA test LSD dosages on uni students, lied about overseas engagements, and had been recently embroiled in the Nixon scandal. The young adults who took to the internet to raise their doubts had been raised in a culture of distrust for the American system, and the failures and moments of dishonesty from the American government allowed those conspiracy theories to feel a bit more possible.

We can see that today, too. When a government makes a mistake, or doubles back on a promise, there very well might be a good reason. But people can then take those inconsistencies and use them as “evidence” of a more sinister plot, like how Aotearoa’s shifting vaccine mandates were used as evidence that the government was priming us to assimilate into a New World Order.

9/11 set the tone for online conspiracy for the last 20 years. It showed how distrust can mutate into disbelief, and how quickly a healthy distrust of government can become an unhealthy obsession. It was a glimpse of things to come, and even today, in a world smothered in conspiracy, 9/11 still remains at the forefront of every tin foil-encased brain.