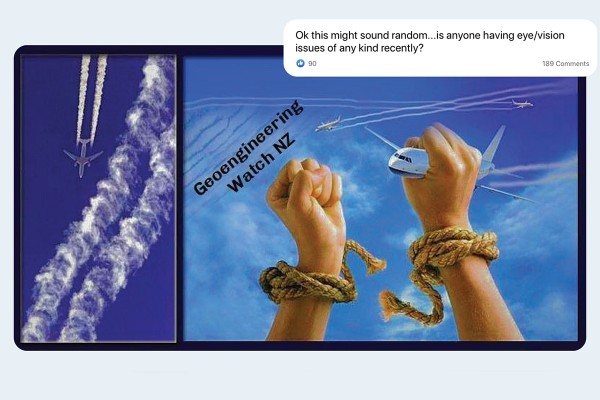 THE CLOUDS ARE FAKE ALSO CHEMTRAILS AND BILL GATES

‘Geoengineering Watch NZ’ is a Facebook group whose number one goal is “binging [sic] public awareness” about geoengineering. This includes the very real and important discussion around weather modification and chemtrails throughout Aotearoa New Zealand and the rest of the world. However, it is not uncommon to also see posts about water contaminants, 5G, alien cover ups, and basically anything else you could imagine. A recent poster questioned “Has Aunty Cindy and the medical army got m-rna conductors walking around after 2x?” Guess we’ll never know after the government brain-washes everyone to forget.

Most of the posts are literally just random photos of weather outside, claiming it’s all faked or polluted by chemtrails. They tend to be tinged with nostalgia for the days before aeroplanes put all these chemicals in the skies. However, commercial flights started in the 1920s and 1930s, meaning these people would have to be over 80-90 years old to remember the ‘good ol’ days’. Either way, the clouds are out to get you.

The type of content definitely has hints of trolls and fake-conspirators, but it is almost impossible to distinguish between the people who are genuinely terrified of clouds and those just shitposting in the group. A recent post reads “Weather Control Fire From Heaven with Mind Control 3Spririt like Frogs - VATICAN JESUIT owned CIA Cybernetic Hive Mind Beast System''. This was followed up with more unhinged hashtags including “Bill Gates Project Dimming the Sun”. Three different people looked at this and had  mental breakdowns trying to figure out what it meant.

Critic Te Arohi sat down with Caleb, who has been on the Facebook group for over a year and shitposts on it casually. After a joke went around his workplace, a vape shop, “We tried to convince the people on the page that vaping is the cause of geoengineering.” He posted “Common misconception in this group is that you can see the cloud seeding in progress but the chemicals used are invisible and atomised by the TFV12 dual Clapton coil in the tail of the plane. They use 35mg bottles to fill the atomiser and create huge clouds”.  For students who have crippling nicotine additions, this is evidently a fairly popular vape coil and juice strength. Caleb says this post was inspired “by the fact none of them can agree on anything. If they can believe this, they can believe anything.”

Caleb has yet to receive “any pushback on the more outlandish things I’ve said and posted, which makes me more enthusiastic about posting there”. His vape post had people agreeing, asking for more information, telling people to look up, and relating it to Bill Gates. That being said, there is no evidence that Bill Gates isn’t in kahoots with Big Vape, so.

The only common thread within the group is that they are all seemingly terrified of clouds. “They correlate everything to their field of clouds, essentially,” Caleb says. A majority of the posts on the page are just random photos of the sky asking other group members if they’ve experienced the same chemicals being poured on them across Aotearoa New Zealand. “Blaming basic symptoms on stuff like clouds is hilarious to me,” said Caleb. It’s not uncommon to see posters blaming headaches or nose bleeds on masses of water droplets in the atmosphere.

The group has a strong sense of community and camaraderie, as they have previously had Zoom meetings and petitions to “IMMEDIATELY BAN ALL GEOENGINEERING AND WEATHER MODIFICATION Top Secret programmes, activities and operations, including ALL National and International Government, Military, Commercial and Private entity involvement in Geoengineering and Weather Modification”, which was unsuccessful, to say the least.

What can you do to deal with the government poisoning in the meantime before bringing down that government? One admin suggests staying indoors when possible and “filter your drinking water, and thoroughly wash food before consuming and cooking”. While filtering drinking water is debatable, it’s always a good idea to wash your fruits and vegetables regardless. The admin clarified: “I believe it's a UN, military industrial complex operation, and likely controlled outside of this country… It seems to be a part of a world depopulation programme.” Ahh, there it is.

The group will accept anyone and welcome you with a post tagging you. It’s highly recommended to kill time between studying or if you feel like disappointing a climatologist-in-training from the Geography Department. Never forget (although it would be difficult to as this group will continuously remind you) the quote by former US President LBJ: “He who controls the weather, controls the world,” which is not something he has ever actually said.

We’ll leave you with this: have you ever noticed that Mount Cargill always has that suspicious cloud coming over the hill and “coincidentally” there’s also a 5G tower there? Think about it.