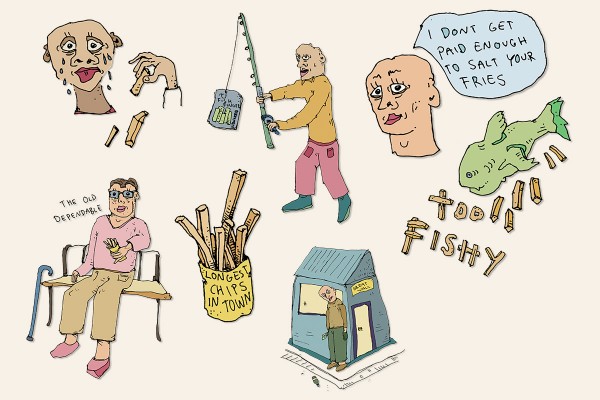 We all know fish n’ chips is the meal of champions, if those champions were hungover and on their last $10. That sounds like you. So for all you champions, Critic is here with the annual Fish and Chip review to guide your next weekend feed. We reached out to the best and brightest minds for this, but they were all busy – so the Critic staff rubbed together the last two dimes and brain cells hiding around the office to bring you a greasy, salty, and sometimes-flaccid tour through seven Dunedin fish and chip shops.

We’re not masochists
The only real barrier to Squiddie’s is that you have to pick between shoestring and crinkle cut fries. Of course the answer was shoestring, we’re not masochists. But the agreed consensus was that shoestring fries are not true chips. Can’t complain though. The fish (as pictured on the cover) tasted fresh enough, fresh oil at least, and a good batter-to-fish ratio. It’s a very generic taste, but at least the batter didn’t separate from the fish. It was alright. But hey, Squiddies has the best vibes. With homely posters on the wall and a diverse range of lolly bags, combined with an incredibly convenient location, this Dunedin institution will deliver you a somewhat-expensive feed that you’ll be decently satisfied with.

Cost: $8.50
Fish: 6.5/10
Chips: 7.1/10
Would they pick you up from the airport?: Yeah, Squiddies will come and get you but the ride back is always awkward ‘cause they refuse to let you play anything other than their CD collection, which has seen better days.

Texture like a corduroy jacket
There are people who have been through hard things in this world, struggles and strife. Soldiers have fought wars. Boxers have fought battles. But none have fought harder than those who defend Botantical’s hot chips. A majority thought these chips were terrible, with “texture like a corduroy jacket”. The chips were chunky, which definitely caused some derision, and ultimately these chips produced a very heated debate, hotter than the actual chips themselves. Botanical’s fish sported thick batter, coating a piece that tasted fishy to the point of suspicion, but it’s a decent bang for buck and doesn’t pretend to be anything it’s not.

A collective miasma of disappointment
Willowbank has grown complacent. This meal was eagerly pounced on, yet afterwards, there was a collective miasma of disappointment floating around the office. The chips were absolutely loaded with chicken salt, yet somehow still they were unevenly salted. To put it in very relatable terms, it felt like when you do a terrible job on your eyeshadow but you’re just about to go out and you really don’t have the time to fix it, so you just load up the mascara, and pray for some bad lighting to cover your sins. When it came to the fish, the batter looked mouth-watering, but it deteriorated incredibly quickly. ‘Chunky’ is not a word you want to hear when it comes to fish and chips at $8.50. Step up your game Willowbank.

Cost: $8.50
Fish: 3.5/10
Chips: 2/10
Would they pick you up from the airport?: No, and they say “no” in a way that makes you feel guilty for asking because of course they’re too busy with all those important appointments - but you then see them at the airport picking up their friend from the same flight. So.

Brutalist
Mei Wah is reliable, but that’s about as far as we can go. No surprises, some disappointments. The fish and chips themselves tasted pretty similar, texture aside. Batter around the fish was hard, brutalist even. The chips could use more salt, but hey. It’s no different than it’s ever been. Mei Wah is like the child that’ll visit you in the retirement home every week after Willowbank forgot about you four years ago. It’s a good feed for a decent cost, and Mei Wah will be here long after graduation, serving up rough-around-the-edges but comfortably dependable hot chips to all those who wander through their doors.

Mashed potatoes in the mouth
When the secret ingredient is love, the difference in quality is palpable. Great Wall did not make these chips with love. Instead, they made these chips with a mild fondness bordering on apathy. There was a lot of difference in texture, as if we got a cold batch of chips that was mixed in with a new batch and refried with the rest, and it all turned to mashed potatoes in the mouth. The fish was thin, but decently flakey with batter that was doughy but satisfying. Grease levels were also rather high at Great Wall, with spurts of grease periodically exploding onto fingers and laptop keys. Deviating from the trend, the fish at Great Wall was the star (marginally), rather than the chips.

Weirdly long and not at all wide (that’s what she said)
Texturally, Hao Chi’s chips were more flaccid than a penis at a retirement home. But taste wise, to be transparent, there were conflicting opinions within the office. Some felt these flaccid little feckers tasted like depression, some felt it was a solid chip. The fish itself was passable, not quite fresh enough to fall apart in your mouth, but still obviously fresh enough to know that it didn’t go into the fryer stale. Doughy mouthfuls of batter accompanied the fish, which was weirdly long and not at all wide (that’s what she said). One thing’s for certain, though: these fish and chips were solid in that dependable, yet underwhelming and forgettable way. Every city has a fish and chip shop like Hao Chi, just like every friend group has the person you forget to add to the group chat.

Recognisably Fish™
Camp Store (Tahuna), last year's champion, rolled out the red carpet with those little plastic aioli and tomato sauce pottles, elevating the sauce packet experience. Tahuna comes with salt packets, rather than presalted, forcing you to do unpaid labour. Although it’s nice for those who maybe have heart issues or something to have more control over their salt intake, if you’ve got those issues should you really be eating fish and chips anyway? It’s a nice gesture, though, and shows that they trust you to make your own decisions. The fish itself was excellent, flaky and Recognisably Fish™, and the chips were solidly finger-licking good. Although the shop is further away from the centre of North Dunedin than most, the fish is totally worth the journey. Tahuna is the younger sibling that always overshadows you, the student who barely studies but always aces exams. It’s a journey to get out there, but just like any gifted child, they require investment. They’ll perform incredibly well, but you’ve got to buy the tap shoes and really go out of your way to get that dance.

Cost: $6.50
Fish: 9.3/10
Chips: 6/10
Would they pick you up from the airport?: If they have literally anything else on, no. Their life is busy, and they’ve got greatness to chase. But if you catch them with some downtime, they’ll be there, and they’ll let you play whatever tunes you want on the ride back.