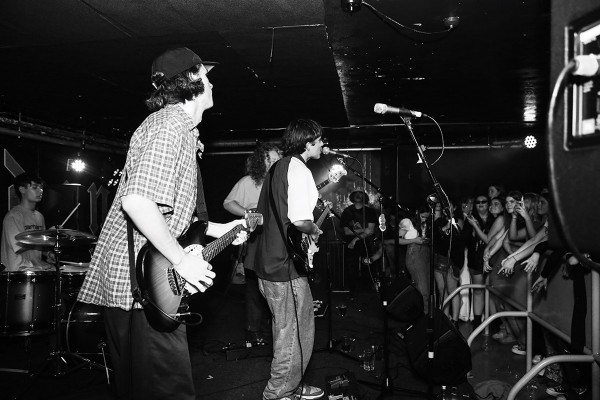 Hot Sauce Club are a recent band on the Dunedin scene. They’ve taken Dunedin by storm with a continuous series of gigs since their venue debut at Starters. Their Spotify is still in the pipes at the moment but check out their Insta @hotsauceclub. The band consists of Ethan and Logan on guitar, Max on guitar and vocals, Simon on drums, and Rory on bass.

Hot Sauce Club formed in late 2020. Max said: “It started out as just jamming in Cumby. Four of us were in Cumby, so we entered the Cumby talent show, and then we brought in Ethan at the start of this year. We kind of did the talent show just as a performance, not really entering. And actually nah we didn’t win it, some guy who was a marching drummer bet us, he was pretty sick.”

Logan says the name also comes as a response to their hall. “So we got back from Covid and started to notice that the hostel food was getting pretty bland. So a few of us just started collecting hot sauces to spice things up. Then we were looking for a name and were like what about ‘hot sauce club’ it's pretty catchy, you can do a lot with that and we just ran with it and it's been like that since.”

HSC is mainly promoting off of Instagram at the moment, but Rory says their Spotify is in the works. “We’ve got one [original] song almost all recorded as single and maybe we’ll record one or two more and release an EP. We’re just doing it all in house because we can’t really afford to go to a studio or anything.” Simon added: “We’re a bunch of poor breathers aye.” They’re planning to have a July release gig at Starters either for the single or the EP if they get it out in time.

Logan says things have been going fast since their first gig at Starters. “Starters was definitely the best so far, just because we weren’t expecting how big and sick it was going to be. It was crazy that we got the UBar gig though like everything’s been a sort of nuts ride ever since the Starters gig.”  At gigs, they mainly play covers but they’re planning on gradually introducing more originals into their sets.

Balancing social commitments and the band can be difficult at times. Simon recalls that he “had a red card before a gig on Saturday.” It didn’t go unnoticed, Max says. “He turned up pissed as, double Nitro down the drain just before we were about to start playing. But he ended up playing alright, it might become a tradition.”

“My rule’s always been you can’t drink water on stage,” says Rory.

The boys just practice in their flat. “It’s a pretty small room but it gets the job done,” says Simon. “We just got a brand new PA speaker too so we’re kind of blasting out the street at the moment,” says Max.