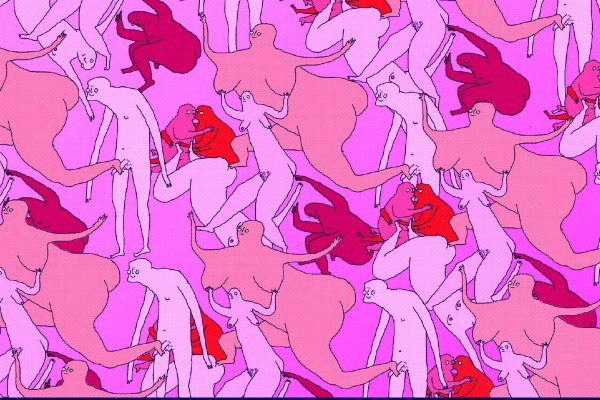 But let’s start earlier in the night in which I meet the man of my dreams. In the Gay world there are cruise clubs, where gay men meet to relax and have some fun. I visited one when I was traveling through Auckland. It’s not all glamorous as it may seem, a lot of old men, but everyone has their price. I had been there for two hours, but no one had really caught my eye so I sat at the back of the porn theater instead, small towel around my waist. In front of me there were mats laid out on the floor beneath the screen. Eventually a guy sat next to me (let’s call him Bigshow). I’m casually jerking off to the porn on the screen, showing off a bit, but I’m not really interested in him. Then in walks this daddy of a man, late 30's, I can see his muscles by the way his chest hair is formed. He had dark hair, kind eyes, lovely smile, scruffy facial hair but a full moustache. Think the dad from Inside Out. Bigshow begins to blow him, and I’m dying to get his attention so that I can join in on daddy’s dick. I show daddy what I’m working with and he seems down so he puts me up on the seat and blows me instead while Bigshow blows him. While this is happening, many people walk by and watch, occasionally touching to see if they can join in, but I wanted daddy for myself (well, and Bigshow). We blew each other, ate each other out, then made our way to fourth base. I usually am the one on top but for daddy’s dick I was willing to do anything and it was an amazing time. We finished together, cleaned up together, and at the end of it all he dropped me off at the bus stop.

I went home in love, full of semen, and unknowingly with Gonorrhea. Get tested frequently if you enjoy sex with multiple strangers. No Ragrets.