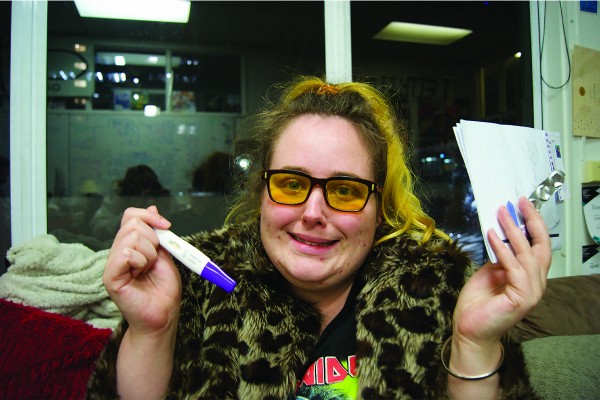 Editorial | Getting an Abortion is Actually Super Chill

To me, joking about getting pregnant and raising a child is the peak of comedy. For 99% of my life I had decided I never wanted children. Throw polycystic ovarian syndrome into the mix - a common symptom of which is infertility - and you have a recipe for a woman who shouldn’t haphazardly take her birth control, but does.

So, yeah. I got pregnant. Whoops. But I’m serious when I say that terminating it was chill. It hurt like hell, obviously, but it was essentially a belated miscarriage mixed with giving birth to a lentil. Let me explain.

Backtrack to a fortnight ago. I’ve missed my period, I’m bloated, and my doctor offered me three free pregnancy tests. Later that night, I’m staring at two pink lines.

I didn’t know that if you are pregnant, the test would immediately have two pink lines. I’d taken tests before and the boxes always say to wait a couple of minutes for the test to develop. I didn’t get the luxury of a 2-3 minute wait, it was immediate, and I was sceptical. A second and then third test did the same thing.

It took a proper scan for it to feel real. Before then, it just seemed hilarious that I of all people may have gotten pregnant. Like a kind of auto-schadenfreude. I don’t know why I thought I’d be any different.

But I’m not writing about this to flex how fine I was about getting the borty (I wasn’t fine, but I knew it was something I had to do - I’m not ready to be a mum). I’m writing this so everyone with a uterus knows just how little there is to be afraid of, and how much easier it is to get one since the legislation reform. I found out I was pregnant, and 36 hours later I was leaving the Dunedin Hospital day surgery unit (who I called directly in order to save GP money) with the pills for a medical abortion, all free of charge.

You can get a medical abortion if you’re less than nine weeks pregnant. We’re talking early stages – you’ve barely got an embryo until eight weeks, and nine weeks for it to become a fetus. I didn’t see the scan of my ute, but my partner did, and he described our not-child as a “translucent circle” which, by week four, had barely nestled itself in a ute wall.

I got to choose when I took the pills to terminate it. The day I did – the morning after the last issue of Critic went to print - I followed the booklet’s instructions, and took the pain killers and edibles I had (edibles were not in the instructions unfortunately) exactly an hour before I popped the four misoprostol into my mouth.

AND THEN… not much happened. It was super anticlimactic to begin with. After 30 minutes of the misoprostol dissolving in my cheeks, I realised that I still felt nothing.

For the first couple of hours, I honestly couldn’t help but think to myself: Did I just get high as fuck for nothing?

Then, the cramping got painful. Increasingly so. At first, walking around helped, but eventually I had to pop my first codeine. Once it was too painful to walk, I popped my second. By the third hour, I was escorted up the stairs to my bedroom and was in so much pain that I’d lost all colour and couldn’t speak, or even groan out in pain. It was excruciating. In silence, my partner held my hand.

At the 3 hour mark, despite the pain, I still wasn’t bleeding. The doctors had prepared me for this. There were two extra misoprostol pills I could take to help the process. I refused to at first, terrified for what it might do to the pain. By this stage I had taken three codeine and had a lot of weed, and it seemed like it was doing nothing. For context, the pills you take for this procedure soften your cervix while making your ute contract. You’re basically giving birth, albeit to a lentil. You contract and contract until you literally “expel” the pregnancy sac.

It felt like it would never end. Then, all at once, it did. I coughed, and a small bloody bullet shot out of me. I swear to God. It was instantaneous - that happened, and then the pain subsided. I sat there in shock, for the first time able to focus on my surroundings instead of the pain. I quickly realised I had sat up without any pain, and then stood up with the same confidence.

And… that was pretty much the end of it. Obviously I bled a shit load for the following couple of days, but I didn’t feel that agonising pain again.

The experience really, really made me appreciate the abortion law reforms. I later spoke to the doctor who helped me throughout this process, who said that pre-reform medical abortions had been relatively simple to get, too. But that was a perk of living in a city like Dunedin that has a hospital. For rural ute-havers, it was a lot harder. You were only allowed to have an abortion at a licensed clinic, which many smaller towns just don’t have. Not only did this mean you had to go out of town for the procedure (which you had to do on premises under supervision - you couldn’t take the pills home with you like I did), but you still had to get two doctors to say that you would be in “serious danger” mentally or physically if you kept the baby.

Now, you can self-refer yourself to whichever health centre, clinic, hospital, so on, has someone qualified to hand over the pills. For students in Dunedin, that can be the hospital just across the road.

Abortion is such a sensitive and taboo topic that it can be difficult to know how easy and shameless it is to get one. So, if there is one thing to take away from my fuck up, it’s that you should take your birth control. Also, that the sooner you see someone about an unwanted pregnancy, the better. There is free counselling and the team at the Dunedin Hospital are phenomenal.