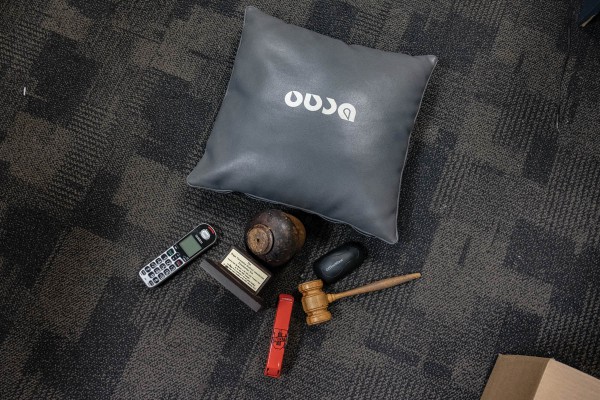 OUSA President Jack Manning is a very trusting man. He wears his heart on his sleeve, and he often keeps his office unattended with the door wide open. Often when he does this, it’s because he is in a nearby office or - more likely - in the Critic office being negged by our culture editor Caroline Moratti, host of the Critic Bachelor. During one leisurely afternoon visit by Jack Manning (during which he went hard on my staff’s hard earned vape juice), I wondered: what and how many things could I heist from his office and into mine, all while he was present, all without him noticing? Here is my haul.

This was my first steal. My heart was pounding. Next door to Jack’s office is the CEO’s office and I kept imagining that she would walk in on me. I was in too much of a rush to actually read the plaque on the stand that the gavel sits on, but after half a dozen later heists I felt comfortable enough to duck in and have a proper read. “Presented to O.U.S.A By J. Bruce Robertson, President 1967-8, And His Wife Lyn.” Curious, I googled him, and turns out that Bruce is the G-est of Cs. He was President of OUSA during a time where Otago Uni made it mandatory for flats to be gender segregated, and one student actually got expelled for breaking the rules. He organised a 1,500-person strong sleep-in at the student union building in protest, which actually works out to be over 26% of the student population at the time. That would be like having a sleepover with 4,500 students today.

Bruce later became a lawyer, then a judge, then a High Court judge, then sometimes the acting Chief Justice and Chief High Court Judge, and in 2010 got knighted for his services. King.

Retail value: Hard to tell, but Trophy Center sells a similar product for $108 so we’ll run with that.

This is probably the one thing I heisted that I won’t return without a fight. This is like the Rolex of staplers. The Rapid S17 - it’s red, Swedish, and built like the stapler equivalent of a strong jawline. It was still 4/5ths full of staples which means he either keeps her locked and loaded, or he doesn’t use her that often. Baby girl, I’d treat you so much better.

Like other things in his office, this is a fancy piece of stationery. This OfficeMax eraser is magnetic and is in the shape of a computer mouse because, according to OfficeMax, it “offers a better grip”. The eraser material has thinned down from overuse and when you look closely, you can see all of the OUSA secrets that have been written and removed from his whiteboard.

The phone was nestled in the furthest corner of his office from his desk. You’d think that would be a hassle, but it was soon clear that the landline is dead and probably never got used. Interesting choice of decor.

This knob is an OUSA Presidential heirloom that gets passed from president to president. It was originally stolen from a staircase bannister and later returned to its owner (well, renter. I wonder if this cost them their bond?) That owner? Grant Robertson, the 1993 OUSA President. It is just as much a tradition for the President to have this knob as it is for the knob to be stolen. Jack and I would know - I stole it from him not 10 minutes after he’d been gifted it at the 2019 OUSA Christmas Party. His eye contact fell out and he asked 2019 Critic Editor and I nicely to hold on to his knob while he fixed it. His back comically turned from us, I ran. I returned it near the beginning of the academic year for [redacted reasons]/lowkey king shit.

The pillow is a stiff, expensive-feeling fake leather. For something branded to the students’ association it’s ugly and uncomfortable af. Who ordered these?? It’s a super old OUSA logo, which means this pillow is over a decade old. Would it hurt a President to redecorate? President is a full time job bro, you can afford it.

Retail value: Although it’s definitely not real leather, the people who helped me cost this all agreed that it seemed like a high quality fake-leather. That, plus the fact that it is branded, means we retail these at around $50 each.