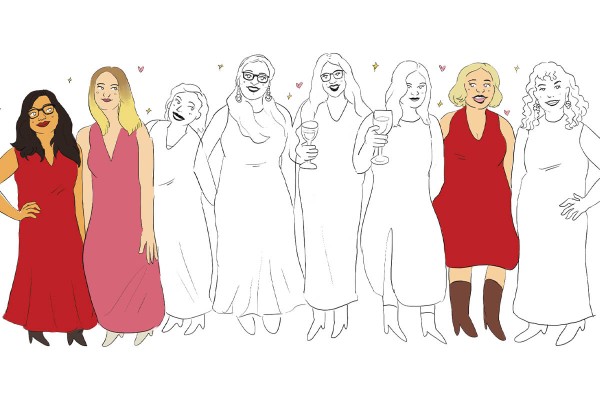 This week, group dates are on the agenda. Can Jack find love, even in a crowded room? On Monday afternoon, Sophie and Amelia met Jack for a romantic rendezvous through the Otago Museum. Critic had intended the group to take in the iconic sights of the Animal Attic (specifically the rat king) but Jack, swayed by the childish delights of the Discovery World, paid for him and the girls to attend the planetarium, butterfly room and more. Sophie confirmed that the group remained a solid trio the whole time, saying “there was no stealing, we’re nice people. Maybe he wanted to steal one of us away, who knows though.”

As to what the luscious thrupple talked about, the jury’s out. “We didn’t do a lot of talking, we just went through the activities,” Amelia says, letting our imaginations run wild as to what these ‘activities’ could be. “He asked us how our day was, and what our classes were like,” remembers Sophie. “We didn’t really talk about our other interests, we just talked about what was going on.” The girls were, however, stoked that butterflies landed on both of them— surely a sign of good luck and fortune to come? But no. Despite the initial heat of attraction, the date ultimately failed to reach lift off. When asked about her connection to Jack, Amelia is hesitant. “Um, hmm. Interesting. We went to the kids’ exhibit, so not the most romantic place. But like, he’s super nice, definitely not a no.” The lack of romance was also felt by Sophie, who said the date felt more like friends hanging out. “I feel like I still don’t know much about him, he needs to open his heart a bit more.” Jack conveys a similar tone, squeaking out a reluctant "eh, I mean, a bit!” as to whether sparks were flying. He thinks about the question, and manages to muster: “It was good, I like science, and they were very engaged and interested in all the stuff there, and they seemed to be very interested in what I was saying.”

In order to free one of these women from the confinement of small talk, Critic announced a surprise elimination. Jack is furious at the thought of losing one of his handmaidens: “Why? Why? Oh fuck. Oh God! I hate you for doing this, I hate Critic for doing this.” The ceremony begins, featuring Critic’s fabulous attempts at an origami tulip. He ultimately decides to keep Amelia. “Amelia’s butterfly was more impressive,” he says, unaware of the sexual innuendo he has just made, on the record. Once informed, he rushes to correct the sentiment, and comments that he and Amelia share a similar sense of humour. Sophie is sent home, but is ultimately good-natured about being freed from her bonds, saying “I don’t mind! I was kind of expecting it, I felt it. Maybe I’m psychic, or maybe I sabotage my chances?” She runs off into the sunset.

The second date takes place on Tuesday evening, with Jasmine, Georgia and Amanda given coloured pens and paper and told to go “draw something idk”. I was tired. The group took in the sights of campus, notably the paradise ducks, the Clocktower and AskOtago. Jasmine drew a duck, Jack drew AskOtago, Amanda drew her and Jack canoodling in-front of the Clocktower and Georgia drew a clock tower composed of penguins. The group supposedly had a lot of fun, with Amanda saying she loved (!) the date. “Cracked lots of jokes, had a good time, nothing more I want. It felt like we’d all been friends for years.” She had worn her best jeans to “show off my nice arse” and the trick had paid off. Reportedly, she made Jack laugh so “basically we’re in love. He seems really nice, really funny and sweet.”

Jasmine is slightly less positive, having come straight from work: “It was fine, I’m a secret artist, so lowkey love any moment to flex. But I was so cold and so hungry at the same time. Boy, I could use a sandwich right now.” When asked about her connection with Jack, she pauses for 19 seconds. I timed it. Finally: “Hm. I feel good, I feel good. Oh my God, I’m struggling. What else do they say? I feel like I’ve found my person.”

Georgia was reluctant to go into details, but admits that “I’m really far out of my comfort zone, so when I’m doing these things I’m always going to be a tad awkward, so I’m just standing there for the first 20 minutes, but I think once I started drawing I found my groove, and my personality started to come out—for better or for worse!” Aw, babe. On her connection with Jack, she seems genuinely sincere about her affections for the boy. It’s very sweet. “I think I get on with him well. I think what I’m hoping for is that I get through to one on one time. I don’t want to jinx it, but I feel like it’s good enough that I can progress. But I don’t want to be too self-presumptuous.”

The date finished and the girls ravished, it was time for Jack to eliminate a girl from the competition. “I hate you for doing this again, and Critic readers will realise you need to find better twists,” he moans, bitterly, under his bitter breath, clearly forgetting how the Bachelor works. His thoughts on the girls: “Jasmine. Incredible artist. Hidden talent, that was nice. Georgia. Really sweet and knows to reference Club Penguin unprompted, that’s always a good thing. Amanda was spitting the best chat about Bill; really high-quality chat.” His body starts to mildly convulse at the thought of such a passionate decision. Jack starts to mutter the phrases “rollercoaster of emotions” and “journey of love” under his breath. He’s ready.

With all the girls lined up, Jack reads their names off. Unfortunately, in the end, it was Georgia that failed to gain a single clove of garlic (our tulip origamist was off sick), thus eliminating her from the competition. She’s downcast but has plans to go to Maccas which, let’s face it, is more satisfying than any man's love.

Next week: Single dates. It’s fair to say Jack has to open up, and fast, if he wants to secure the ultimate love connection. Three girls, one man. What could go wrong?