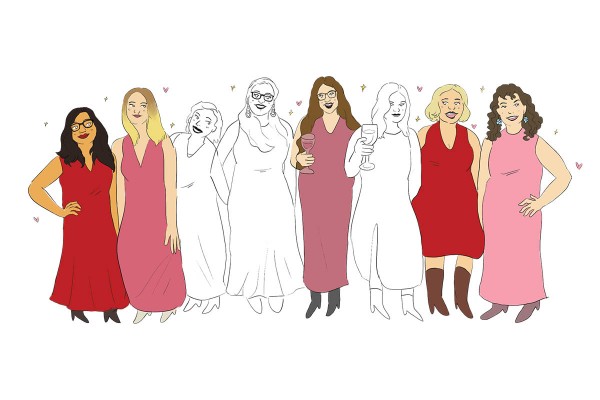 The Bachelor: First Date and Eliminations

It’s 5:30pm on a Wednesday and the first Bachelor group date is about to begin. Jack describes himself as “nervous, but excited”, laughing as he brushes his hand through his hair. He’s dressed in a form-fitting navy blazer and a crisp, oatmeal shirt. The girls’ profiles and first impressions are clearly on his mind: “They’re much better writers than me, so they’ll be bringing that into the relationship.”

The Critic foyer has been transformed for the first group mingle and elimination, complete with sushi and a horse blanket spread wide on the floor as a makeshift rug. The soft tones of Amy Winehouse serenade in the background. A single, unlit candle is centered on the table. The first girl, Simran, arrives on time, beautifully dressed. “What should we talk about? How do I do small talk?” Jack asks me, Simran right next to him. I leave the two to figure that out, the awkwardness of young love still palpable in the air. The rest of the girls appear soon after. After initial introductions, the group forms a circle around the food table, hesitantly taking pieces of sushi in between the small-talk.

Jasmine is the first to swipe the Bachelor for a one-on-one, the pair nestling on plastic chairs in the corner. Jasmine is sassy, brilliant, and quite simply, made for reality TV. Her and Jack already have a drunken history of kissing and she takes this advantage in her stride, laughing every time Jack talks. Five minutes in, Gemma interrupts the pair, craftily armed with a platter of sushi to entice Jack. Her ploy works; Jasmine walks away and Jack’s attention is turned.

When asked about her one-on-one time, Jasmine reveals that this was the pair's first sober conversation together, saying “I told him that his haircut looks really good, ‘cause he looked haggard as hell in lockdown.” The 25-year-old feels confident that she won’t be the first elimination. “I’m secure in my connection.” She suggests some future date ideas.

Meanwhile, Jack is now locked in a private session with Simran. He’s since undone his top button, showing a sliver of skin. They’re apparently talking about a mutual love of baking.

Simran divulges that she later told Jack about the first time she locked eyes with him - at this year’s Convocation Ceremony. “He just started laughing and I was like, damn, that’s such a cute laugh!” Critic will neither confirm nor deny the cuteness of Jack’s laugh. Despite their initial bond, Simran is nervous going into elimination tonight, because, as a first year, she is one of the youngest of the group. Can the 18-year-old and the 22-year-old make things work?

Watching the pair interact are Sophie and Amanda. Amanda is feeling “juicy” tonight, whilst Sophie is fretting about rice she’s spilt on the rug. “I hope he doesn’t notice that it’s me.” The girls have become good friends already through the process, and talk of brunch clubs and rejection groups is on the agenda. Realising that Jack is not going to attempt to mingle with the group anytime soon, Critic is forced to intervene. We split the girls in two and allot each group five minutes with the stallion.

The first group consists of Amelia, Amanda, Georgia and Sophie. The conversation apparently included their years at university, where they were from, and what halls they went to. The girls burst out laughing at this point in the debrief, and Amelia squeals, “I know he went to Selwyn and he didn’t even tell us that!” Despite this sticking point, everyone is feeling good about their chances, apart from one. Georgia murmurs “I don't know, I’m quite quiet,” looking down at the floor. The group rushes to reassure her: “Oh no! You bounced right off us. The team carried you, but like, you carried yourself!” Comforted by the power of female friendship, the girls continue to hype each other up.

Next up, the second group was Jasmine, Simran, Gemma and Annabelle. Annabelle is left feeling unsettled by a rather intense debate about peanut butter (she likes crunchy, Jack likes smooth). “It’s just not politically correct,” she laments. “I think I can look past it though, I’ve looked past worse things.” The other girls are fascinated by Jack’s tendency to take off his glasses during conversation. “Can he wear his glasses all the time?” asks one. “I don’t think he can see”, another says, “what, does he just not want to see me?”.

The time for elimination is fast approaching. Tonight, two girls will leave the competition. Critic pulls Jack aside for a quick chat to find out where his handsome head is at. After a bit of nervousness at the beginning, he says, the night has gotten more comfortable. “I got to know them and they’re all really nice... God, this is so diplomatic,” he frets. “They’re all hilarious.” However, he has some concerns surrounding age gaps and emotional connections. He’s ready to make his choice.

Jack enters the foyer, solemn. The music is turned off, the girls lined up. He starts his speech: “Hello. It’s good to...oh fuck. Firstly, I apologise in advance for forgetting your names if I do. If you see me on campus, please come say hi, or come to my office. I guess, the only thing I can say is, I feel fucking terrible about the idea of having to eliminate anyone from this.” With these words of poetry articulated, the selection gets underway.

The first girl called is Amanda. Instead of a rose, Jack hands her an electoral commission enrolment form, with the name “Miss Manning” written in the text boxes. “Amanda, will you enrol to vote?” She accepts, cheekily adding, “I thought you’d never ask!” The next names are Sophie, then Jasmine (“Yes, Mr President”). Each girl receives an enrolment form, a hug and a quick kiss on the cheek. The mood is split between celebratory and tense. Next, Amelia then Georgia.

Finally, there are only three left standing: Annabelle, Gemma and Simran. All beautiful, accomplished young women. Jack pauses, his voice hoarse with the difficulty of his decision. Finally, a single word: “Gemma.”

The room is shaken to its core. Jack turns to the Critic staff, his eyes searching. “What am I supposed to say now? What’s the script?” Silence follows. He turns back to two girls, and manages to muster a few words: “I’m terribly sorry, you’re both awesome, but I’m afraid this is goodbye. And make sure you’re enrolled to vote.”

Simran makes the first motions to leave, clearly saddened by the news. She tells Critic: “I feel okay, like I don’t really know? It’s fine, it’s all good, I already called it when I came in and I was like, yeah he’s not going to like me.” She walks off into the night, with plans to go dye her friend’s hair. Annabelle lingers, mostly because she’s waiting for Pint Night to start. She’s more upbeat about the elimination, saying, “in all honesty, I think in terms of keeping my professional life not awkward, it was a good idea. I also can’t be with someone who prefers crunchy peanut butter to smooth.” She pauses, a slow smile playing across her lips as she relives her memories of the night. “Honestly it was a really nice experience, I really enjoyed the food.”

Jack says his goodnights to the remaining girls. Small group dates are on the agenda next week and the room tingles with anticipation.

Later, Gemma will be eliminated via email after Jack discovers that she is also a first year, and sadly not age-appropriate to compete for his love. The 6 turn to 5. Who will win Jack Manning’s heart? Tune in next week to follow the girls on their journey of love.