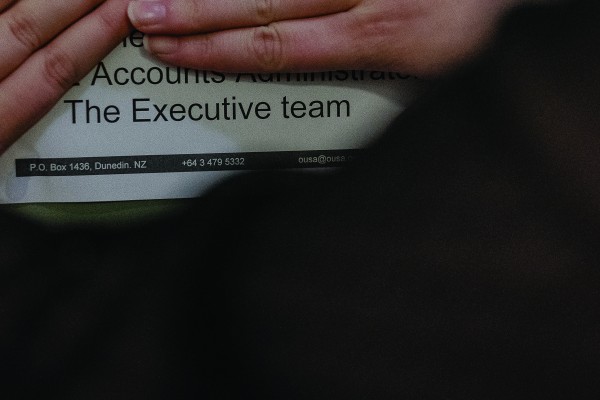 EDITORIAL: The Exec Are Too Comfortable Making Decisions Behind Closed Doors

Critic Te Arohi is famously anti-weed, so it’ll be no surprise to you that my hackles were raised when the Exec made the decision to actively encourage Otago students to vote ‘yes’ to cannabis legalisation in the upcoming referendum. I was raised Catholic; it felt sinful enough to be in the same rooms as these no-good bong-rippin’ commie student unionists, let alone hear them discuss corrupting our youths into sniffing the ol’ Dev’ Let’. But several hail Marys and a holy water bath later, I could still sense that something was a-mis, and it wasn’t the weight of my Catholic guilt because I moved in with my partner before marriage. It was my OUSA constitution instinct.

The student body elects the OUSA Executive. Each year, students give them the mandate to govern a multi-million dollar union. You pay their fortnightly wages. In exchange to bestowing this power onto them, they have to be transparent with their power - you are privy to the decisions they make, and you are entitled to observe them make those decisions. As exec meetings are as boring as sin, Critic is often their only guest, so the responsibility is on us to let you know what they get up to. We can’t do that if they do what they did with the cannabis referendum stance, and move the conversation and vote to a private Facebook chat.

If this decision had been made properly, Critic could report exactly which representative voted yes, no, abstained, or did not bother to vote at all. We know that six exec members voted yes, two voted no, and four did not vote at all. Critic asked each individual exec member how they voted, and only seven out of twelve Exec members responded. An OUSA spokesperson said that multiple members straight up do not want to share their vote. That is just bullshit.

There is literally no reason why they had to make this decision in such a dodgy way. The referendum isn’t going anywhere - they could have organised a separate, official meeting. But they just could not resist the comfort of making a huge decision without scrutiny. If it had been done properly, you would know exactly who had voted how, who abstained, and who didn’t bother to vote at all. You would know their justifications, their proposed compromises, and who was or was not engaging in the conversation at all.

This decision didn’t begin behind closed doors. The Exec probably didn’t even intend for it to end up that way. But during Covid-19, the Exec got used to doing things privately over Facebook. Unfortunately for them, we’re back on campus now; this habit needs to be broken, and fast.

Just how God and my nana are watching and judging me every day, Critic is watching you, OUSA. The world has changed, and I firmly believe that students will be more attentive to what you do this semester, too. No matter how positive the outcome may be, we’re not going to let you get away with dodgy shit. God bless.

If you happen to grab a copy of Critic early, come to the Monday exec meeting in the OUSA Recreation Centre on Albany Street. It’ll be at 11am in the Otago Room, which is the big room on the ground floor with the big windows that look out onto the street. Come blow me a kiss. Come hold them accountable.